Protesters gather outside of the Arkwright Town Hall Friday to show their opposition to the wind farm project.

Pictured is one of the wind farm construction sites off of Route 81 in Arkwright. 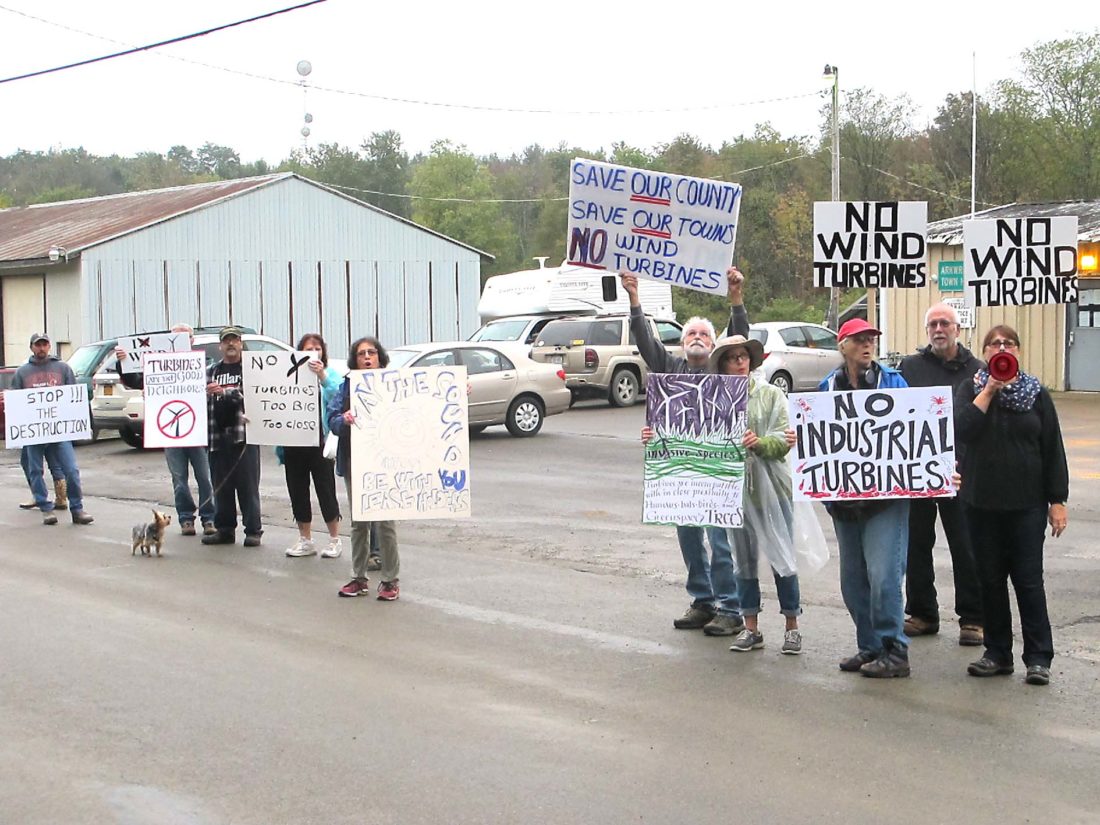 Protesters gather outside of the Arkwright Town Hall Friday to show their opposition to the wind farm project.

ARKWRIGHT — Members of the Concerned Citizens of Cassadaga Wind Project are protesting around the county to “raise public awareness about the impacts of these wind farm projects,” said organizer Joni Riggle. “If the public did their research, they would not want these farms destroying our rural and agricultural lands. There will be no gain from it. It will not mitigate global warming.”

Over a dozen concerned area citizens held signs in front of the Arkwright Town Hall on Center Road Friday and shouted into bullhorns to passing vehicles: “Save Chautauqua County,” “No Wind Farms” and even “Impeach Cuomo.” It was the second week in a row for the protestors.

Just west of the town hall, the construction is already underway as the project is in the process of clearing acres of woods to make way for giant wind turbines, each estimated to be upwards of 500 feet tall. Riggle and her organization claim these turbines not only will destroy the beauty of the landscape, they have the potential to contaminate well water and cause an array of health problems to neighboring landowners.

“We’ve heard testimony from Dr. Dan Driscoll of the DEC,” said Riggle. “He testified to a NYSERDA stakeholder meeting that infrasound from turbines can be harmful to human health, especially from prolonged exposure and that it is not blocked by our walls. It needs to be addressed. It causes symptoms like headaches, dizziness, nausea, vertigo. He recommends at least 3,450-feet setbacks; our towns are adopting only 1,000 feet to 1,200-feet setbacks and that’s an issue around the world.”

Riggle and many others in the group identify as conservationist who are as concerned about global climate change as anyone else and claim the real answer doesn’t rest with giant industrial projects, but with small-scale localized wind and solar efforts. 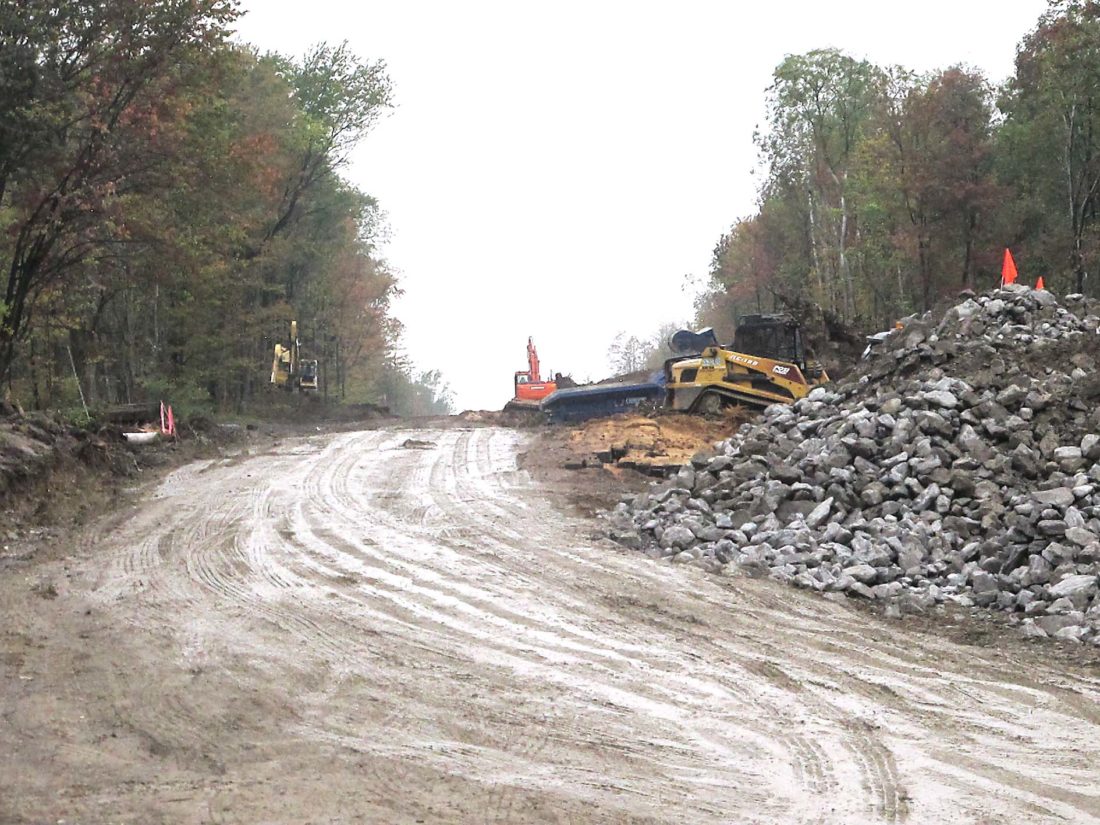 Pictured is one of the wind farm construction sites off of Route 81 in Arkwright.

When you factor in the construction and transportation of the turbines, Riggle said, “it takes the lifetime of a turbine to pay back its carbon debt that was used in the process of installing it.”

Then there’s the platforms the turbines stand upon.

“Each turbine base takes 90 tons of cement and cement is the second largest industrial producer of CO2, so we’re producing a lot of CO2 just to make these cement bases,” Riggle said. “Every ton of cement produces 1.5 pounds of mercury. So, there’s a lot of mercury released in the processing of … every turbine base.”

Area resident Bruce Roll, present at the protest, said that the lack of transparency between the government, industry and residents is perplexing and troubling.

“We were never notified of the project,” Roll said. “The only notification we got was in December of last year and then the project started in February of this year.”

Rob Bommer, who lives in Cassadaga, is weary of the wind project being planned near his home.

Riggle said that the wind project initiators “only target those who they know are in favor of it. The leasers, town boards, school boards (jump on board) after they dangle the money.”

Riggle says only a few get monetary benefits, while the rest suffer the consequences.

“Arkwright has town board members that are land leasers, so we see a real conflict of interest,” she said. “They’ve signed contracts with the wind company.”

Another protester said that it’s not illegal for the boards to accept money, but “it’s unethical. They’re receiving anywhere from $250,000 to $500,000 and they’re on the zoning boards and planning boards of Arkwright. The state had to release that information; it’s right there on the website.”

Riggle said that with all the wind farms that are planned for the near future, “there really won’t be any rural clean space or agricultural lands that are untouched. We literally will be one massive wind farm from the finger Lakes to Chautauqua County.”

The group contends that these farms aren’t even green, as advertised.

“They’re only 10 percent affective,” Riggle said. “They need almost a one-to-one backup of fossil fuels, which in New York is gas. The government has a misguided green policy. They think they’re going to save the day and that it’s a panacea; it’s not. These projects will not save the day. they’re not going to save us from global warming. They’re going to leave a legacy of a lot of destruction for the next generation to clean up.”

Riggle urges Western New Yorkers to “do their homework” and not to buy into the “propaganda” of the wind industrialists, because when it comes right down to it, by going in this direction:

“We’re destroying our environment under the pretext of saving it.”

Mark Twichell told the OBSERVER that Concerned Citizens of Cassadaga Wind Project has filed the first civil action against a wind energy developer and New York state since the adoption of Article 10. The importance of this action, regardless of its outcome, is the establishment of a public record detailing the various objections to rural industrialization by wind industry facilities. The Cassadaga action is expected to be followed by similar efforts in many other townships across NYS.”

“Of course there are local social media sites for public education about the negative aspects of rural wind industrialization,” he said. “The Concerned Citizens of Cassadaga Wind Project posts on their Facebook page, as does the smaller group Preservation of Agricultural Lands Serenity (PALS). These pages contain links and shares from citizens groups throughout North America and Europe.”