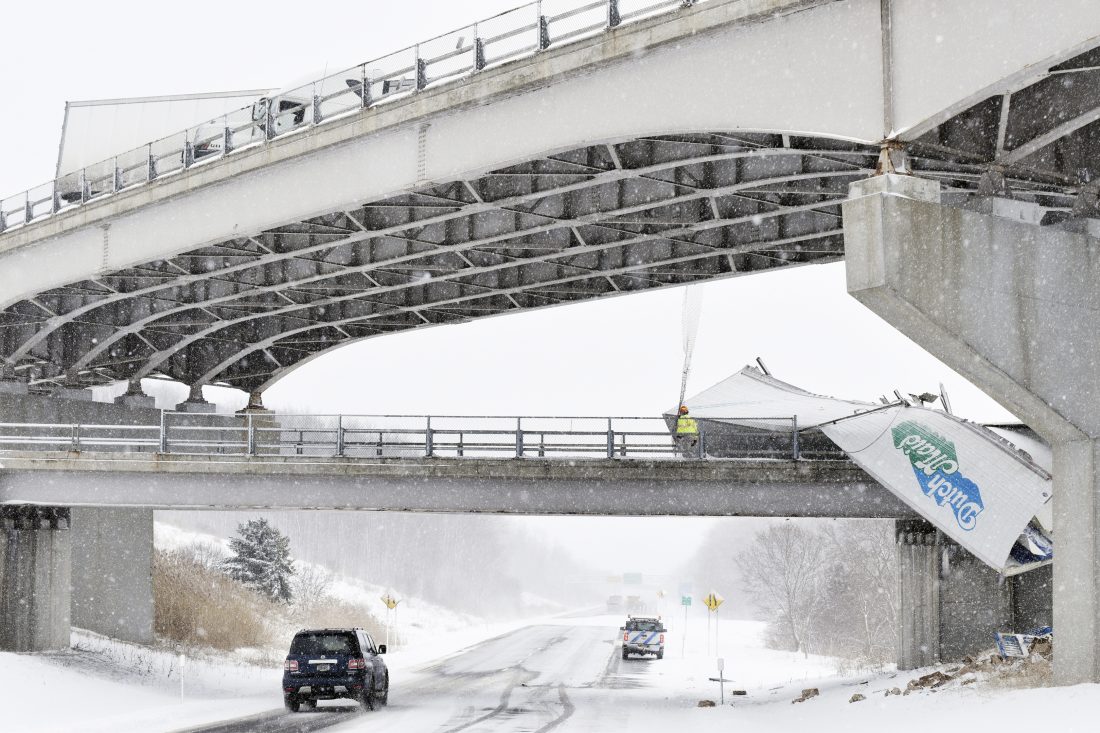 The westbound lane of Interstate 86 was closed for several hours following a multi-vehicle crash Thursday afternoon. The driver of a semi tractor-trailer was taken to Westfield Memorial Hospital for treatment of undisclosed injuries. Photo by Jay Young.

BEMUS POINT — A semi-trailer hauling an estimated 40,000 pounds of yogurt crashed down onto an access ramp to Interstate 86 on Thursday, sending its driver to the hospital and closing the westbound lane for hours.

The bizarre chain-reaction incident began after a tractor-trailer jack-knifed around 2:30 p.m., blocking both lanes just past the Route 430 turnoff. The crash was likely caused due to bad weather, Capt. Eric Balon of the New York State Police said.

Balon said another westbound semi then struck the immobile truck causing the trailer to disconnect and spill a portion of its load of yogurt on the road. The trailer continued over a guardrail and fell onto a westbound access ramp below, further losing its load.

The driver of the semi that struck the first truck was transported to Westfield Memorial Hospital complaining of left-side pain. The driver was later identified by the state police as Tommy L. Stacy of Marion, Ohio.

Volunteer firefighters from Bemus Point and Ashville responded to the scene. Members of the Chautauqua County Fire Police Team assisted with traffic control, and county HAZMAT crews were summoned after 100 gallons of diesel fuel and 15 gallons of oil spilled.

The westbound lane was closed to traffic beginning at the Strunk Road exit.

Balon said secondary crashes were reported as a result of the I-86 collision and due to stopped traffic around the scene.