OBSERVER Photo by Mary Heyl Members of the Gowanda Mural Project are currently working on a second mural under the Aldrich Street Bridge.

OBSERVER Photo by Mary Heyl The first official creation of the Gowanda Mural Project was recently completed on the side of Alison’s, a salon located on Main Street in Gowanda.

OBSERVER Photo by Mary Heyl The idea for the Gowanda Mural Project began last year with Francine, the steelhead trout that members of the Gowanda Community Clean-Up group painted under the Aldrich Street Bridge to cover up the graffiti. 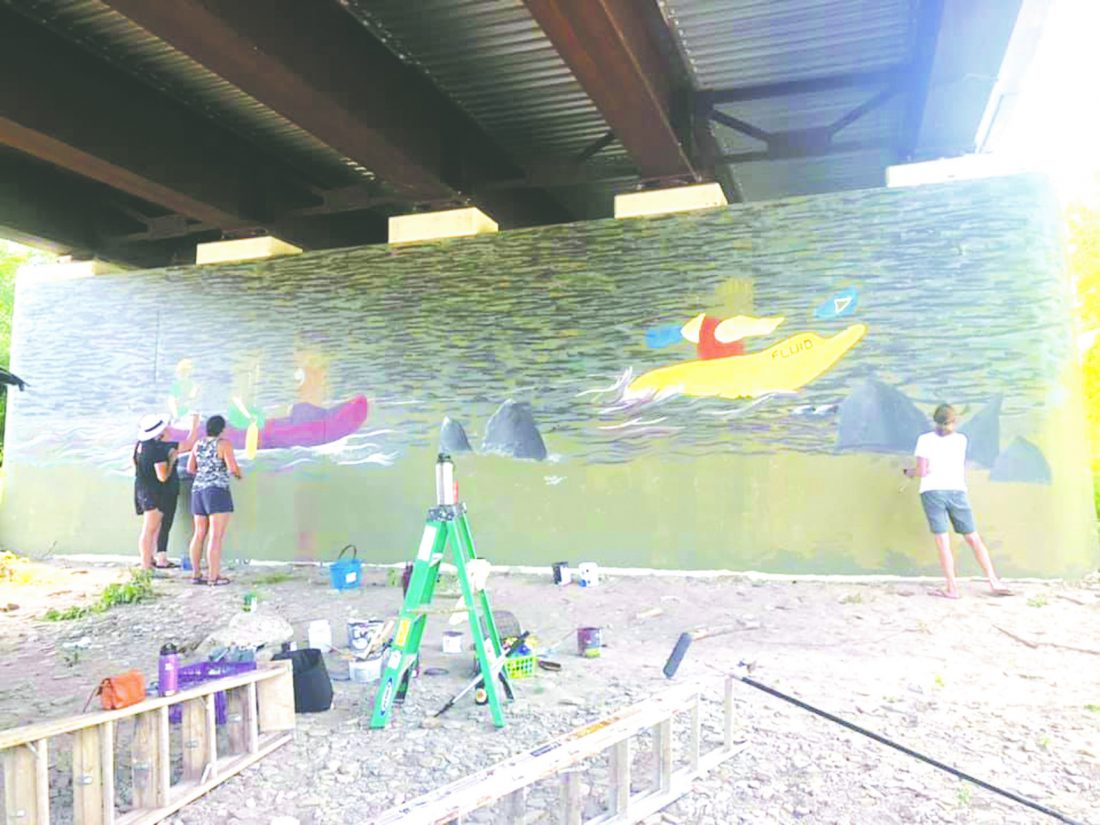 OBSERVER Photo by Mary Heyl Members of the Gowanda Mural Project are currently working on a second mural under the Aldrich Street Bridge.

GOWANDA — How can one complaint posted on Facebook become the catalyst for a community-wide effort for beautification and creativity?

Just ask Gowanda residents Heather Rydzik and Krissy Bartholomew Smith, who formed the Gowanda Mural Project to beautify the village one mural at a time.

Smith told the OBSERVER that last year, someone posted a complaint on Facebook about the appearance of the village of Gowanda.

In response to the complaint, Amy Jaroszynski formed the Gowanda Community Clean Up Group, which included more than 100 volunteers who worked to clean up the village. One of the first projects involved the graffiti under the Aldrich Street Bridge. 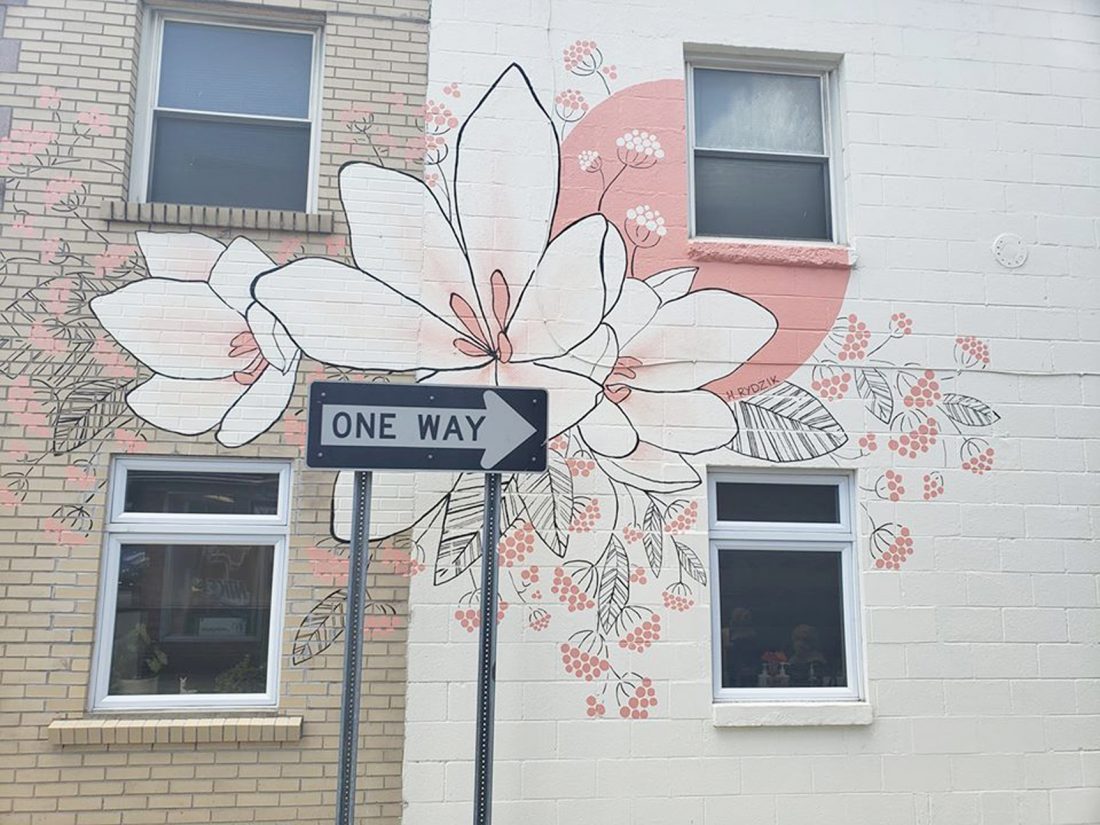 OBSERVER Photo by Mary Heyl The first official creation of the Gowanda Mural Project was recently completed on the side of Alison's, a salon located on Main Street in Gowanda.

“I’ve traveled to lots of places in California, Toronto and even Buffalo that have beautiful murals, so I thought, ‘Let’s paint a mural!'” said Smith.

Under the bridge, she and others painted a large steelhead trout named Francine. Smith admits that she is not a professional artist, but that creating Francine was a fun project that honors the heritage of the village.

“Diane Dye and Heather Rydzik (Gowanda High School art teacher) came down to help us make Francine a beautiful fish,” Smith laughed. Gowanda resident Marya Hoffman will soon be finishing the mural by painting the Seneca word for steelhead trout beneath the painting.

After becoming involved with the Francine project, Rydzik became inspired to continue painting murals throughout Gowanda and formed the Gowanda Mural Project. Rydzik’s first official mural as part of the project is Whimsy on North Water, a beautiful flower painted on the side of Alison Utley Connolly’s salon at 5 W. Main St. in the village. From start to finish, the mural took 11 days. Rydzik spoke with the OBSERVER shortly after putting the finishing touches on the mural.

“Last year, I was sitting at the red light, and I just looked at the building and noticed that the front half was brick and the back was all white,” Rydzik recalled. “It seemed like the perfect place to start in-town murals!” 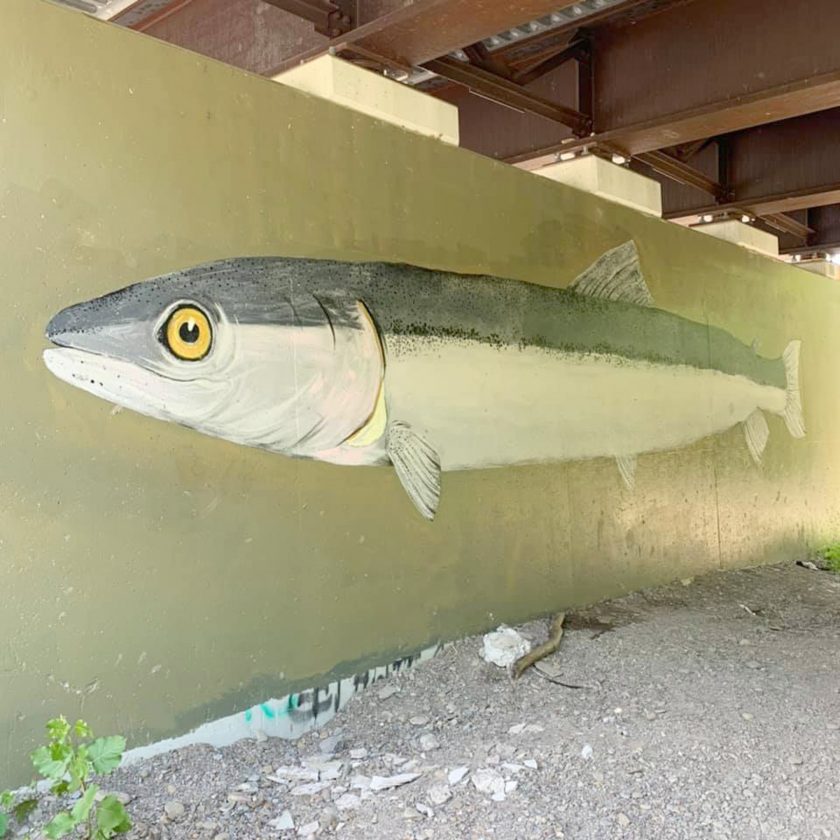 OBSERVER Photo by Mary Heyl The idea for the Gowanda Mural Project began last year with Francine, the steelhead trout that members of the Gowanda Community Clean-Up group painted under the Aldrich Street Bridge to cover up the graffiti.

Rydzik’s goal was to create a visual transition from the white area of the building to the brick by painting white flowers with coral accents across the two surfaces. She began by taking a photo of the building and sketching her idea, which she presented to owner Connolly.

“She was 100% on board,” Rydzik said. “I started it two days after we finished school.”

Whimsy on North Water is Rydzik’s first exterior mural, though she has completed eight murals inside the high school complex.

“The concept is basically the same, except for the height and the exterior surface,” she explained. “I’m actually very afraid of heights, but painting has made it not so scary.”

In order to simplify the first project and keep costs low, Rydzik designed and painted the mural with just three colors. The majority of the paint was donated by McCormack’s Hardware at 21 W. Main St. in Gowanda, and Rydzik used her own painting supplies and ladders to complete the project.

Now, the group is working on another mural below the Aldrich Street Bridge. This mural features the nearby river, kayaks and canoes to celebrate yet another unique feature of the village. Rydzik created the public Facebook group Gowanda Mural Project to show photos of the murals in progress, as well as to provide a public forum for the community to share their ideas. Rydzik has posted questions involving what types of wildlife residents would like to see.

“I think people want to be involved at various levels, even if it’s just staying in the know and sharing ideas,” she said. “We’ll be featuring a hummingbird, as that was the number one bird people wanted.”

Rydzik acknowledged that keeping the project sustainable is important, as each mural takes many hours of painting and lots of supplies. Those who are interested in donating their time or materials can message the group on Facebook. Even those who don’t consider themselves artists are welcome to join in the fun and help paint the next mural, which is planned for the side of Honk’s Grape & Grain liquor store at 76 Jamestown St.

Rydzik said, “We’re planning to host community come-down-and-help-paint events. It will be ground-level work, and we’ll work on it in stages so that more can help, even if they don’t feel they have the experience or skill. Come on down and paint the base coat!”

Both Rydzik and Smith commented on the positive feedback they’ve received from passersby. “It’s been really great having people just stop by and say how much it brightens up the community,” Rydzik said. “These murals show that Gowanda is already saying nice things about itself.”