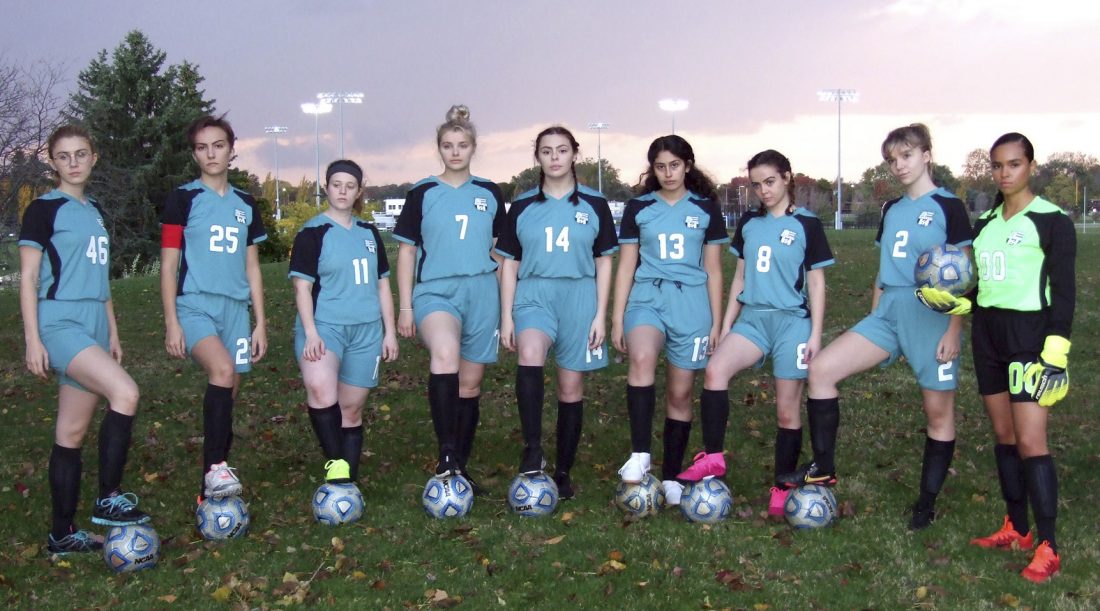 The 2019-20 Walter Gloor Mainstage Series at the State University of New York at Fredonia continues in December with a work that was a finalist for the 2017 Pulitzer Prize in Drama.

The Department of Theatre and Dance presents six performances of Sarah DeLappe’s “The Wolves” from Dec. 5 to 8 in Bartlett Theatre on the Fredonia campus.

The play, which made its off-Broadway debut in 2016, follows the members of a girls indoor soccer team as they “navigate big questions and wage tiny battles with all the vim and vigor of a pack of adolescent warriors.”

Director Jessica Hillman-McCord, a member of the Theatre and Dance faculty, said “The Wolves” is a very contemporary work that is relevant to current events.

“I think young women are experiencing a major cultural shift right now in terms of power and ownership,” she said. “It’s an important play for the times we are in.”

With mature language and situations, the director said “The Wolves” is a work to which older teens and adults will be able to relate.

“The play deals with a segment of the population that doesn’t always get a lot of attention, outside of some cliches and stereotypes,” Hillman-McCord said. “It’s a three-dimensional portrait of 16 and 17 year-old girls that we basically don’t ever see.”

In a review of the play, the Village Voice described “The Wolves” as a “delightful meditation on society, sex, and soccer. DeLappe’s dialogue is hilarious and idiosyncratic. She offers us 90 minutes in a smart, sympathetic, female world.”

Hillman-McCord explained “The Wolves” makes use of overlapping dialogue, which may be a new experience for some audience members.

“You won’t hear every word — but you’re not expected to hear every word,” she said. “It’s a different perspective on how to be a spectator in a theater. You could see the play multiple times and hear something different each time.”

Still, Hillman-McCord said the story is easy to follow.

“It’s very clear what is going on when you are watching,” she said.

What this technique does is allow the audience to have the feeling of being dropped in as observers in the world of the characters.

“The audience is immersed in the world of these girls,” Hillman-McCord said. “It’s a window into a world that adults may be closed out of.”

“The Wolves” is presented as part of the 2019-20 Lake Shore Savings Season.