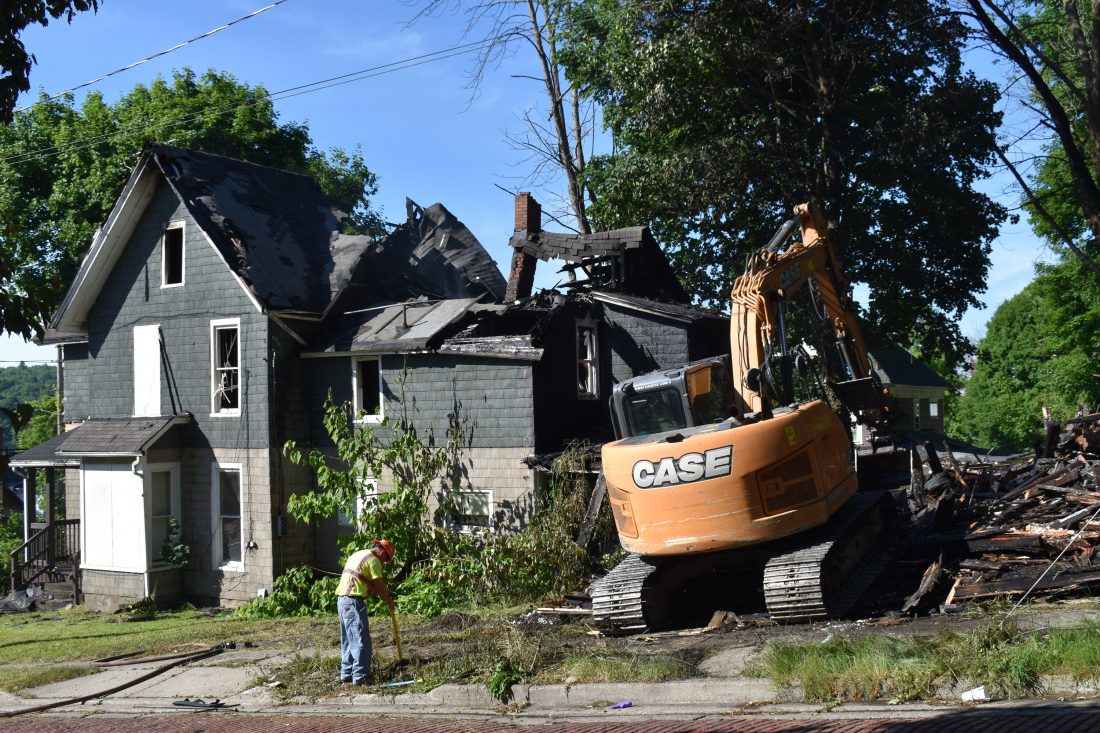 Photo by Eric Tichy Two properties in Jamestown were destroyed and another was damaged in a fire reported around 2 a.m. Wednesday in the area of Thayer and East Second streets. No injuries were reported in the fires.

Two properties were destroyed and another was damaged after a large fire broke out early Wednesday in Jamestown.

The fire was first reported at 31 Thayer St. shortly after 2 a.m. and later ruled arson following an investigation. The Jamestown Police Department said it is looking for information after a person was spotted on surveillance video approaching the residence around 1:50 a.m. That same person was then seen running away from the property around 1:54 a.m.

A 10-second video of the unidentified person was released by Jamestown police.

All three properties were vacant at the time of the fire. No injuries were reported.

Sigular said firefighters were able to gain entry into 35 Thayer St. and prevented the fire from spreading to the rest of the home. However, on East Second Street, the fire quickly got into the attic, making firefighting efforts difficult.

To help battle the three fires, 15 off-duty city firefighters were called; Falconer was called to stand by at City Hall.

The fires were ruled under control by about 5:30 a.m. “The crews did a great job to mitigate the scene,” Sigular said.

By late morning, the 31 Thayer St. and 87 E. Second St. structures — both of which sustained massive damage — were demolished due to safety concerns. The second Thayer Street property is likely salvageable, Sigular said.

City fire investigators were summoned to the scene. In a news release, Jamestown police said they are looking for any information that may lead to the identification of the person seen on surveillance video

Information regarding the person or fire can be sent to the department at 483-7537, through the tip line at 483-TIPS (8477) or through the Tips 411 App. All calls and tips are kept confidential.

Domestic dispute leads to charges in Jamestown JAMESTOWN —A city man has been arrested in connection with a ...

Chautauqua County Sheriff WESTFIELD — A Ripley resident has been charged in a burglary on June 22. Michael S ...

One person killed in Route 5 crash EVANS — One person has died in a motor vehicle accident on Lake Street ...

Dunkirk Police Department ¯ On June 3, Andrew T. Seelbinder, 32 was charged with possession of a hypodermic ...