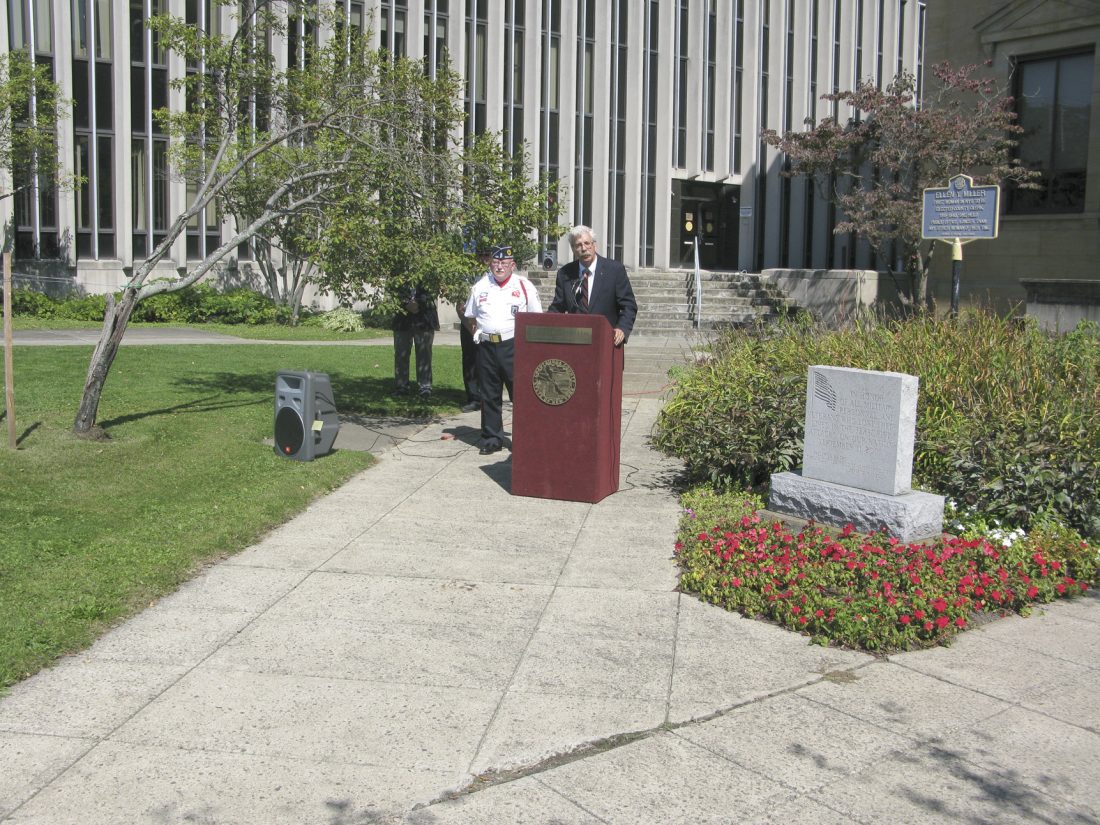 MAYVILLE — It has been 18 years since the Sept. 11, 2001, terrorist attacks, and America continues to remember the lives lost on that day.

The Local American Legion and Chautauqua County Veterans Council held a 9/11 remembrance ceremony in front of the Chautauqua County Courthouse on North Erie Street in Mayville. The ceremony took place next to the memorial that was dedicated in 2003 to the people who lost their lives in the attacks. Local dignitaries spoke during the ceremony, and it concluded with the three-volley salute and the playing of “Taps.”

“Let us reflect on the spirit of that day,” said Chaplain Stan Kroski, who opened the ceremony. “When we were resolved in the fact that we are all Americans working together. Indeed, what makes us Americans is not where we come from, but what we believe in and what we embrace.”

Chautauqua County Executive George Borrello and State Assemblyman Andy Goodell shared their experiences of 9/11, spreading messages of hope to the people who came to the ceremony.

“Like many of you, I know exactly where I was on that day,” Borrello said. “On that day, we were united. But now we live in a society that worries more about offending someone than doing the right thing. We must all remember what happened on that day and share it with our children.”

Goodell said that 9/11 was different from previous attacks on America because unlike 1812 or Pearl Harbor, the 9/11 attacks were not a military attack, but involved innocent civilians. He said it was an attack on what America stands for – namely, freedom.

“I’ll never forget the moment the second plane hit,” said Sue Rowley, who represented the Senate and the Blue Star Mothers. “We watched as the second plane deliberately flew into the tower, and just like that, our world was changed. We watched as so many brave police, firefighters, EMTs and all of our first responders ran into those towers to save as many people as possible, all risking their own lives.”

Rowley said some of the heroes who needed to be honored were the passengers of Flight 93, who realized what was happening and acted heroically to stop the plane, sacrificing their own lives.

“The sense of patriotism was strong and comforting,” Rowley said. “People were standing in long lines to donate blood (the months after the attack). Churches were filled to capacity. In the months that followed, we were one nation … working side-by-side making sure there was liberty and justice for all.”

Soldiers are still stationed in Iraq and Afghanistan, fighting the war so that it doesn’t come back to America, Rowley said. She said that many people believe the war has ended because no one talks about it anymore.

“The date 9/12 is often remembered along with 9/11 because of what happened after,” said Katrina Fuller, who was representing U.S. Rep. Tom Reed, R-Corning. “On 9/12, we were all Americans, not divided by our differences, but drawn together by our love of our country and fellow man. We cannot forget that we are still those people who banded together in love.”

Consultant to get input on Dunkirk Senior Center renovations

The City of Dunkirk and Chautauqua County Office for the Aging, through a grant from the Health Foundation for ...

Recently Anderson-Lee Library held its annual Valentine’s Craftapalooza. This event is held prior to ...

A series of public hearings are scheduled to solicit community input for the City of Dunkirk’s Community ...

Area high school students can put their artistic talents to use by participating in a contest to design the logo ...

GOWANDA – Gowanda High School has released its high honor, honor and merit rolls for the second quarter of the ...