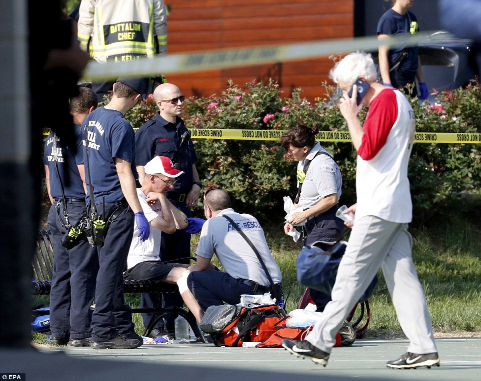 More than 20 years ago, Jamestown native Tim Johnson was roped into organizing the Republican Party’s team for the annual Congressional Baseball Game.

Little did he know Wednesday morning he’d find himself facedown in a dugout, evading a volley of bullets that would shatter a tradition better known for its friendly, bipartisan spirit than anything else.

“I’m standing on the field on the first base side … and all of a sudden, we hear a loud pop,” Johnson told the OBSERVER on Wednesday. “We all wondered if it was a firecracker, but after a short silence, several more shots came. That’s when we made the very quick conclusion that we were under attack.”

Johnson and a number of congressmen and staff huddled into the recessed dugout, laying low to avoid the gunfire apparently coming from the third base end of the field.

Despite the cover, Johnson said he was full of uncertainty.

“A number of things go through your head … like who’s shooting, how many shooters are there and are they getting close to us,” Johnson said. “When you’re in that situation, a second is like a minute and a minute feels like a half-hour.”

Indeed, it wasn’t supposed to be this way.

For years, Johnson, a 1978 Jamestown High School graduate, had been chief staff organizer for the GOP’s congressional baseball team, a gig he scored after entering a Congressional Fellowship program — in his case, for aspiring journalists — in 1994.

As luck would have it, he chose to work with the now-late Ohio Sen. Mike Oxley, who just happened to be a player and soon-to-be manager of the Republican congressional baseball team.

“This all started because I picked a member of Congress who was a big sports fan and enthusiastic baseball player and who told me ‘Well, you’re helping me run this thing as long as I’m manager,'” Johnson said.

Scheduling practices and hauling equipment was normal for Johnson, as well as fundraising. Over the past 20 years, the Congressional Baseball Game has seen its fundraising efforts grow from $25,000 to $30,000 a year to more than $600,000 for local charities.

Today, Johnson is no longer chief staff organizer, but remains a helping hand at practices — which is where he was Wednesday morning.

“This is about the most innocent thing you can be doing — playing baseball early in the morning,” Johnson said. “This is one of the great true bipartisan events on Capital Hill … and to have it singled out by an individual as a reason to create violence, it just leaves a lot of people scratching their heads.”

The gunman, 66-year-old James T. Hodgkinson from Belleville, Illinois, was reportedly shot by police during the incident. He later died of his injuries. Three people, along with House Majority Whip Steve Scalise of Louisiana, were reported injured.

Johnson said he did not see the shooter or Scalise.

Aside from a scraped knee that he sustained while scurrying into the dugout, Johnson came out unscathed — thanks in large part, he said, to the Capitol Police and Alexandria police who assisted at the scene.

“They saved many lives, including probably my own,” Johnson said. “I consider myself highly fortunate.”

The Congressional Baseball Game is reportedly still on for today at 7 p.m. in Nationals Park in Washington, D.C.