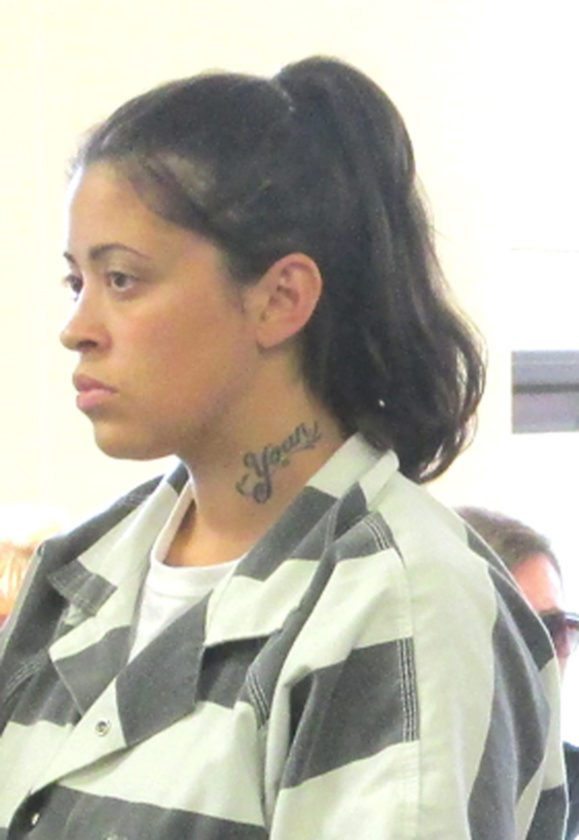 MAYVILLE — The 12 jurors will begin deliberations this morning to decide the fate of Rebecca Ruiz, who allegedly shot and killed Julian Duman on July 6, 2017.

The four charges the jury must to decide on are: second-degree murder, or a lesser charge of second-degree manslaughter (cannot be guilty of both), second-degree criminal possession of a weapon and tampering with evidence.

During closing statements, the defense requested the jury to see Ruiz as a mother protecting her home and children as the prosecution suggested Ruiz shot the middle of the door with intentions to kill.

Speaking for the defense, Pendergrass began his closing statements with the emphasis on home safety.

“Last night, I was sitting in a hotel room … reflecting what to say (for the closing statement),” Pendergrass began. “… Something kept reverberating in my mind.”

The defense attorney alluded back to March 5, 2017, when Ruiz called 911 due to an intruder. The intruder was later confirmed to be Walter “Waldo” Duprey. In the recording of the call, noticeable knocking was heard, and Ruiz ran upstairs, she said, to avoid Duprey. She alleged that Duprey followed her and beat her up and that her 13-year-old son told him to stop, which he did.

Police arrived and told Duprey to leave as he stood in the front yard; Ruiz did not file charges in fear of instigating Duprey to be angrier at a later time.

Pendergrass stressed that Ruiz was traumatized, in a sense, that someone surpassed her locked door and entered the home. Ruiz, from March 2017 to July 4, had only more built up angst as a supposed shooting occurred under the mask of the fireworks on South Roberts Road.

He aligned that the encompassing fear reached apex on the night of the shooting, July 6, 2017.

“Many of you didn’t have to worry about getting your brains beat out,” Pendergrass said, hinting towards the beating on March 5.

The defense attorney added that the defendant was put against a rock and a hard place as the alleged “Waldo” was attempting to break into the home again. Duprey was the alleged knocker as he said his other nickname Spoons when the knocker said, “It’s Spoons, (expletive). Open the door.”

Ruiz scrambled to find a weapon for defense. Pendergrass said, “She took the smaller gun,” which was not said during the testimonies or in the evidence.

At three different times during Pendergrass’ hour-long summation, he lifted the evidence door — that sat in the court — punched it to reenact the situation. Though much of his closing statement was repetitive, he echoed congruent mentalities of Ruiz being pushed emotionally to pull the trigger.

In one part, he elaborated with hand motions that Ruiz was between a rock (death) and a hard place (jail). In another allusion, Pendergrass hinted that Ruiz was a mother defending her children, then said, “(She) did not want to see her children see her die.”

Pendergrass set the scene and utilized his ability to tell a story. He adjusted his voice from going deeper in tone and slower in pace during transition parts of the story to near yelling and upbeat when he wanted his point to be heard and remembered; Pendergrass had long pauses, then once it became noticeable, he continued his monologue. His mobility with his words and actions kept eyes open and attentive.

In contrast from the flamboyant Pendergrass, District Attorney Patrick Swanson brought out the television and put up the prosecution’s slideshow presentation.

“Becky, you shot me,” it read on the first slide.

Swanson, who led the prosecution, used the defendant’s words against her when she took the stand. Ruiz heard those words from the victim after going outside and approaching Duman.

Swanson utilized the slideshow to correlate the charges against Ruiz and how she should be convicted of them. He stated what would make one guilty of said murder charge and other applied charges, then argued how it coincided with the story.

The DA entailed that this was stated at the four-minute mark of the call, while he replayed it. That was his argument to the intent needed in a second-degree murder conviction.

Pendergrass was more defiant against Swanson’s summation as he was active in calling objections. This created a pause-and-play pace for Swanson as the counsels met with the judge.

Swanson continued to pin the charges to Ruiz as he described the tampering with evidence charge. Swanson replayed another part of the July 6 911 call to suggest tampering.

“Please get this out of here,” Swanson transcribed what Ruiz claimed to say. “… Please take this, I can’t go to jail.”

The audio was not clear to confirm the entire quote.

Swanson was more aggressive and conversational with the jury as the closing statements continued. The DA questioned the jury on the defense’s closing statement. Swanson asked the jury to ponder whether the tension was as high as Pendergrass wants them to believe. There were no confrontations between March 5 and July 6.

Also, the DA added that Ruiz never told police on scene that she was scared of the person trying to enter on the night of the shooting. She told police in her statement that someone jiggled the key in the door and that she thought it was Waldo, but not that there was knocking and a hostile situation.

Swanson, who hinted towards this when Ruiz was on trial, said that the defendant listened to the entire case in front of her. She knew of her disadvantages and knew the story that the defense wanted to tell, Swanson said.

“It wasn’t a reasonable person, who was in fear for her life,” Swanson said. “It was anger” that helped her pull the trigger.

There were a few statements that were stated and not corrected to the jury during the closing statements. Pendergrass, whose opening statement was halted by the prevention of Quentin Watts’ testimony, made comments that were not evidence to keep parts of his story together.

Without Watts’ case, the story on Watts, Duman and Angel Morales “suited up” to kill Duprey at a South Roberts Road was not stated. Yet, during the defense’s summation, Pendergrass stated it without objection. The “sick joke,” as Pendergrass called it on Thursday, was not proven as Watts was the only one privy to such information.

The same goes with the March 5 attack from Duprey.

It was noted from both Ruiz and Dunkirk Police Detective Scott Korzenski that Duprey was at the residence on March 5. Dunkirk police officers spoke to Ruiz, not Korzenski, and Ruiz admitted she didn’t apply charges. However, there was no proof — via photos or from Korzenski’s testimony — that Ruiz was beaten, other than her testimony alone.

Lastly, the July 4 shootout between Duman and Duprey was hearsay at first by presiding Judge David Foley. Foley allowed it later as it was needed to allow Ruiz to continue her story. During the Dunkirk Police investigations where officers and detectives took the stand, none of them stated they heard or were asked to inspect such shooting.

Pendergrass utilized the shoot out to say the stress was at its climax, just two days before the murder.

The jury will arrive at Chautauqua County Court today at 9:30 a.m. and immediately go into deliberations. If not decided, the deliberations will continue on Tuesday as court is off Mondays.

Follow the OBSERVER on Twitter with the handle @TheObserverNY and @ByKuczkowski to see up to the minute updates on the trial as well as our website, observertoday.com, for breaking news on the jury’s decision.