In Shakespeare and life, Mac a class act 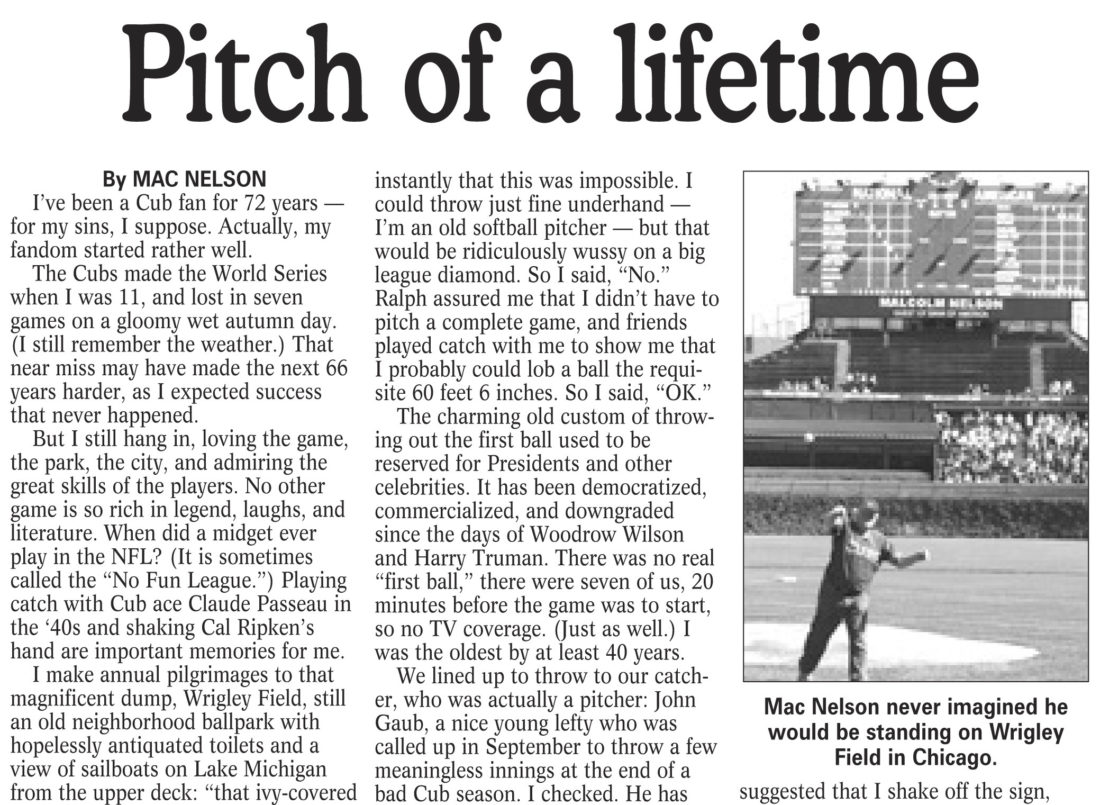 From the OBSERVER files Mac Nelson’s last submission to the OBSERVER — from July 27, 2014 — was about his special day at Wrigley Field.

On a summer day back in 2008, I became reacquainted with Mac Nelson, English professor emeritus at the State University of New York at Fredonia. We both arrived at the Shorewood Country Club parking lot in anticipation of a Rotary Club meeting where he was going to speak about his book “Twenty West: The Great Road Across America.”

His presentation that Tuesday afternoon was a trip down memory lane — not only for the famous stretch of road, which goes through Chautauqua County, but just to hear him speak again.

That unmistakeable voice. It was booming, filled with passion and energy, especially when Mac was talking about the topics he loved. Thousands of State University of New York at Fredonia graduates, including myself, can relate to those moments in his classes in Fenton Hall that always kept you captivated regarding the plays and life of William Shakespeare.

You were not an English major at Fredonia State if you did not take one of Mac’s classes.

So it was fitting, on the evening on July 17, I happened to see Mac at the opening night of “Twelfth Night,” during the second Shakespeare on the Lake on the Dunkirk Lighthouse grounds. He was enthusiastic about the event — and featured in the credits of the evening’s program as having a role in making the event happen.

Less that two weeks later, Mac sent me an e-mail after I wrote a column about the potential lure of Dunkirk-Fredonia for seniors due to its proximity to Lake Erie and our affordable way of life. He admired my attitude, but had some reservations.

“In short, I think you are fighting a losing battle against warmth and sunshine,” he wrote in an email on July 27. “At least until the southern states become a) uninhabitable from crowding, or b) underwater, which will indeed happen. So what the hell, fight on.”

Dr. Malcolm Nelson died unexpectedly on Christmas Day. We published his obituary on Sunday. In it, a former colleague correctly noted Nelson “was a force of nature, a man who lived life to the fullest and with great gusto.”

He was a highly respected professor and SUNY Fredonia chapter leader of the United University Professions union. In addition, he loved to travel.

Portions of his book “Twenty West” were featured for weeks in this newspaper — on our Opinion and Travel pages — and often highlighted one of his favorite stops. “I have always loved the American West, especially Yellowstone National Park, the world’s first and greatest national park,” he wrote on July 6, 2008. “I have visited it so many times that I have lost count, from 1955 to the present. In that half century it has changed little, and mostly for the better; gray wolves are back, and the bear count is up. I have changed, too, and not all for the better. The one thing I had never done is to get deep into the backcountry, into the wilderness, for several day to see the sights and hear the silence. In my 70th year, I decided to set this right, and I did.”

He also was a huge fan of the Chicago Cubs, which finally gave him the great joy of a World Series championship in 2016. In the last piece he wrote to the OBSERVER, he mentioned a visit to Wrigley Field that coincided with a high school reunion. A couple of his friends from the Windy City were able to give Mac an unforgettable moment of making a pitch from the historic mound.

“When it was my turn — I was the first relief pitcher — I jogged out onto the sacred turf, seeing my name on the famous scoreboard. I felt surprisingly calm, though I was standing where I had watched Warren Spahn and Bob Gibson stand,” Nelson wrote in July 2014. “I wasn’t worried about the thousands of people watching; I just wanted to get the ball to the plate. I cheated a little — I stood in front of the mound — and threw.

“Well, no, but at least nobody booed. (I think if I had been in New York City that might have been different; Wrigley crowds are famously warm and supportive.) The ball got to my catcher, and I waved my cap to mild applause and left the field.”

Mac touched many — in our community and in his classroom. That’s a winning legacy worth celebrating.