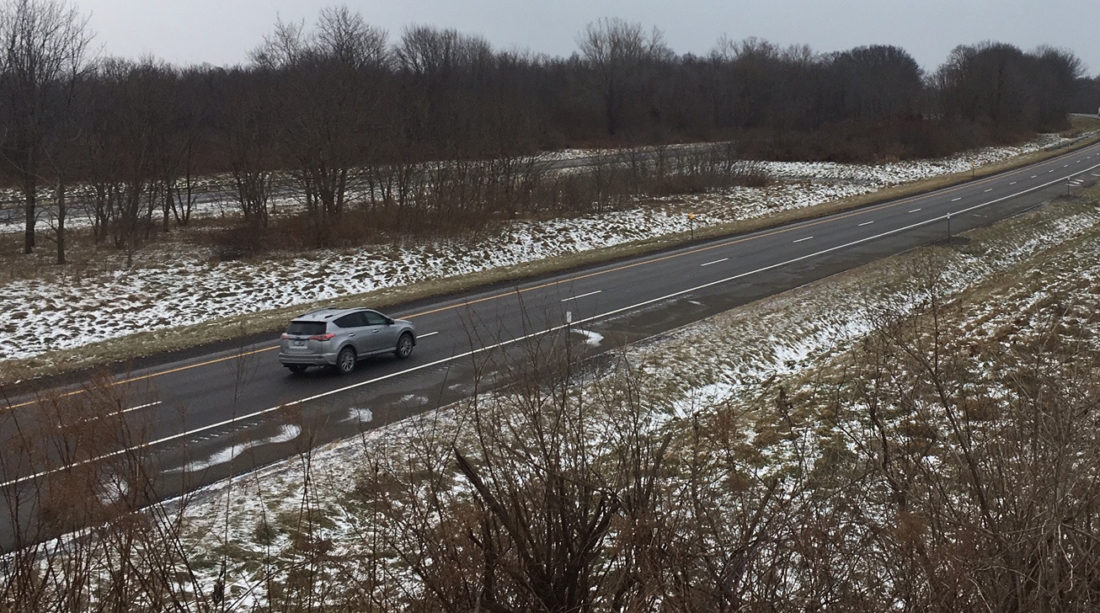 OBSERVER Photo Motorists heading westbound out of New York state will be greeted with a Welcome Center in Pennsylvania on Interstate 90.

Heading westbound on Interstate 90 and exiting New York state, it is not long until travelers are greeted by a Welcome Center. It highlights what the commonwealth of Pennsylvania has to offer, specifically along Lake Erie’s grape country.

Travelers coming from the east, entering Chautauqua County and the Empire State, do not receive anything close to the same kind of pleasantry. After passing Exit 61 at Ripley, where the only visible sign is for an adult store, motorists come upon something even worse: a toll barrier.

Welcome to New York, the land of taxes and fees.

We all know our officials can send a better message, those in Albany — who should see this as a priority — are more focused on Buffalo and Niagara Falls. That is certainly acceptable, but another 65 to 80 minutes away from the border.

Last summer, a welcome center was opened by the state Thruway Authority in Grand Island. It is not in a place that is convenient to many of the travelers.

In other words, you have to go out of your way to get there.

After exiting the state Thruway — to Interstate 190 North, take Exit 19 and Whitehaven Road to drive to the center. So much for being accessible for those just passing through.

Earlier this week, Chautauqua County Executive George Borrello brought up an idea that has been floated for the past 20 years: how about a gateway center in Ripley? In this week’s Monday Morning Memo, Borrello told readers the center is a “priority.”

“When drivers travel eastbound along the I-90, Ripley is not only the first municipality they enter in Chautauqua County, but it is also the first municipality they come through when arriving in New York state,” he noted in his list of goals for 2019. “As such, it makes sense that this community would be a prime location for a gateway center that welcomes travelers, highlights everything Chautauqua County and New York state have to offer, and provides necessary information about local and regional tourist attractions. A feasibility study is underway to determine the best way for us to proceed with this project.”

Former Dunkirk businessman Lou Elias is pleased to hear about Borrello’s intentions, but wishes the current county executive had been around five years ago. As a member of the Northern Chautauqua Community Foundation Local Economic Development group, Elias spurred meetings and action regarding the Ripley center some six years ago.

“We did a lot of fact-finding … but we got no cooperation from the county,” he said.

Elias, who previously was owner of Jim’s Cleaners, said he still has his the research and Powerpoint presentation he put together in 2013 regarding a proposal for a Gateway. At that time, however, there seemed to be little momentum for county officials regarding the project.

That wasn’t due to a lack of interest from Elias’s group. In a number of meetings, representatives from the town of Ripley, Westfield, Portland as well as Andrew Nixon of the Chautauqua County Visitors Bureau were in attendance. Even Bill Daly, former county Industrial Development Agency director, attended some discussions. The overall sentiment, however, was if it was not on the state radar it was unlikely to happen.

Borrello’s attitude of making a center a reality could be a game-changer as far as Elias is concerned. “I have a lot of respect for George,” he said. “This doesn’t really surprise me. He sees what I saw … the importance of a Gateway.”

Elias, who winters in the south, says he would be interested in assisting the group or the study. “With full cooperation, things could move,”

That’s a much brighter and bolder vision for travelers heading east on Interstate 90 — and our region — than what is currently being offered or seen.

John D’Agostino is the publisher of the OBSERVER. Send comments to editorial@observertoday.com or call 366-3000, ext. 401.