No comedy in errors for city resolution 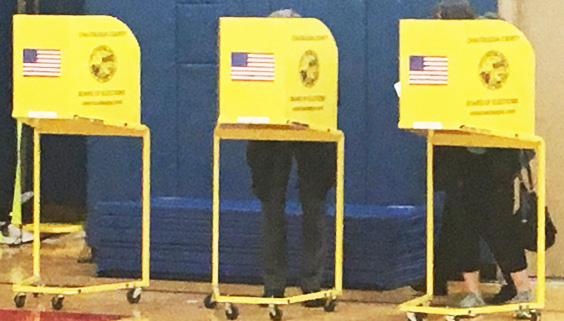 Early voting took place in Dunkirk, Lakewood and Mayville from Oct. 26 to Sunday.

For starters, let’s place the blame evenly when it comes to how Dunkirk Common Council and the county Board of Elections have handled a botched resolution on a referendum to increase terms of office in the city from two years to four. That guy on the left — yours truly — watched as the dominoes fell.

In endorsing the OBSERVER’s View for Oct. 28 that advocated for council terms to remain at two years, I thought we had our bases covered. Within the next two days, Democratic Board of Election Commissioner Norman P. Green was in touch to tell me that I had jumped the gun with the endorsement. There was a paperwork error that delayed the vote until 2019.

At that moment, I should have asked some questions. Instead — due to the fact the election was coming fast and furious — I let the issue go.

It was not much later that Dunkirk Councilman Shaun Heenan took the baton. At the final meeting of the year, he began asking aloud regarding how a resolution — passed in the spring to be voted on in November 2018 — could have been changed without council or public knowledge.

What residents got was a lot of excuses that sound as though something other than good government was taking place. Councilman Don Williams admitted, as co-sponsor of the resolution, he was in on the closed-door decision to change the date from 2018 to 2019 as did Green and city attorney Richard Morrisroe.

Who was really responsible for the error? We’re not sure, though the fault could be pinned on the current city Clerk Edwin Ramos based on Green’s letter to this newspaper last week. “The problem was that neither the staffers in the County Board of Elections office who monitor town, city and village referendums and election vacancies and the Dunkirk City Clerk never communicated on the referendum,” he wrote on Jan. 8.

So while the passing of the first date was done publicly, the revision — as noted in the OBSERVER’s View on Jan. 6 — happened in darkness. Council tried to make it look legitimate at the Jan. 3 meeting, approving the revision by a 4-1 vote.

Too late. City government failed at being accountable — and open — to its residents.

Something went wrong — and that is a cause for concern. What deserves even more scrutiny is the attempt to shove the change under the rug. No one, before Heenan, spoke out or wanted to say anything.

So who deserves the most blame?

Mayor Wilfred Rosas touts a transparent government. This action, even though it was by Common Council and the Board of Elections, was far from transparent. It was an illegal change that was spurred by a lack of attention to detail.

What makes it worse is council members are the ones who want the longer terms. This was something that was not brought to the governing body by residents, it was something pushed by those incumbents.

Rosas was on the sidelines for this debacle — and has not been a part of the resolution at all. But he could have been louder in criticizing how the matter was handled since he is the chief city administrator.

Ironically, one of the sponsors of the resolution in May admitted his mistake in attempting to put this referendum forward. “I’ve been getting a lot of calls and heard nothing good about the four years from what I’m hearing,” Second Ward Councilman Marty Bamonto said on May 15. “So I’m going with the people who called and voted for me in here.”

While voting “no” that evening — in a 3-2 vote, Bamonto voted yes to the resolution change Jan. 3.

For the record, the referendum for longer terms is a selfish move by a cocky council. Members, for all intents and purposes, are the only ones speaking publicly in favor of it.

This same group, in the past year, also approved a more than $23 million budget that ups spending 5 percent when compared to 2018. It also gave its blessing to a human resources official who sits back while collecting a paycheck and watches helplessly as the city spends more than $157,000 in overtime in July and August.

With two-year terms, you can point to these questionable actions. Four-year terms? Elected officials rely on voters’ short memories.