Paving the way for visits to our waters 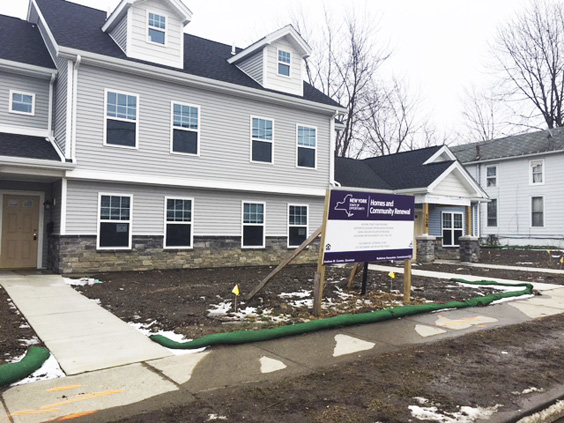 OBSERVER Photos Some of the new housing units along Main Street — one of the routes to the waterfront — are nearly complete.

What is the best way for motorists or tourists to arrive at Dunkirk’s waterfront? That question has been a focal point by leaders and consultants in the effort to build on the city’s reputation of being a summer destination.

Planners in recent years have held meetings and group sessions with community residents to get their input on the city’s needs, including a pair of sessions last summer. But during a meeting with representatives from Barton & Loguidice at the incubator in 2017, one of the items discussed was how to best feature the city from New York State Thruway Exit 59.

Less than 18 months ago, the preferred route was Central Avenue via Millard Fillmore Drive. Today, with a number of businesses exiting and the potential loss of the hospital, maybe a different direction would be more appealing.

While the charm of Central Avenue can be found in the residential area through Sixth Street, at least four “For sale” signs dot the area from Fifth Street to Lake Shore Drive.

To make matters worse, that portion of the business district seems far too quiet — even during prime business hours. It is not the best look for a city that wants to give the impression it is on the rebound.

Interestingly at that time, coming from Route 60 and Main Street had already been ruled out by the consultants due to a number of deteriorating properties and homes that proceed School 3. However, there is a new attitude that’s being built thanks to the efforts of the Southern Tier Environments for Living and New York state’s $16 million investment. Many of those 13 housing units are nearing completion — or have been finished.

“We want people moving in to want to stay and build a sense of community there,” said Tom Whitney, Southern Tier Environments for Living executive director, last summer. “We have had neighbors say that they want to have their house painted now, so hopefully, it will be an impetus for the whole neighborhood to show improvement.”

While efforts of Whitney and his agency are revitalizing that section of the city, maybe Dunkirk could use more recognition from the east and west. If bringing out-of-towners to the waterfront is the priority, then the solution could be in marketing Dunkirk at Exits 60 and 58. That brings the waters right to the tourists.

Now is the perfect time for area leaders — and the city — to contemplate this issue. Summer, believe it or not, is about three months away.

Along the Interstate 90 in New York state, the gem that is Lake Erie is practically hidden. There’s also no promotion of the waters from Batavia to Ripley other than a sign near Exit 48 that notes motorists are crossing into the Lake Erie Watershed.

Think of the potential economic boom from Westfield to Silver Creek if more motorists reach Dunkirk from Routes 5 and 20, not just Exit 59. Not only will it benefit a handful of communities, it also will help the growing wine and spirits industry in our county.

You could consider it a regional effort.

“This (waterfront) is where the biggest bang for your buck is going to be with public funding and private investment in the near term and when this starts to turn, a lot of the other stuff outside of this area is hopefully start happening as well in the city of Dunkirk,” said Keith Ewald, Keith Ewald, managing landscape architect at Barton & Loguidice in 2017. “The idea is we reprogram the roadway, reprogram the space to benefit public and private investment and have a better working waterfront. … It becomes a destination; you’ve only got the bones of that now.”

Music on the Pier, the boat races along with the summer festivals are just a small piece of what Dunkirk has already become. Upscale housing, especially near the waters and Lake Shore Drive, are all pieces of the future vision.

But everything begins with our Great Lake. Getting tourists off the Thruway — along Routes 5 and 20 — benefits us all.