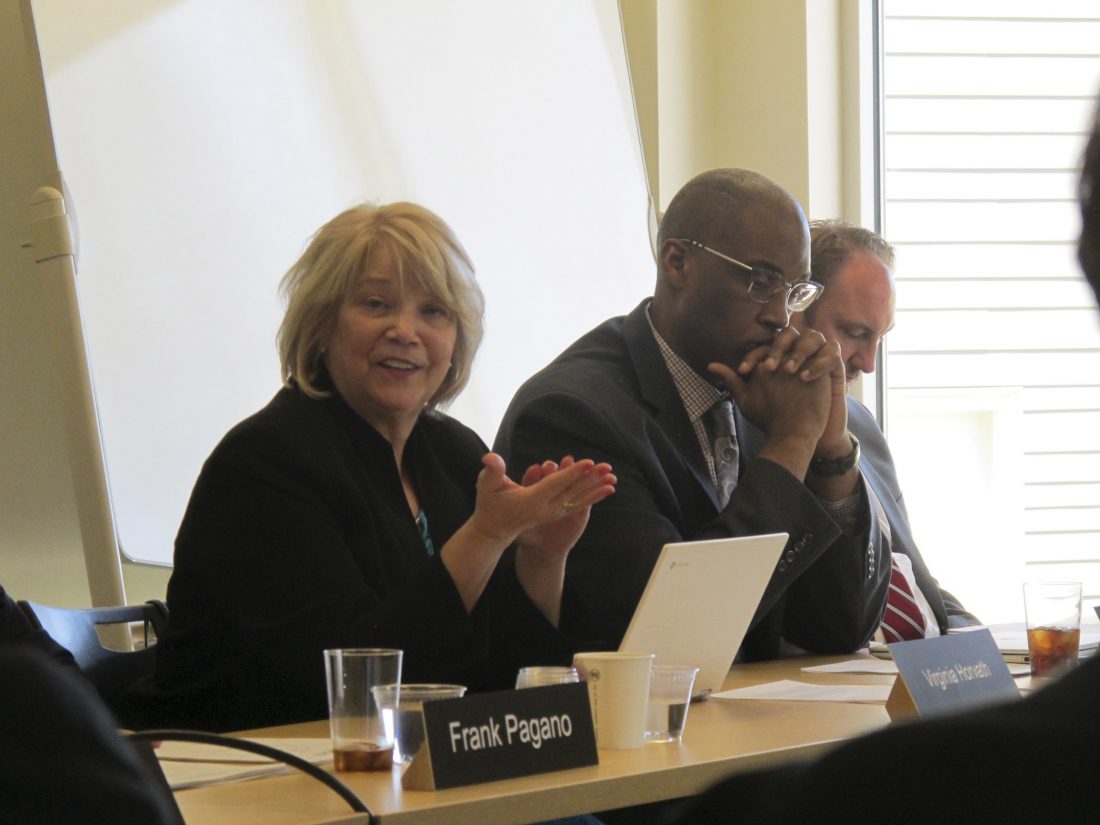 OBSERVER Photo by Mary Heyl. In her last college council meeting as SUNY Fredonia president, Virginia Horvath recognized and thanked members of the executive cabinet and college council for their hard work. Cedric Howard, pictured right, shared an update on admission numbers for the fall semester.

According to reports shared at the May meeting of the SUNY Fredonia College Council, the upcoming school year is off to a strong start, as applications and deposits have increased compared to previous years.

Dr. Cedric Howard, vice president for Student Affairs, was pleased to share that throughout the fall 2019 admissions cycle, SUNY reports that Fredonia has led the entire system as it relates to the percentage of application increases versus last year.

According to Howard, the group of students that has been accepted is an impressive one. Students hail from 1,119 different high schools and 92 colleges and were born in 44 different states and 82 different countries. Fifty-one students are either the valedictorian or salutatorian of their graduating class, and members of the group of accepted students are fluent in 59 languages other than English.

This group also includes 3,350 varsity athletes and 577 members of the National Honor Society. Accepted students include 1,841 who are involved in theater, 1,386 involved in dance, 1,725 who play an instrument and 1,665 who sing in a choir. Eighty-nine of these students have already performed in Carnegie Hall.

“And most impressive,” said Howard, “these accepted students have completed 509,000 hours of community service while in high school.”

As of May 7, the college has received 1,142 deposits, which is 72% of admissions’ overall goal. Howard said that this number is a slight increase from last year, and was also pleased to report that the number of returning students who have registered for the fall is up from last year, too.

“One of the things that we’re impressed with is that our housing will be close to 100% with all of our residence halls,” said Howard. “The University Townhouses have already reached 87% capacity, which is the first time in our history that we’ve been above 80%, and that’s not including the new transfer students and graduate students coming in this fall.”

SUNY Fredonia President Virginia Horvath was pleased to hear the positive news for the fall semester, and thanked Howard and many others for their hard work. Wednesday was Horvath’s last college council meeting before her retirement, effective July 1.

“A lot of my report, since it’s my last meeting here with you, is unabashed affection and appreciation for the members of our cabinet…I would like to publicly thank the members of this campus,” Horvath said.

“I just want to say all this publicly so that you recognize the work that happens here from each one of these people and their time, their love, their energy to making sure this place continues strongly,” Horvath said to council members.

She went on to share a message of affection with members of the college council. “Some of you have been here the whole time that I have been president,” Horvath said of her seven-year tenure. “Some of you have come on at different times. The work that we do would not occur without the support that we get from this council and from you, Frank (Pagano, college council chair). We could not have more dedicated people who give their time and come here because they care about the community and the campus. My final thanks are to all of you.”