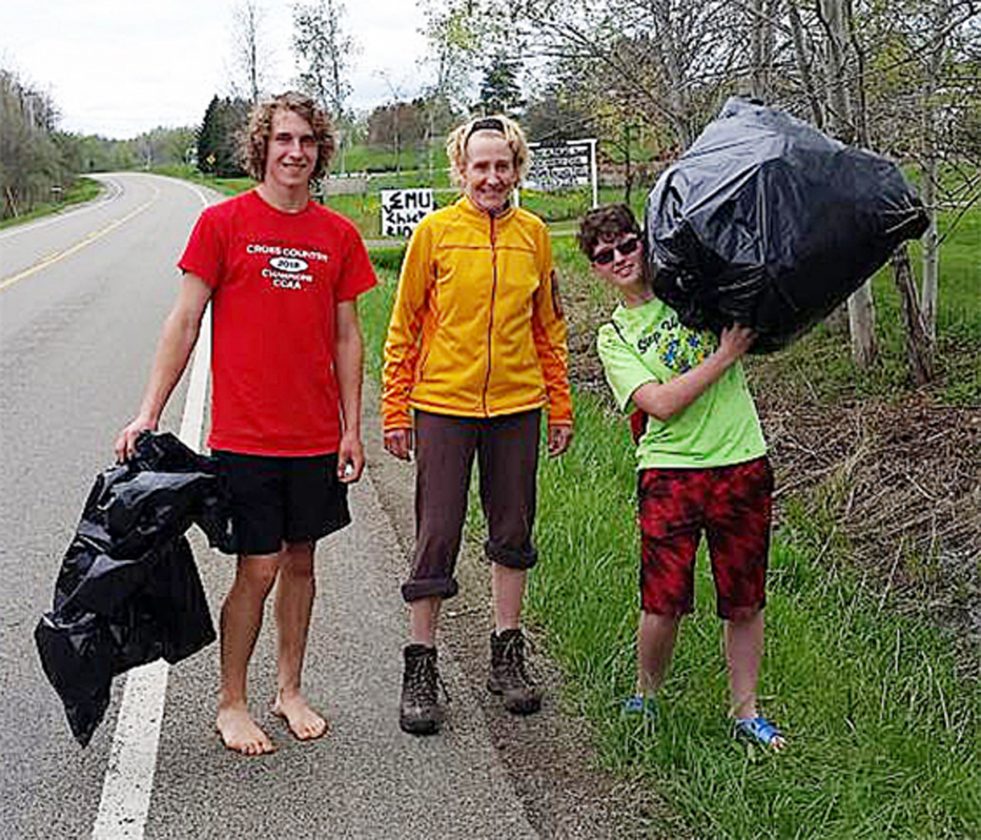 Pictured, from left: Collin Barmore, Cheryl Burns and RaeLe Lessinger pick up trash along a local roadside while recently plogging.

Inspired by other activist movements such as the Ice Bucket Challenge, this campaign centers around trash management and environmental cleanup.

Those participating are encouraged to take before-and-after photos of natural landscapes and public spaces that have been cleaned of litter. Often the after picture will feature people standing next to the bags of trash that have been collected.

Picking up the litter that lines public roadways is something that Cassadaga Valley teacher Cheryl Burns has been doing on her own for many years.

Burns, who is an educator on subjects like agricultural and environmental science and conservation, has always gone out of her way to clean up the roads near her home from plastic cups, cans and other human debris.

“I’ve been cleaning up our roadway for a long time,” Burns said. “I teach forestry and conservation and wildlife management, environmental science. I try and get the kids exposed to things they can do in their own backyard to improve the environment.”

Although she was not directly inspired by the trashtag movement, Burns habit of tidying up her street does resonate globally.

Today the activity of jogging or walking while cleaning things up along the way has a name — plogging.

The activity got its formal name and began to spread as an organized activity in the environmentally forward-thinking nation of Sweden around 2016 — with the name coming from the Swedish “plocka upp” or to pick up.

With increased concern about everyday littering and pollution, especially in the form of non-biodegradable plastic, the movement aims to help people stay physically active while also helping the environment.

Among those who have continued to promote the movement are American author David Sedaris.

Earlier this month, Burns had the idea of getting student athletes involved in plogging.

“I just came across this video and there was an article on (plogging). I thought that is kind of cool, there are people running around and picking up garbage. It’s nice to get people out there and get them moving and doing something good for the environment,” Burns said. “I know that these two kids are just so kind and they want to help were they can. When I threw it out there they were like ‘yeah, that sounds like fun.'”

There was one small problem that Burns, Barmore and Lessinger ran into on their journey. The route that they chose was so strewn with trash that the journey was more about picking up than it was jogging.

“If you are going to try it in this area it has to be on roadways that have been picked up before,” Burns said. “We started from the local golf course and right away we so overwhelmed with garbage we had to stop until we got to some other areas.”

In a world where people are becoming more and more concerned about pollution and environmental distress, there is often a feeling of hopelessness about what can be done.

The advice from Burns and the plogging movement is simple, just start small and pick up what you can carry.