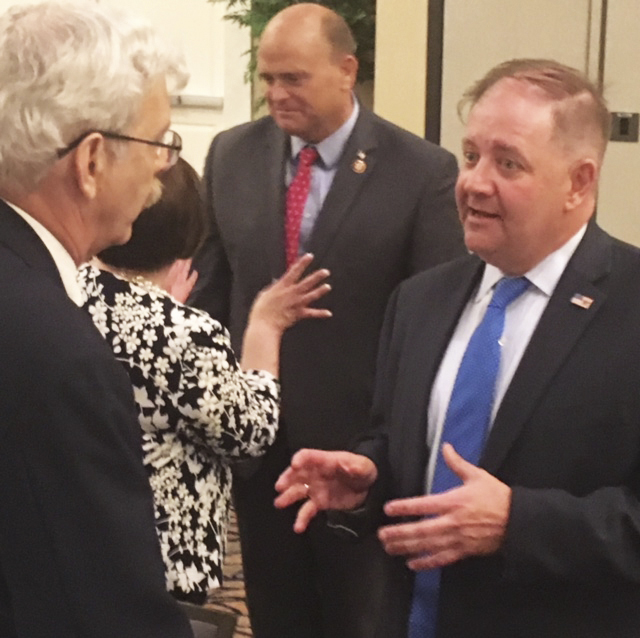 CELORON — It is a dramatically different political landscape when compared to the last presidential election. Democrats and Republicans in the summer of 2016 were struggling privately and publicly when it came to throwing support behind their party’s candidate.

Both Hillary Clinton and current President Donald Trump were seen as being full of flaws. There was a sense neither could be trusted so many Americans cast their vote for who they thought was the lesser of two evils.

Even those who leaned to the right in New York were unsure of what to think about the GOP’s leading candidate. “I was not a Donald Trump supporter,” said Shaun Marie, executive director of the state Conservative Party in June 2016. “Even now I cringe when I hear certain things not worth repeating. But he has won me over because I understand he does admire and love America — the pre-Obama America as much as each of you do.”

Marie’s comments on that evening of the Chautauqua County Conservative party annual dinner in Jamestown at that time were not a ringing endorsement for Trump. Instead, it seemed more of an acceptance that he had the greatest momentum to be the Republican candidate.

Today, for better or worse, Trump is very much in the driver’s seat when it comes to the 2020 election. Part of that is due to the Democrats trying to find their way with the next candidate while many Trump supporters believe he is accomplishing what he set out to do since his first day in the White House — Make America Great Again.

At last week’s Chautauqua County Conservative Party annual dinner in the Harbor Hotel, Robert Paduchik echoed that sentiment while speaking to more than 100 in attendance. As senior adviser for the Trump-Pence 2020 campaign he came across as more as a cheerleader than a strategist.

“I’m really proud to be a part of what the president has done in terms of reshaping the Republican party,” Paduchik said on June 6. “Just look at the things. You have a politician that’s elected to national office that keeps the promises he made on the campaign. Is anybody surprised by anything he’s done in the first 2 1/2 years?”

After a couple of seconds of silence, Paduchik noted the reduction of regulations, the cutting of taxes and the growing economy. But the president’s greatest accomplishment may be in the courts.

Almost going under the radar, Trump has made a major mark on the appellate level. That’s significant, Paduchik noted, because most federal decisions in the district courts are challenged 97 percent of the time at the next level. From there, only 7 percent of those cases make it to the Supreme Court.

Of the 179 federal appellate court judges, Trump has appointed 40 — or about 23 percent — of those jurists. “That is a tremendous reshaping of the judiciary in this country,” he said. “That is going to have an impact for a long, long time because what the Democrats and what the left do in this country is they use the courts. … They can’t pass legislation, so they try to litigate legislation.”

This year’s Conservative Party Dinner, organized by county Chairwoman Anna Wilcox, was not as diverse as past events when many Democrats were in attendance hoping to receive support on an additional ballot line. January changed all that when New York state’s election reforms and early voting law led to party leaders making decisions in late winter and early spring on what candidate to back.

That lack of political balance opened the door to criticism of a state that is being dominated by Democrats due to the left-leaning stronghold of downstate. “This governor (Andrew Cuomo) is just disconnected with reality and what’s important in this country,” Paduchik said, spotlighting Cuomo’s push for a tuition assistance effort for illegal immigrants over U.S. veterans. “I know that’s got to be depressing for you.”

Judging from recent election results, most of the Southern Tier has been at odds with state leadership. Republicans, however, are holding key positions in county governments and a number of local offices from here to Tioga County in the Congressional 23rd District, which receives its representation from Tom Reed. That’s a positive in Paduchik’s eyes.

“There is a lot of hope and opportunity here for the Conservative party … to win elections in New York,” he said. “It takes time. It takes effort and work, but it can happen.”