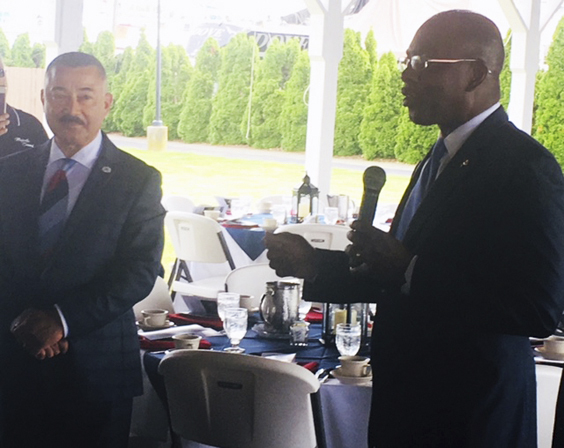 It is not often that Buffalo Mayor Byron Brown takes a back seat to an elected official in Western New York. Brown, who did that while making a stop in Dunkirk last week, has been at the helm of the second largest city in the state since 2006.

That year was definitely not the best of times for the Queen City. In fact, it may have been right when the municipality hit rock bottom.

During that year, politicians were reeling as Bass Pro backed out of a deal to build an anchor location at the former site of the Memorial Auditorium on the waterfront. Four years earlier, in 2002, the proposed Adelphia 20-story downtown tower became another pipe dream once the Rigas family was found to be embezzling funds, leading to the company’s bankruptcy and jail terms.

But Brown never panicked, leading quietly while being unquestionably in command. It is during his tenure that Buffalo has seen a revival of sorts. Some of the construction has come from the private investment of Terry and Kim Pegula while another chunk of the fortunes have come from the public coffers of Albany and state Gov. Andrew Cuomo.

Since 2012, Buffalo has received more than $2 billion in economic development funding from Cuomo and the state for its medical corridor and the impressive plant that was first known as Solar City. While the south-side Tesla facility looks impressive today on the outside, there have been well-documented worries on the inside regarding slow sales and company chairman Elon Musk.

State funds and added attention have been a source of the capital’s attempt to reinvest in an almost forgotten region. Dunkirk just happens to be a part of that economy — and it continues to have high hopes for the Athenex plant being built on the eastern border of the city. Nearly 900 jobs are expected to come from the pharmaceutical manufacturing facility — 450 in-house with another 450 spin-off positions tied to the development.

On June 19, during the Chautauqua County Democratic Committee banquet under the pavilion of the Clarion Hotel Marina & Conference Center in the city, Brown was on hand as the party and its leadership honored the achievements of Dunkirk Mayor Wilfred Rosas. “He has become a really good friend to me,” Brown said in endorsing the mayor’s re-election campaign. “He is someone who has become well respected all across the state of New York.”

That, of course, has not happened by accident. Rosas, since taking office in January 2016, has made it a priority to build relationships. It begins with the annual five- to six-hour ride to Albany for the State of the State address in January. It continues with constant trips to Buffalo, especially during major state or regional announcements.

In two counties that have a great deal of Republican representation, Rosas and Brown may be the most significant names in the region. Democrats, already in control of the Assembly, gained a stranglehold on New York state by winning the Senate in the 2018 elections. It has allowed the party to set a course that has very few obstacles in terms of push back on legislation that is not always friendly to blue-collar values.

Putting that aside, having Democrats leading two Western New York cities does have benefits. One of the most important is the partnership. Can anyone remember when Buffalo and Dunkirk — separated by only 50 miles — were working so closely in the past?

There’s so much already in common. It starts with the weather, the economy and manufacturing as well as some treasured traditions. But the greatest connection, undoubtedly, is Lake Erie.

Our neighbor to the north has plenty of momentum going with its projects by the lake. Here at Chadwick Bay, we still are in the early attempts of making a true splash.