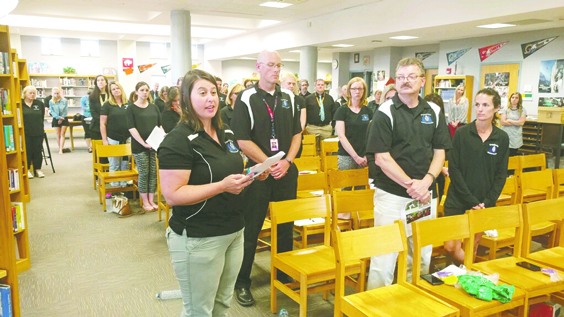 OBSERVER Photo by M.J. Stafford Fredonia Teachers Association President Michelle Greenough addresses the Board of Education meeting Tuesday as other teachers look on, standing in support.

Fredonia Teachers Association (FTA) President Michelle Greenough blasted what her organization views as a lack of communication with Fredonia school district administrators during Tuesday night’s Board of Education meeting.

The driving issue: a plan by BOCES to move to Fredonia, from Brocton, classes with special education students that BOCES feels can be integrated into the community.

With dozens of FTA members standing behind her, Greenough told the board that Fredonia campus staff first heard about plans for BOCES to rent space in mid-May.

“Right away our teachers began asking questions … but were met with an array of responses such as ‘I don’t know, it’s none of your business, and the problem is change; no one likes change,'” she said. “These examples of terrible communication have become normal and are resulting in confusion, rumors, distrust and low morale.”

She said that after Superintendent Jeff Sortisio met with the faculty about the plan, “we quickly realized that at least some of the students would likely begin to attend classes taught by Fredonia teachers. … Since then, as you can imagine, our questions have only become more numerous and pressing. Following a meeting with FTA officers, Mr. Sortisio attended an FTA meeting at our request, and listened again to our many concerns and questions. He made it clear that he has no intention of slowing or stopping the signing of this contract long enough to carefully plan for its success.”

Citing a lengthy list of questions, Greenough urged the board to delay a decision on the BOCES partnership until construction on the district’s capital project this summer is complete.

“We do not yet have answers to critical questions, nor do we even know all of the questions we need to ask. Mr. Sortisio told us yesterday that all of this can be sorted out over the summer months,” she said. “That plan reveals that he has no intention of involving teachers in that work. We believe that plan is a mistake because it all but guarantees failure.”

While she made clear FTA is not opposed to working with BOCES, “due to a rushed roll-out, inconsistent and incomplete answers, and lack of involvement in the process, we do not support moving forward with the BOCES partnership at this time,” she added.

BOCES officials gave a presentation on the plans Tuesday. John O’Connor, assistant superintendent of management services, said Fredonia’s centralized location and a previously successful relationship with the district, are why they want to move the classes there.

He said BOCES will provide its own full-time staff, including supervisors, counselors and aides, and its own technology such as computers. Although the maximum number of students in the program is 64, it currently has 20 high schoolers and 20 elementary school-age kids.

BOCES’ Jen Sobota said the point of it is to help integrate special education children into their communities.

O’Connor acknowledged there are still plenty of details to be worked out. He said BOCES would ideally like to know by August whether Fredonia would allow it to move the program there.

“Typically the students that have more significant behavioral needs are at (BOCES’) LoGuidice Center,” Sobota said.

The BOCES representatives assured Greenough and board members their questions would be answered. But the teachers’ association head had more to say during the second public comment section, later in the meeting.

Noting a year-old letter from the FTA detailing similar concerns about communication, she said Sortisio and other administrators met with them about it. “Unfortunately, many more negatives have come to light within this year than positives. The obvious big example tonight is the BOCES contract. However, that is simply the latest iteration of the bigger issues,” she said.

“It has become very difficult to determine whether some administrators are telling the truth since their own answers to the same question may change depending on who is asking. Each administrator seems to have his or her own version of the truth. The continual frustration that ensues has been demoralizing and frustrating,” she added.

Greenough concluded with a call for more information to be shared with teachers, and for it to be done respectfully.

“We ask simply to be allowed to share our expertise and to have our professional judgments heard and considered, particularly regarding decisions that affect students and classrooms,” she said. “We are fully invested in fostering a positive, collaborative, trusting relationship with the (board) and administration. We remain hopeful that communication pathways can be mended and that teachers will be invited to participate in any and all discussions involving decisions that will impact our students, our teaching, and our work environment.”

“I taught at the district for 45 years. This was my high school. Things started to change,” LaDuca said. “Things were decided without that partnership … it can’t go on like this.”

She concluded to applause, “Morale is down. It doesn’t have to happen.”