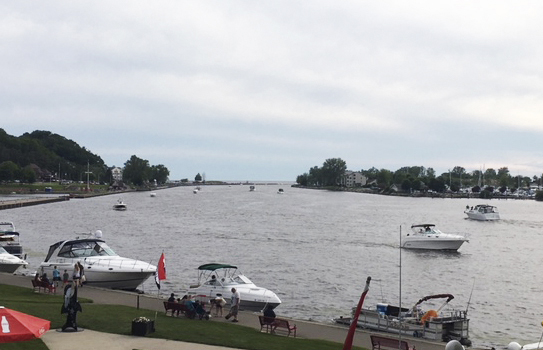 GRAND HAVEN, Mich. — This community of nearly 11,000 residents has a lot in common with our similar-sized city of Dunkirk. Located on the eastern shore of a Great Lake, it was once a bustling manufacturing and industrial corridor. And, it knows just how crippling lake-effect snows can be.

What does it not have in common with our municipality? It is a wall-to-wall destination from late spring through summer.

Located on the west coast of the mitten-shaped state, Grand Haven went through a transformation in the late 1980s. When the big businesses started closing, city leaders began focusing on its waterfronts. Besides having a beach on Lake Michigan, the city is located on the Grand River that is located parallel to South Harbor Drive, one of the main thoroughfares.

From late morning to evening the place is full of energy, especially on weekends. There are numerous condominiums that have been built. Rooftop or outdoor dining is available at a number of restaurants and — just like it should be — pedestrians have priority on the streets and crosswalks.

One of its claims to fame is the Grand Haven Musical Fountain. On a recent Saturday night, more than 1,000 people brought lawn chairs and numerous boats gathered to view the water, lights and tunes of the 20- to 30-minute show opposite downtown.

Dunkirk is still a long way from being in Grand Haven’s class. But that does not mean it cannot have those ambitions. What our city has in its waterfront is a jewel many others are envious of. We just have yet to fully capitalize on all it could be.

Looking at Grand Haven brings a focus of how it can be done. Old brick buildings where factories were once located are an important part of the transformation. These gathering hubs mix the past with today in restaurants and downtown shops. One of the restaurants, which was formerly a movie theater, has a marquee that each day has a different message for tourists and residents.

Significantly, the greatest traffic in Grand Haven — vehicle and pedestrian — is near the waterfronts. It’s where the energy is.

On Thursday evening, Dunkirk’s Fourth of July happening was where it makes the most sense: on Lake Shore Drive with Lake Erie in the background. For more than a decade, summer festivals and concerts have attempted to lure more here as a destination.

It has not been a major flop, but it has not always been the greatest of successes.

Improvements on the City Pier have been a source of frustration for fishermen and some Boardwalk businesses. But when looking at the Grand Haven model, this is a significant upgrade. Once completed, the pier will be more than a parking lot. It will be a destination of sorts that can include tourists and continue to be inviting to those who wish to fish.

Beaches also are welcoming in the Michigan city. They are the host to volleyball tournaments and a place to catch some of the sun’s rays for city dwellers from Grand Rapids, which is about 40 minutes away. Here, they bring people but not crowds.

At last month’s annual Democratic banquet, Buffalo Mayor Byron Brown highlighted the work done in his city to improve the waterfront, specifically Canalside. As we noted in this corner last week, Buffalo and Dunkirk have a lot in common. In the past, both looked at the waters as the key to industry.

Today, as Grand Haven has found, the waters are a magnet for tourism. We here still have yet to find the right recipe.