Shakespeare on the Lake to celebrate third season 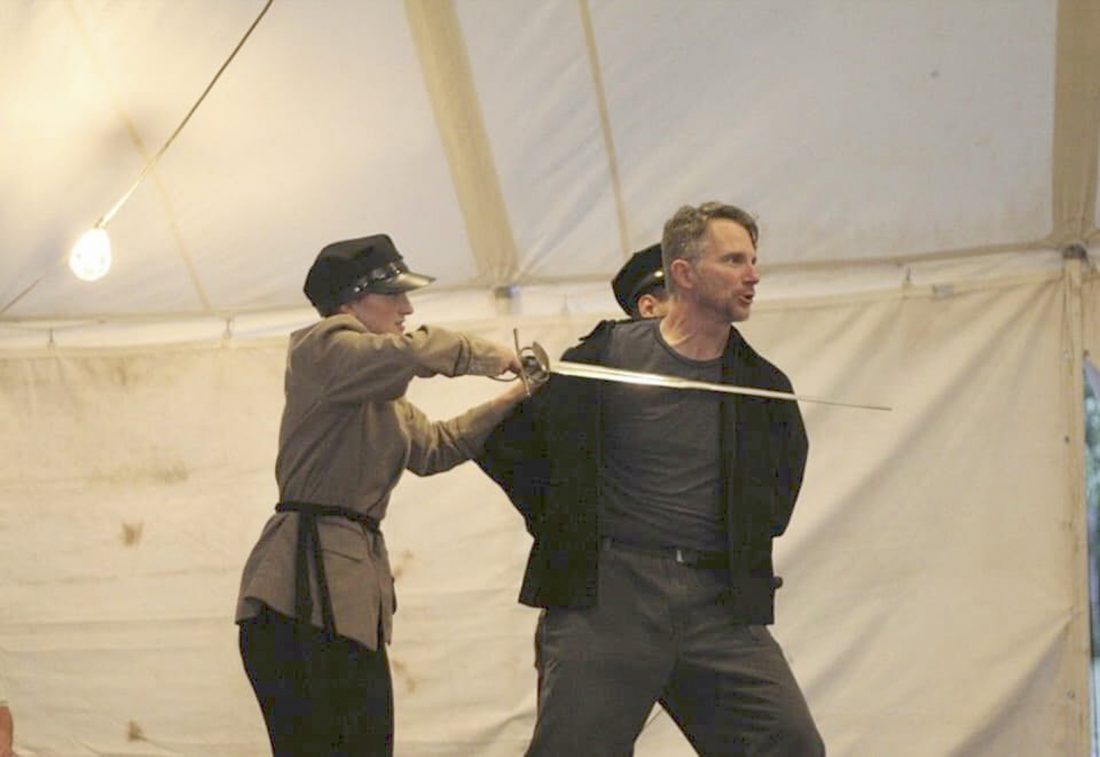 One of the most powerful and influential works of literature of all time, “Hamlet,” William Shakespeare’s timeless family drama, will come to life on the shores of Lake Erie on Wednesday, opening the third season of Shakespeare on the Lake.

“For our first summer, we did just one show: ‘A Midsummer Night’s Dream,’ said Janie Sharon, co-executive producer along with her husband, Ted Sharon. “It was like an experiment, but we sold out! Last year, we decided to ramp it up with two productions, ‘Twelfth Night’ and ‘Romeo and Juliet.'”

A collaboration project between The Playground Academy and Venture Productions, this year’s Shakespeare on the Lake also features two shows under the 40 by 60-feet tent at the Dunkirk Lighthouse: Hamlet from July 24 through 27 and “The Two Gentlemen of Verona” from July 31 through Aug. 3.

“We weren’t sure whether or not to do two shows, since we are so busy,” explained Sharon, who is expecting the couple’s third child. “Then Noah Elman, who just graduated from SUNY Fredonia, came on board. Noah is directing ‘Two Gentleman’ and Ted is directing ‘Hamlet.'”

Elman and associate producer and stage/production manager Kaitlyn Meegan of Westfield, who also graduated from SUNY Fredonia in May, are interns at the Fredonia Technology Incubator, which houses Venture Productions and The Playground Academy. 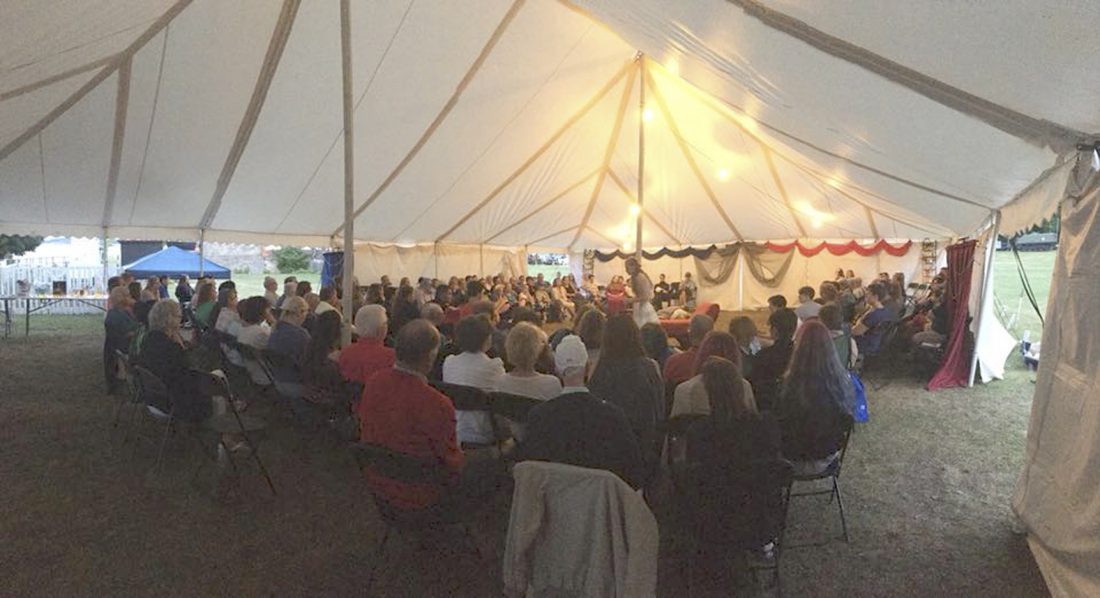 Submitted Photo This year, theater lovers can enjoy William Shakespeare's "Hamlet" and "The Two Gentlemen of Verona" under the large tent at the Dunkirk Lighthouse for the third season of Shakespeare on the Lake.

This is the first year that the Sharons have worked with the Incubator’s intern program, which was created by Chuck Cornell, Incubator director.

“The Incubator has been such a massive influence and help with everything that we’ve done,” said Sharon. “Between The Playground Academy, Venture Productions and now our non-profit, Play On Arts, they’ve been amazing.”

Shakespeare on the Lake plays an important part in the development of Play On Arts, as proceeds from the second annual Opening Night Gala will go toward the non-profit’s endowment fund, which is housed in the Northern Chautauqua Community Foundation. “This year’s gala is a medieval, ‘Game of Thrones’ sort of theme,” Sharon explained. “We’re going to have lots of entertainment: Fire dancers, a magician, a raffle, all kinds of fun.”

The gala takes place on Wednesday, opening night of ‘Hamlet,’ at 6 p.m. at the Dunkirk Lighthouse. It will be catered by Aloe Vera Eatery and, like every performance of SoL, guests 21 and older are invited to bring their own alcoholic beverages. Gala tickets are $55 each or $100 per couple and $30 for children 12 and younger; all tickets include the opening night performance of ‘Hamlet.’

“This is my first year — Ted and I both — not performing in the shows,” said Sharon. “This year, we’re really focusing on giving opportunity to students and to the community, and creating that connection between the community and the arts.” 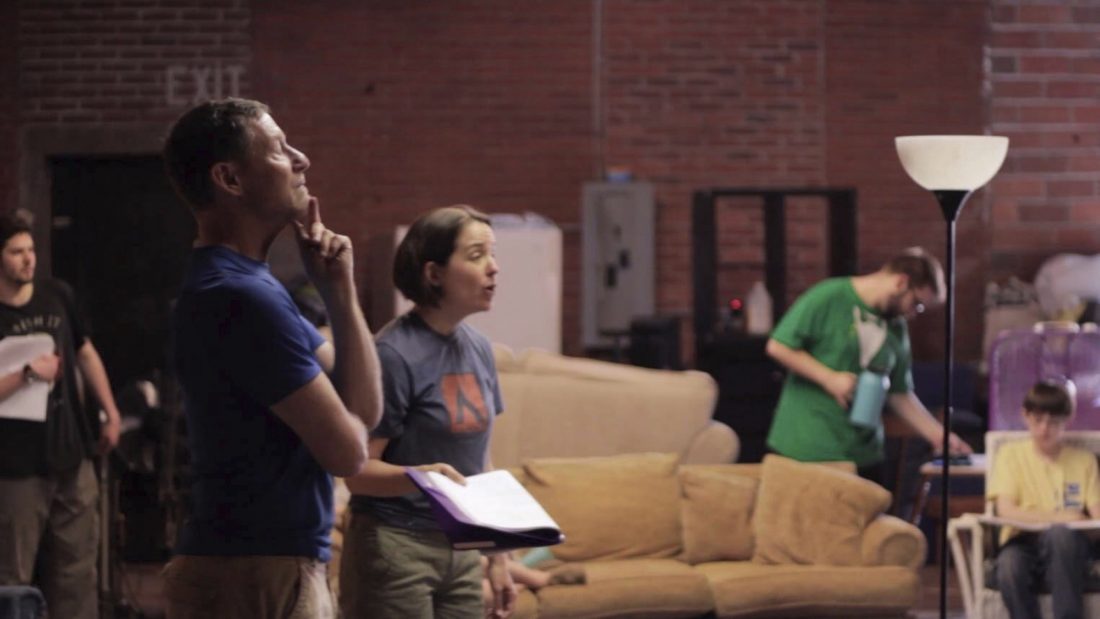 Submitted Photo Community members Paul Mackovak, left, and Alex Holbrook are pictured here rehearsing for "Hamlet" in the Sharons' building at 50 W. Main St. in Fredonia. The building is being restored and converted into a theater through grant funding and will serve as the home for non-profit Play On Arts.

Elman and Meegan are thrilled to take part in these opportunities and gain real-life experience in putting on a show. “It’s a really nice way to introduce the community to what we do at Fredonia, showing them this is what we learned there, and this is how we’re applying it here,” said Meegan.

“And vice versa,” Elman added. “We went to school for four years, and I think already this summer, I’ve had the most engagement with community members. Whether it be working with community members in the show or also through fundraising and marketing in the area, I’ve met so many more people than in my four years kind of insulated on the campus. It’s really helped me feel like I’m more a part of the community.”

This year, community members and SUNY Fredonia professors Jack Croxton and Paul Mockovak are joining the cast, as are Maggie Bryan-Peterson, owner of the Edwards Waterhouse Inn, and former Fredonia mayor Steve Keefe. “Jack and Steve’s grandchildren are also performing — they’re Playground Academy students — so for the third season, we have this fantastic range of experience and age in our cast,” said Sharon.

In “Hamlet,” Alex Holbrook is returning to Shakespeare on the Lake to play Gertrude, Hamlet’s mother. Ophelia will be played by Kristen Wielgasz, who just graduated as valedictorian of her class at Silver Creek Central School and is attending SUNY Fredonia this fall as a BA theater arts major. “It’s a whole family affair because Kim Wielgasz, Kristen’s mother, is our production designer,” Elman explained. “Every single day, she astounds me with the ideas she comes up with. They’re both very talented.”

Elman explained that there are many community members in “Hamlet,” which will be performed in the traditional Elizabethan style. “We envisioned ‘Two Gentlemen’ a little differently,” he said. “Since we knew I would be directing it — a recent Fredonia grad — a lot of our cast is college-aged people, which works really well because our concept for the show is going off to college. The original play is about them traveling to Milan to be at the emperor’s court, but instead of going to Milan, we’ll be going to ‘Royal Milan University.’ All of the experiences that we’re talking about in the show are the exact experiences that we have actually had. It’s been a lot of fun.”

For the first time, this year’s productions include an intermission, and there are food trucks available beginning at 5:30 p.m. every night. Siri Thai will serve food each night of ‘Hamlet,’ and the Om Nohm Gluten Free and Rural Ministries food trucks will be serving food each night of both productions. “Sullivan’s Charbroil is donating ice cream supplies for us to help us raise money,” said Sharon. “When you come to the show, if you purchase any kind of ice cream from us, all of the money will go straight to the Play on Arts endowment fund.”

Ted Sharon and SUNY Fredonia alumnus James Lillin adapted the original texts to abridged versions running approximately two hours, including intermission. “We’ve cut it down to focus on the family drama,” Elman explained. “There’s a lot of historical context that is brilliant and beautiful, but I think isolating the family drama that’s happening can really bring out the interesting characters and relationships.”

This year, merchandise will be available for sale featuring the new Shakespeare on the Lake logo, designed by Incubator intern Jules Holynski. “On almost all of our merchandise, we represent Dunkirk, New York,” said Sharon of the caps, tumblers, lanyards and magnets that will be available. “That has been really important for Ted and me all three summers we’ve been doing this: To really engage this community of Dunkirk and Chautauqua County in something that they might not have had access to in the past; to really feel the pride in our community and how beautiful it is and the amazing gifts that we can give. This is our gift back to the community.”

Tickets are $15 for adults, $10 for students with ID (at the door) and $5 for children 12 and younger. Tickets for “Hamlet” are available at https://www.brownpapertickets.com/event/4279151 and tickets for “The Two Gentleman of Verona” are available at https://www.brownpapertickets.com/event/4280158. Tickets for both productions will also be available to purchase at the door each night. For more information, check out Shakespeare on the Lake on Facebook or email info@playonarts.org.

Read more about Shakespeare on the Lake’s second production, “The Two Gentlemen of Verona” in the OBSERVER later this month.

Submitted Photo Community members Paul Mackovak, left, and Alex Holbrook are pictured here rehearsing for “Hamlet” in the Sharons’ building at 50 W. Main St. in Fredonia. The building is being restored and converted into a theater through grant funding and will serve as the home for non-profit Play On Arts.

Submitted Photo This year, theater lovers can enjoy William Shakespeare’s “Hamlet” and “The Two Gentlemen of Verona” under the large tent at the Dunkirk Lighthouse for the third season of Shakespeare on the Lake.