New surveillance radar tower is up and running 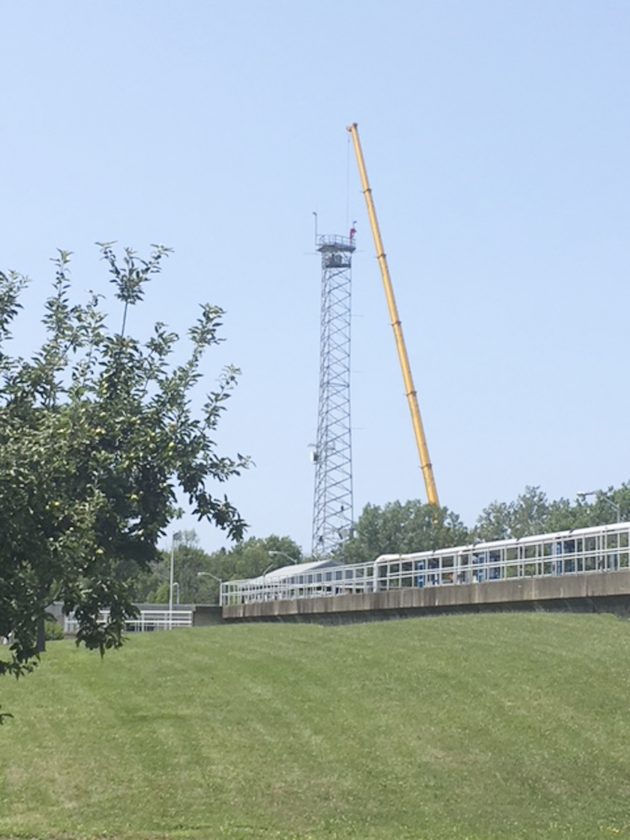 OBSERVER Photo A crane helps erect a U.S. Customs and Border Patrol tower on the grounds of Fredonia’s wastewater treatment plant in July.

“The Fredonia tower completes the radar coverage of the eastern portion of Lake Erie and will link with the existing towers in Sturgeon Point, New York and Ripley, New York,” said Mike Niezgoda, public affairs officer for the Buffalo office of the USCBP, in response to e-mailed questions from the OBSERVER. “The purpose of the tower is to complete the series of three towers and to provide complete radar coverage of eastern Lake Erie, from Buffalo, New York to Erie, Pennsylvania.”

The tower is unmanned but its technology is monitored from the Buffalo sector headquarters.

“The equipment is a coastal surveillance radar system with a camera package that functions both in the day and at night,” Niezgoda said. “Additionally, there is hardware to link the tower wirelessly to U.S. Border Patrol’s other sensor towers.”

The structure of the tower was built in July and the technology inside it was added earlier this month, Niezgoda said.

“The approximate cost of the tower and technology is $1.1 million,” he said.

The tower was built by an Ohio contractor and the tower structure was fabricated by a Kentucky company, but “a variety of local sub-contractors” were used, Niezgoda said. He added that the technology in the tower was installed by the Naval Information Warfare Center of San Diego, which the USCBP partners with.

The Fredonia Board of Trustees approved the use of village property for the tower in a September 2014 meeting.

Border patrol agent Joe Kruszynski attended that meeting and the OBSERVER quoted him as saying, “I think the biggest thing for us, up here on the northern border in this area we don’t have any technology. We don’t know exactly what is coming across the border at any given moment. … We’ll be able to separate the pleasure boaters, recreation boaters from what traffic is actually coming across the border.”

He added, “Any law enforcement agency that wants to tap into this technology by going through an IP address, we’re going to allow them to view the radar.”