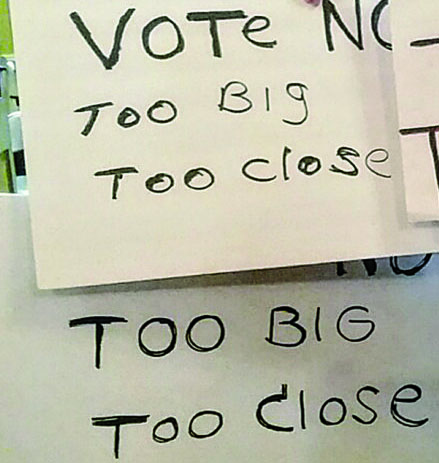 OBSERVER file photo Opponents of the Villenova wind farm are likely to be at Wednesday’s hearing.

VILLENOVA — In an Article 78 lawsuit filed last September by 18 Villenova residents, the Town Board came under fire for having an inadequate environmental review for its 29 planned wind turbines, as well as multiple violations of town ordinances, including a planning board of only two members.

While the board did approve an updated Supplemental Environmental Impact Survey (SEIS) during the August meeting, they also moved to abolish the planning board, despite the fact that five longtime Villenova residents publicly expressed their interest in serving on that board last month.

To the residents who filed the lawsuit, five of whom were present at this meeting, the absence of a Planning Board is cause for concern, as many do not feel all members of the Town Board can act impartially regarding Ball Hill, the proposed wind farm. According to the petition, Town Board member Nathan Palmer’s mother and father-in-law have a contract with RES, as does his sister-in-law and husband, which the petition claims was never disclosed to the town board or to the public, in violation of Article 18 of the General Municipal Law. Town Board member Sarah LoManto has a contract with RES, but did recuse herself from the vote. However, “she remained in the room for the entire discussion at all the meetings concerning the project in violation of Article 18,” the lawsuit states.

At the time of the lawsuit, the two members of the Planning Board were Joseph Goodway and Howard Crowell.

Goodway’s wife is Villenova town clerk, Julie Goodway. Crowell and his wife have a wind turbine contract in Arkwright, as do his brother and nephew.

The lawsuit states that the responsibility of the planning board is to make recommendations to the town board — a duty that cannot be fulfilled ethically or legally by only two members, as five or seven members are required by law. “Because the Town Board … referred the proposed project to a Planning Board which was not properly constituted, and accepted the recommendation of such a town Planning Board, the town of Villenova Wind Law has been violated,” the lawsuit states.

Ardillo thanked all who expressed their interest and collected their letters and contact information for further consideration, as planning board seats are appointed by the town board. Of the five who volunteered, three are petitioners/plaintiffs in the lawsuit filed against the town: Crowell, Ermer and Nancy Huber.

Residents were surprised to learn at the August meeting that the planning board is vacant, according to a resolution prepared by Hodgson Russ (the firm representing the town board in the Ball Hill Wind proceedings) and read by town attorney Donald Michalak during the August meeting:

“Basically, it says that the town board elects to abolish the planning board, and the town board itself will take over any functions that planning board had,” Michalak summarized. Board members led by Yvonne Park, who served as deputy supervisor in Ardillo’s absence, voted unanimously to approve the resolution.

LoManto promptly moved to adjourn the meeting, despite the fact that “Privilege to the floor” was listed as the last agenda item, a move which triggered an outcry from those members of the public in attendance. “There will be no comment period,” Park said, upon adjourning the meeting. “We’re not having privilege of the floor.”

Referring to the vacant planning board, one resident said, “When did this happen? Another secret held from the public. Now they said the town board will handle all business — no other opinions allowed!”

Residents were disappointed in the manner in which the new SEIS posting was made. During the meeting, Michalak, quoting the resolution (also prepared by Hodgson Russ), said that upon board approval, the new SEIS would be “filed and put on the Ball Hill Wind website and that the public comment period will commence on Aug. 15 and end on Sept. 23.”

“Michalak said public comments on the SEIS can be made and sent beginning Aug. 15,” Graziano told the OBSERVER. “Well, the SEIS was not available online for days after. Even on the following Monday, it was not yet online. They owe the community more days, and they never said where the comments were to go. (During the meeting), we were not allowed to speak or ask.”

The new SEIS is in compliance with Chautauqua County Supreme Court Judge James H. Dillon’s June 24 ruling, which put turbine construction on hold until a new environmental impact study was conducted regarding the proposed turbine height increase from 495 to 599 feet. While not required to, the board moved to share the SEIS with the Chautauqua County Planning Board for their input. The SEIS, dated Aug. 13, 2019, is now available to view on www.ballhillwind.com.

The OBSERVER reached out to Ardillo for comment, but calls were not returned as of Wednesday. The public hearing regarding the new SEIS is set for Wednesday at 6 p.m. in the Hamlet United Methodist Church, 1119 NY-83, South Dayton. The next meeting of the Villenova Town Board, which includes the public hearing for the proposed law to abolish the planning board, is Wednesday, Sept. 11 at 7 p.m. at the town hall, 1094 Butcher Road, South Dayton.