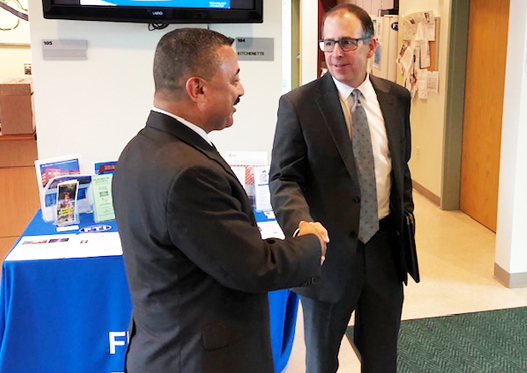 Wells Enterprises Inc. announcement this week to move forward with an $87 million investment in the Dunkirk Fieldbrook Foods plant is not something that happened overnight or by accident. It does, however, come from a recipe that includes key ingredients of communication and relationship building.

This is something the Chautauqua County Industrial Development Agency and the city of Dunkirk have been doing quite well in recent years. Fieldbrook, formerly Dunkirk Ice Cream and owned by Arbor Investments, had been a quiet partner in the north county for too many years.

That does not mean it was always amicable. In the past, city policies would lead to fines against the company for exceeding the limit on discharges through the city wastewater treatment plant. This led to sore sentiments on both sides.

But attitudes and actions changed.

When Fieldbrook announced its first expansion in December 2016, it was the result of partnerships built with the county and city through discussions and meetings. At that time, state Lt. Gov. Kathy Hochul came to Dunkirk to participate in the announcement as current Mayor Wilfred Rosas sat in the background.

It was a similar scene this week, minus Hochul, as county IDA board members gathered around the conference room table in the State University of New York at Fredonia incubator to consider Wells’ latest proposal for the facility. With Rosas sitting off to the side, plans that include four to six new manufacturing lines and a new power substation were approved to be in place by the end of 2023 at the city plant. The result: tremendous investment, commitment and up to 100 new jobs.

Wells, which finalized the purchase from Arbor in the spring, decided after only three months of being connected to Dunkirk it wanted to expand here. Within the last week, the company purchased a location in Henderson, Nev., adding to its operations in New Jersey and its home base in Le Mars, Iowa. It definitely had other options.

“We’re very excited about the opportunity here to grow the facility here in Dunkirk,” said Tom Anderson, director for finance and accounting for Wells Enterprises.

County Executive George Borrello, who is seeking election in the state Senate’s 57th district in November, made a commitment his first three months in office to meet with 100 businesses in his first 100 days in 2018. His findings were eye opening. Many of the companies are satisfied with being located here, though some need a greater skilled work force. Most importantly, these firms were thrilled to have government come to them.

Since those visits, Borrello’s vision has been carried out through the IDA in working with companies that are already here and looking for additional investment. Not including Rosas’ efforts in this deal, however, would not be fair. Once he became city mayor, he reached out to the plant and brokered a deal that reduced the fines levied for high waste in the past and a new rate going forward.

It was a far different approach than how the village of Fredonia trustees recklessly handled the Carriage House situation in 2013. Even with warnings that ConAgra was looking at options of possibly closing the local plants, trustees failed to meet with company leadership while increasing taxes, water and sewer fees and challenging the manufacturer’s property assessment within the next year.

A message was definitely sent.

ConAgra may have not have stayed no matter what happened. But if there is a possibility a major company that employs 400 workers is looking to exit the area, local government officials must not be the ones offering to hold the door open for them to venture off to Kentucky and Illinois as village trustees shamefully did then.

In the Wells-Fieldbrook case, Rosas and county leaders were pro-active. In documents filed with the IDA, Wells hinted if public support could not be garnered for this massive city effort, it might have to look to the east.

“The company could choose to consolidate all of its current two-state operations in New Jersey, which would prove satisfactory in maintaining existing manufacturing requirements and allow for continued manufacturing capacity moving forward,” the application stated.

Moving forward, Wells has its sights set on becoming the leading brand for frozen dairy treats in the nation. The location here will be part of that effort.

“That gives us now, with this facility, not just a Midwest location, but an East Coast presence in Dunkirk and a West Coast presence in Las Vegas metro area,” Anderson said Tuesday when addressing the IDA board. “This kind of demonstrates the commitment that we have to growing our organization, ideally, at some point the No. 1 manufacturer of all ice cream products in the United States.”