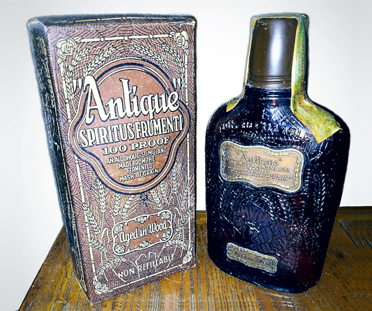 This 100-proof whiskey from the 1920s will be shared with ticket holders.

Celebrating memories of the many “mom-and-pop” taverns which once operated throughout the city, the Dunkirk Historical Society will host a tasting at its museum of a uniquely rare, nearly century-old bottle of Prohibition-era “medicinal” whiskey at 7 p.m. Thursday, Dec. 5 – the 86th anniversary of the repeal of Prohibition in the United States.

The museum will be open 6:30 to 8:30 p.m. for a 1930s exhibit and Prohibition-era themed party with guests encouraged to wear Roaring ’20s attire, and selfies may be taken with one of the scarcest known bottles of vintage liquor. “Taste of Prohibition” proceeds are just the first step in a long-term fundraising drive to finance eventual return of the Neptune fountain to Dunkirk.

“After Prohibition, through the end of World War II, many neighborhood bars opened around Dunkirk, and residents may recall when they, their parents or grandparents socialized in these local watering holes, most of which also served home-made food, that have faded into history,” said museum director Jane Babinsky. “Those wishing to share stories should bring old photos as well as advertising materials, bottle openers, coasters, glassware, matchbooks and menus.”

A total of 25 tasting tickets are available at $40 each, limit two per purchaser on a first-come basis. Participants must be at least 21. Beer and wine, refreshments and appetizers will also be served. Tickets must be purchased in person with cash or check and proper ID at the Dunkirk History Museum, 513 Washington Ave., 1 to 4 p.m. Mondays/Fridays, 3 to 6 p.m. Wednesdays, except holidays. To confirm ticket availability and museum hours, call 366-3797.

Only ticket holders may participate in the actual tasting scheduled for 7 p.m., each receiving a half-ounce of 100-proof whiskey. “Antique” Spiritus Frumenti was aged in wood barrels from 1914 until 1927, then bottled by Frankfort Distillery of Louisville, Kentucky. The 16 oz. or one-pint flask dates back 92 years to when its medicine-cup tin cap was sealed with a federal tax stamp.

This bottle is among three from the estate of J. Howard Smith, who died in 1953. He saved the bottles as souvenirs after Prohibition ended, while working as a pharmacist for the West Drug Company at 309 Central Avenue in Dunkirk. Paul Scheeler, his grand-nephew and a member of the board of directors of the historical society, donated the scarce bottle, valued at $5,000.

“Intact bottles of Prohibition whiskey are rare, and so this is a once-in-a-lifetime opportunity to experience American history from the time of speakeasies when gangsters like Al Capone were pursued by The Untouchables,” said Scheeler. “To verify that the contents are palatable, one of the other identical bottles was test-sampled last year and tasted as smooth as one might hope.”

Prohibition lasted from 1920 until its repeal at 5:32 p.m. ET on Dec. 5, 1933, when Utah became the 36th state to ratify the 21st Amendment. During this period, the manufacture, sale and transport (bootlegging) of alcoholic beverages was illegal in the U.S., with the exception of medicines and “alcoholic stimulants” as prescribed by doctors and dispensed by druggists.

A multi-year capital campaign will be needed to ultimately bring the historic Neptune fountain back to Dunkirk, including moving expenses and museum upgrades. Purchased in 1883 for the Brooks Locomotive Works headquarters, Neptune was later installed as a working fountain in Washington Park from 1937 until 1967. Restored by professor Robert Booth in 2001, Neptune has since been displayed in the natatorium on the SUNY Fredonia campus. Now owned by the Historical Society of Dunkirk, it was determined that due to its age and historical significance to the community, the 900-pound monument should be permanently exhibited in the museum.