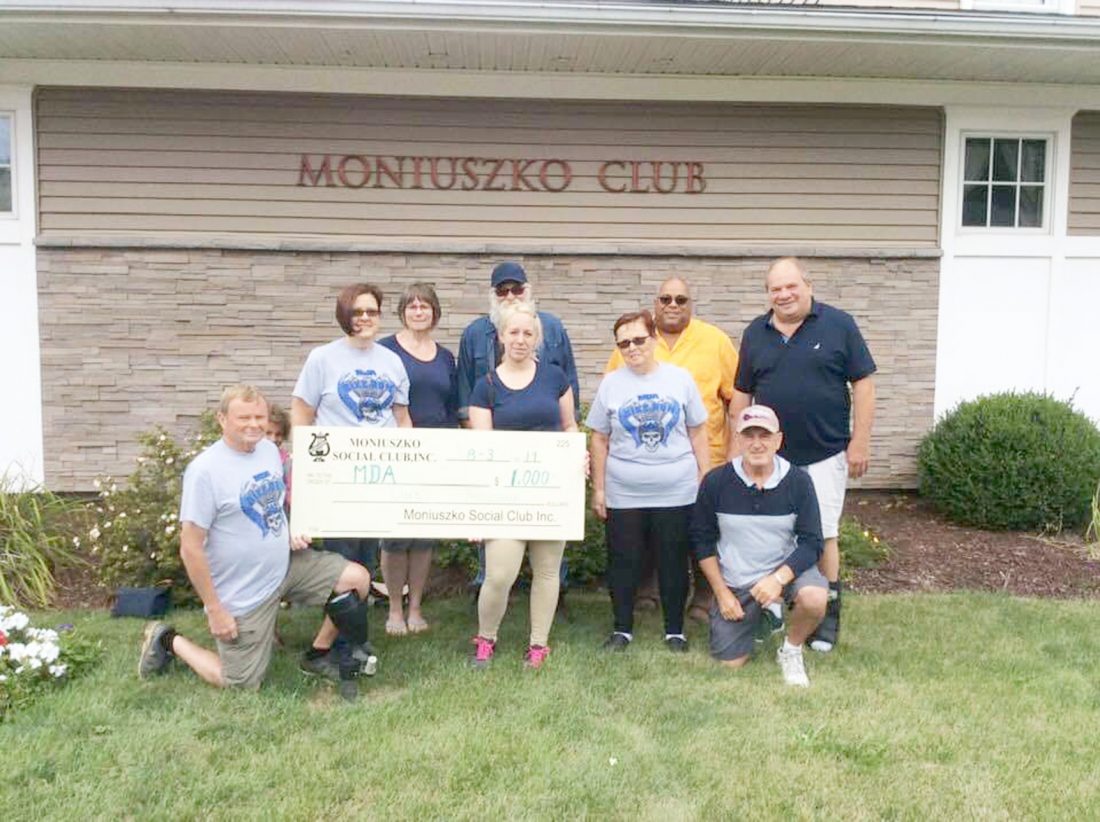 STOCKTON — The 15th annual MDA Bike Run and Campout was held on Aug. 30, 31 and Sept. 1 at Chautauqua County Fireman’s Fraternity Campgrounds. The event was sponsored by Dunkirk Moniuszko Club, and co-sponsored by The American Legion Riders of WNY. The weekend was in honor of Erik Robbins and Brian Robbins, who have been the Good Will Ambassadors for this event for the past 15 years and suffer from this crippling and terminal disease.

The event was in memory of the following individuals:

¯ Jane Jusko Eagan, grandmother of Erik and Brian Robbins, who passed away on March 30, 2005.

¯ Joan Burns who passed away on Jan. 22, 2008, at the age of 36 from Muscular Dystrophy and was an advocate for the handicapped and spearheaded the effort to make all public buildings in Dunkirk handicapped accessible;

The campgrounds were filled with campers and bikers who came together over the Labor Day weekend to raise money for a very important cause.

Friday evening, live music was provided by Just Another Band (J.A.B.) from Erie, Pa., who played from 6 to 10 p.m. Jim Walker of Big Jim’s BBQ came in from Indiana to serve up awesome BBQ. Thank you to the American Legion Riders of WNY for shucking 8 bags of corn on the cob (350-plus ears of corn) Friday evening in preparation for dinner on Saturday.

Starting at 10 a.m. on Saturday, The American Legion Riders of WNY assisted with registration for the motorcycle run. All registered participants received a specially designed 15th Annual Lapel Pin and the first 100 registered received a commemorative 15th annual t-shirt designed and printed by Creative Screen Printing.

Creative Screen Printing was set up all weekend with mobile t-shirt printing for others wanting to purchase shirts. Starting at noon, the 175 registered participants which included 129 motorcycles and a school bus provided by First Student (17 passengers), were led out of Stockton by members of The American Legion Riders of WNY. The first stop was the Nickel Plate Depot in Brocton, where hot dogs were served to all. The motorcyclists continued to stop points including the VFW Post 557 in Ellery Center, The Vegas Pad in Kennedy, Zollinger’s South Dayton Hotel, and Coughlin’s Pub in Fredonia, before returning to the Chautauqua County Fireman’s Fraternity Campgrounds.

The participants returned for dinner at 5 p.m., which included a half chicken prepared by Dan Skubis, Angelo Rivera, Doug Owen and Dennis Bouquin. The kitchen committee consisted of Judy Ames, Misty Winslow, Jamie and Bobby Michaels, Sue Jensen, Sheri Boorady, Kelly Berenguer and Alyssa Watts. Sides included green beans, corn on the cob donated by Feinen’s, Yerico’s, and Lasecki’s, and potatoes and corn donated by Roberto Fred Farm, bread donated by Better Baked Foods and beverages from Shur-Fine in Cassadaga, Dollar General in Brocton and Certo Bros. Thank you to St. Joseph’s Catholic Church in Fredonia for allowing us to use their electric cookers to serve all the wonderful food.

Once again, the New Direction Band out of Crawford County, Pa., returned to our event and provided an awesome show and live music from 6 to 10 p.m. Saturday evening. The silent auction and big board raffle items totaled 200-plus items and provided items for all ages with plenty of opportunity to win. A 50/50 drawing was also held.

Thank you to Bill Vacanti for donating the Jack Daniel’s Sturgis 79th Anniversary Private Stock signed bottle direct from Sturgis Motorcycle Rally. The bottle cannot be purchased in any store. It was bottled specifically for the 79th Sturgis event by the Jack Daniels Distillery. There was also a laser etched Sturgis 79th anniversary logo on the bottle. The bottle, custom coaster and box were all signed by representatives from the Jack Daniel’s Distillery. These items were purchased by Bill at Sturgis and then he in turn asked for the autograph and special note on the bottle and box stating “MDA Run 2019.” Also included in the package was a Gremlin Bell from Sturgis. Collector’s value could go well over $500 as stated by Jack Daniels.

Thank you to Cindy Marucci for taking photos all weekend and posting them on our Facebook page “MDA Bike Run & Campout.” Thank you to Greg Kiendl of Wild Cat Karaoke and DJ for providing entertainment from 1 to 4 p.m. on Sunday during our annual “kill the keg” event. Edziu Wallace would like to thank the “kill the keg” gang which included Scott Chrispen, Steve Colburn, Wilbur Bush, Jeff Abbey, Lauren Douglas, Jim Michaels, John Pazderski and all the others who came to hang out all afternoon.

Edziu and Tina Wallace would also like to thank the Dunkirk Moniuszko Club board members and club members for sponsoring our event again this year. Without your generous sponsorship, this event would not be possible.

Thank you to all the motorcyclists and campers who support this event each year. Thank you to the following: Chautauqua County Fireman’s Fraternity, Inc. Board Members and Campground Caretakers, Terry and Stephanie Grisanti; American Legion Riders of WNY for planning and leading the bike run; Nickel Plate Depot for welcoming us and serving hot dogs, the VFW Post 557 Ellery Center, The Vegas Pad, Zollinger’s South Dayton Hotel and Coughlin’s Pub for allowing us to stop at your establishments for refreshments; Creative Screen Printing; and First Student Bus for providing a bus for those who do not ride a motorcycle.

Thanks to all the businesses, groups and individuals for monetary donations and auction items for the 2019 event including: