Common Council gets back to business following election 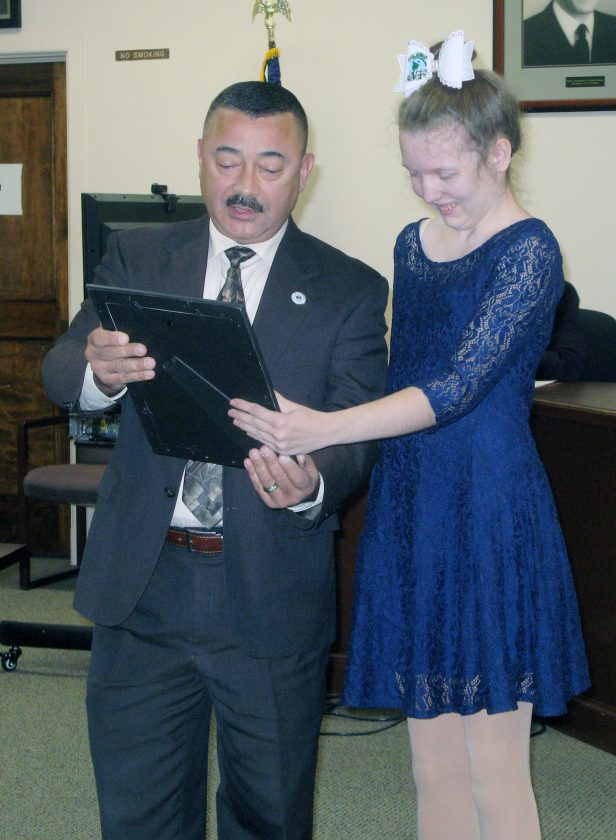 OBSERVER Photo by Gib Snyder City resident Mallory Wojcinski was honored by Mayor Willie Rosas during Wednesday’s Common Council meeting for her contributions in helping to make the lives of others better as a community advocate in the City of Dunkirk.

The Dunkirk Common Council convened Wednesday for the first time since Tuesday’s election and made relatively quick work of its agenda.

A public hearing at 5:20 p.m. on whether the city could grant Spectrum Northeast LLC a 15-year franchise renewal agreement drew no speakers and was quickly adjourned. When Resolution 93 was brought to a vote it passed unanimously, as did the other resolutions.

Resolutions 94 and 95 saw the city accept two donations from Chautauqua County on behalf of the Lake Erie Management Commission. A fish grinder will be installed at some point at the Dunkirk harbor while Resolution 95 was a donation of $10,000 to partially reimburse the city for the cost to prepare a comprehensive plan for the city.

Resolution 96 awarded Clark Patterson Lee of Jamestown the contract to provide schematic designs, design development/construction documents along with construction administration at a cost of $76,500 for upgrades to the Dunkirk Senior Center. The bid was one of 11 submitted for the project funded by a $750,000 grant through the Dormitory Authority of the State of New York.

All requests were approved but one.

The request of the Northern Chautauqua Conservation Club that the city not schedule any other events during its annual walleye derby Aug. 6 through 8 was not acted on. During the workshop session prior to the meeting, Mayor Willie Rosas expressed opposition to the request, noting there may be events in other parts of the city. Rosas later confirmed that the boat races will not be held at the time.

During the regular meeting, Councilman-at-Large Andrew Woloszyn explained the city does not have a problem with the Con Club event.

“We do have a problem with some of the verbage in the request,” Woloszyn said, adding it was not approved pending some changes in the request while emphasizing “it did not mean the event was disapproved.”

The 25th annual Juneteenth Celebration was approved as requested for Memorial Park on June 13 and 14.

A written notice about a dangerous tree and another about vehicle damage caused by a city tree were referred to the proper departments.

A highlight of the meeting was a presentation of a Certificate of Recognition by Mayor Rosas on behalf of council and citizens to city resident Mallory Wojcinski to honor her for her caring, drive and determination.

“Mallory Wojcinski demonstrates evey day through her actions and participation that she truly cares about the community and the people who live here,” the certificate stated in part.

Prior to the start of the meeting former Fire Chief Don Ziemba, who recently passed away, was remembered with a moment of silence at the request of Woloszyn.