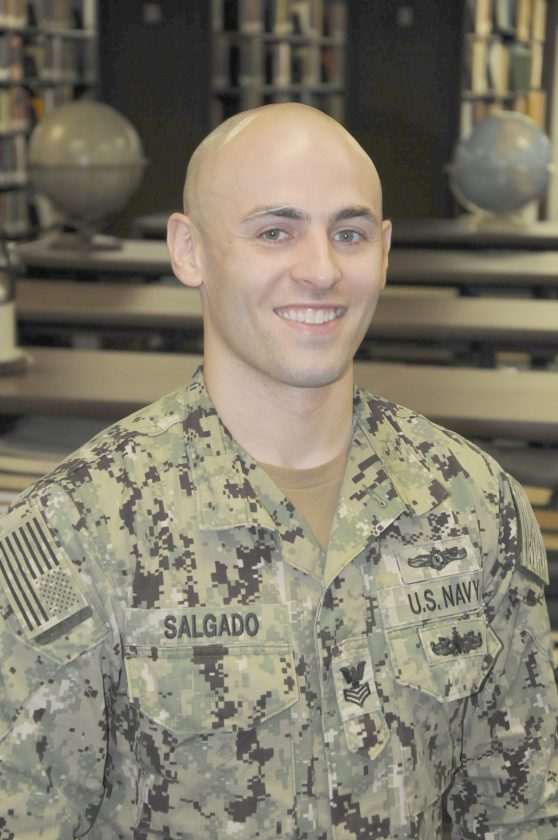 STENNIS, Ms. — Most Americans rely on weather forecasts to plan their daily routine. The U.S. Navy is no different. With numerous ships, submarines and airplanes deployed around the world, sailors and civilians serving with the Naval Meteorology and Oceanography Command at Stennis Space Center, Mississippi, advise Navy leaders about the impact of ocean and atmospheric conditions on future operations.

Petty Officer 1st Class Jonathan Salgado, a 2007 Dunkirk High School graduate and native of Dunkirk, N.Y., is one of those responsible for providing timely, comprehensive and tactically relevant information for ships, submarines, aircraft and other commands operating throughout the globe.

As a Navy aerographer’s mate, Salgado is responsible for sailing aboard naval vessels around the world to collect oceanography and bathymetric data.

Salgado credits success in the Navy to many of the lessons learned growing up in Dunkirk.

“My hometown is very diverse, which prepared me for working alongside my shipmates from all over the U.S. to complete our mission,” said Salgado.

“Naval Oceanography defines and applies the physical environment for the entire Navy fleet from the bottom of the ocean to the stars,” said Rear Adm. John Okon, Commander, Naval Meteorology and Oceanography Command. “There isn’t a plane that flies, a ship or a submarine that gets underway without the sailors and civilians of Naval Oceanography.”

Salgado is playing an important part in America’s focus on rebuilding military readiness, strengthening alliances and reforming business practices in support of the National Defense Strategy.

“Our priorities center on people, capabilities and processes, and will be achieved by our focus on speed, value, results and partnerships,” said Secretary of the Navy Richard V. Spencer. “Readiness, lethality and modernization are the requirements driving these priorities.”

Though there are many ways for sailors to earn distinction in their command, community and career, Salgado is most proud of earning his master training specialist qualification in 2017.

“This qualification gives me the knowledge to train and instruct my shipmates to the best of my ability,” said Salgado.

Serving in the Navy is a continuing tradition of military service for Salgado, who has military ties with family members who have previously served. Salgado is honored to carry on that family tradition.

“My cousin, Tristan Collazo, served six years as a machinist’s mate aboard the aircraft carrier, USS Enterprise,” said Salgado. “He was the biggest influence on me wanting to serve my country.”

As a member of one of the U.S. Navy’s most relied upon assets, Salgado and other sailors know they are part of a legacy that will last beyond their lifetimes providing the Navy the nation needs.

“Serving in the Navy ensures freedom, safety and security for my fellow Americans, as well as working towards lasting peace with other countries,” added Salgado.