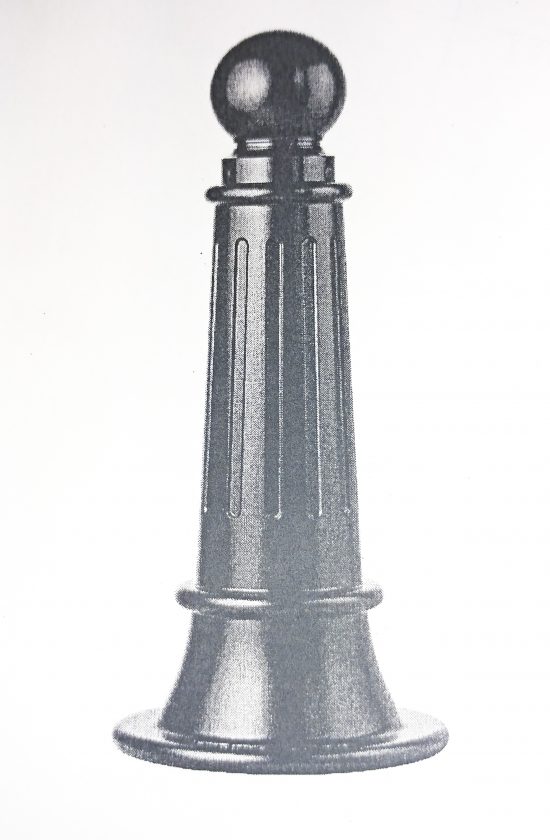 OBSERVER Photo by M.J. Stafford Fredonia Mayor Athanasia Landis is proposing that four of these iron bollards get installed in front of the house at the corner of Risley Street and University Place.

Fredonia Mayor Athanasia Landis wants the village to protect the historic house at the corner of Risley Street and University Place from out-of-control drivers.

At the Nov. 4 Board of Trustees meeting, Landis said vehicles have crashed into the large hedge in front of the building twice in the last two years. On one of those occasions. the car wound up inside the house. “A person was sleeping on a couch and could have been killed,” the mayor said — but a wall saved the person’s life.

While the homeowners are installing a wall behind the hedge, Landis said they would like the village to do something on its right-of-way. The mayor said she has explored options and proposes the installation of four iron bollards at a cost of about $3,000.

Trustee James Lynden asked if there were any alternatives to that. “I looked for some time and that’s the only thing I found that would do the job and be decorative,” Landis replied.

Trustees expressed concerns that iron bollards could be a bit too sturdy, to the point that they could wreck a car that runs into them. Trustee Roger Britz questioned if the village could face a liability lawsuit if a car runs into the bollards and is damaged. Village attorney Dan Gard replied that he didn’t think so, noting that the state of New York regularly places heavy blocking items such as bollards and boulders at its Thruway rest stops.

“We should protect residents of the village,” Landis said. “There’s a young family in (the house). Of course I would prefer something that would not kill the drunk driver.”

Trustee Michael Barris mentioned new technology in place on a road near Herkimer: Large water tanks are in place to help stop runaway vehicles. He called it “new technology” that is better than bollards and boulders.

“So are the sand pits they have for trucks going off the roads, and we’re not going to have one of those there,” Lynden replied.

Police Chief Bradley Meyers noted, “There are breakaway items that you can put down that would stop the car.” He mentioned barriers made of wood.

The board took no action on Landis’ proposal. She asked them to consider it and revisit it at a later meeting.

Landis told the OBSERVER that she is not committed to using bollards at the site– she just wants something in place to protect the house and the family inside it.