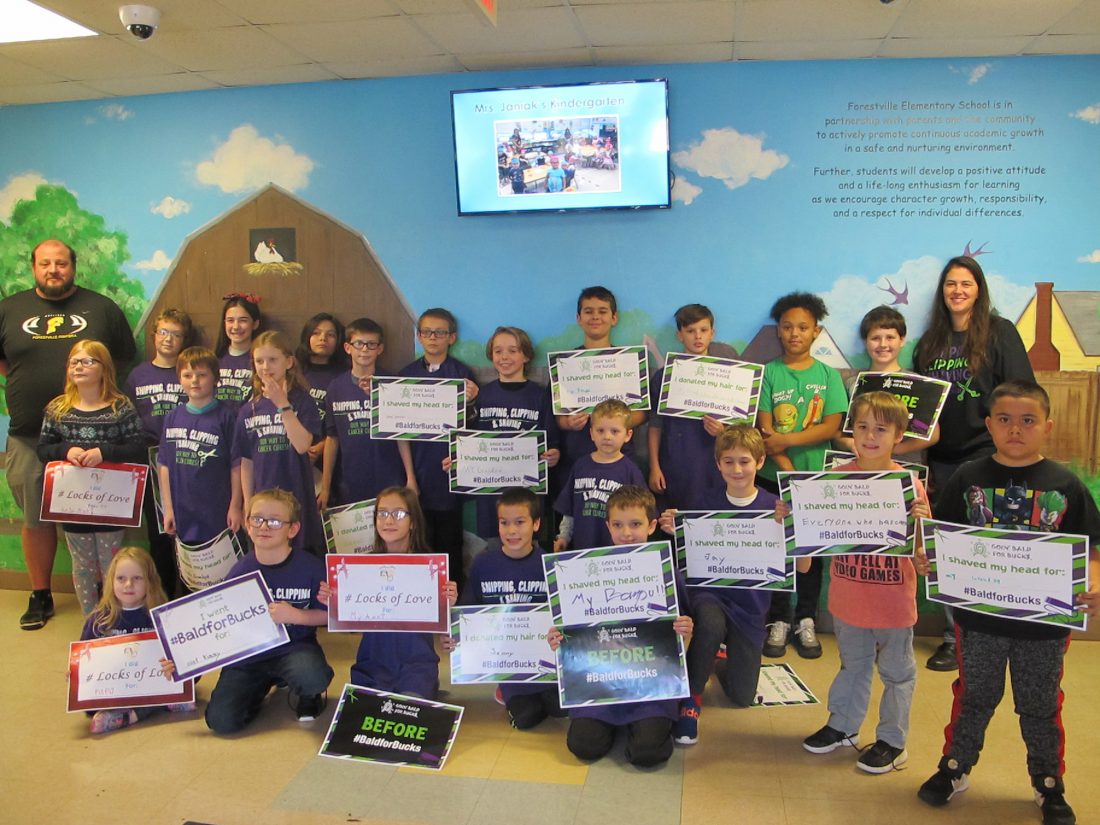 OBSERVER Photo by Mary Heyl In this “before” picture, 22 Forestville Elementary students plus two staff members donated their hair to Bald for Bucks or Locks of Love on Tuesday.

FORESTVILLE — One hour, 25 haircuts and $6,500 later, Forestville Elementary students once again proved that spirit, effort and determination are what matter most in their annual Bald for Bucks and Locks of Love event.

Reading teacher Jennifer Dunn and fourth grade teacher Katherine Gorczyca were excited to kick off Tuesday’s event in the elementary gymnasium, where the entire school was gathered to cheer on their classmates who were donating their hair. While 25 students and staff members donated their hair, several more students also raised money for Roswell Park Cancer Institute.

Dunn announced that sixth grader Caleb Kimmery was the top money raiser at $2,300. Kimmery is the only Forestville Elementary student who started shaving his head for Bald for Bucks in PreK, and has done so every year since.

“My Grandpa Kimmery became my reason to keep up with Bald for Bucks,” said Kimmery. He added that his Uncle Kevin recently survived cancer and that a close family friend, Marie, had recently been diagnosed. “She cut her hair and would like me to donate it on her behalf to Locks of Love,” he said. “…I want everyone to know that you don’t have to cut your hair. Don’t let that stop you from raising money every year for this cause. You can just raise money to support Roswell Park. Everyone in some way is affected by cancer. The more money researchers have, the faster it can be a thing of the past.”

Dunn announced that sixth grader Anna Gilman was the second top money raiser at $1,240. “This year, I am donating my hair in memory of my Grandma Karen, my Uncle Kevin, and a family friend, New York State Trooper Jeff Cicora, who passed away this summer from 9/11-related cancer,” Gilman explained. “I hope I can honor their memories with this donation.” 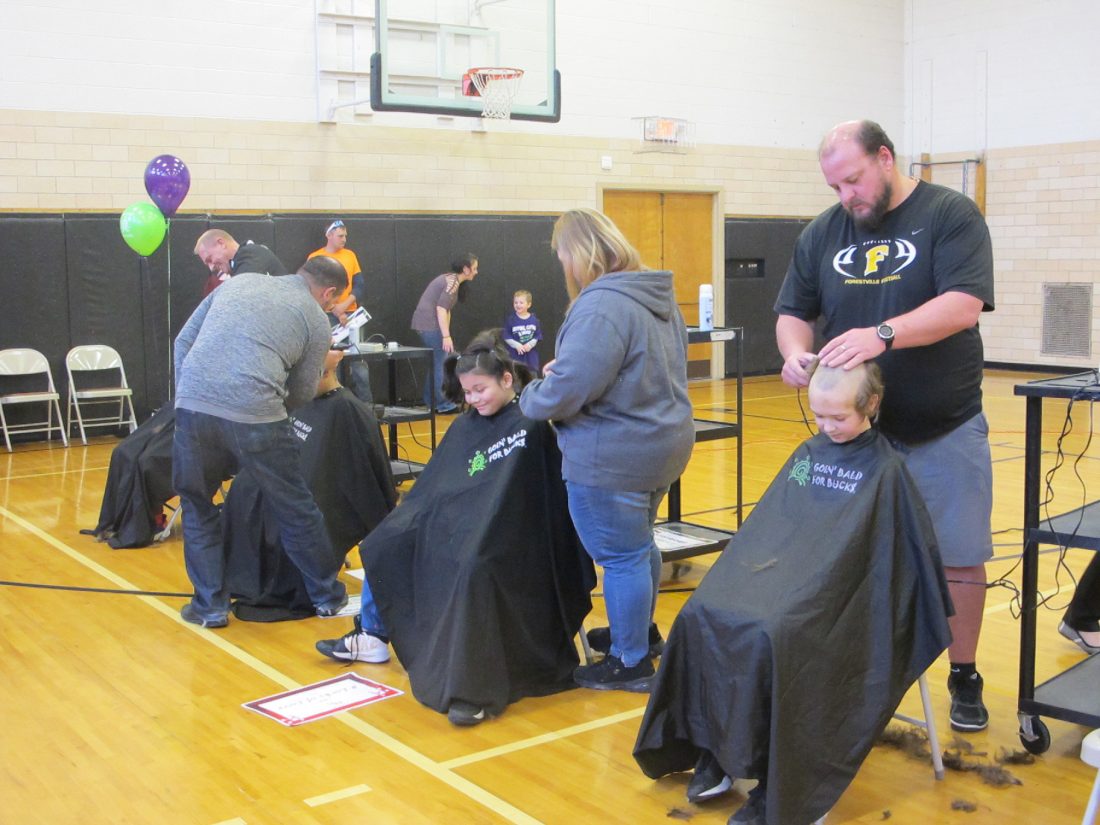 In total, Forestville students raised a whopping $6,593, which is $564 more than last year. Alexandria Hoaglund, event coordinator from Roswell Park Cancer Institute, was pleased to accept the school’s donation and congratulated students on their outstanding efforts.

To show students their appreciation, Dunn and Gorczyca gave scarves to all the girls who volunteered to cut their hair and hats to all the boys who are going “bald for bucks.” Gorczyca recognized the volunteer hair stylists who donated their time for the event: Kim Marsh, grandmother of Kimmery, and Abby Thompson, Forestville alumna and mother of Madison Thompson. Elementary Principal Lindsay Marcinelli and staff members Greg Greenough, Scott Hazelton and Gary Worosz also stood behind the stylists’ chairs with clippers to shave students’ heads.

Over the course of an hour, students and staff had their hair cut, as their classmates clapped and music played. DJ Anthony from Buffalo’s KISS 98.5 was excited to cheer students on, as he is one of the area’s biggest supporters of Bald for Bucks and has attended Forestville Elementary’s annual event for several years. Superintendent Rene Garrett and school board members Sylvester Cleary and Carol Woodward, president, also attended the event, along with several parents and family members.

“Forestville is such a generous and caring community. It’s hard to imagine our small school raised so much money,” Dunn said to the excited students. “You should be so proud of yourselves for what you have done here today. We know your families are proud and so is everyone at Forestville Elementary School, too!”