FORESTVILLE — The Fredonia Star Riders, a 4-H Club with their home base in Forestville and members from all around the Northern Chautauqua County area, held their fourth annual community service project: collecting money for the Forestville Food Pantry.

The youth, undaunted by the weather, stood outside of three Forestville businesses with Santa hats on, sleigh bells, a please donate sign, a donation container, and with their best smiles for two hours on two different days and asked the patrons entering the business to help the needy in the community.

In addition to the monetary collection, the club also arranged with the Forestville Elementary School, during the first two weeks of December, to collect donations of food, toys, and clothing for the Forestville Food Pantry. The students, faculty, and staff were asked to bring a donation to school and place it under the Christmas tree in the main corridor. 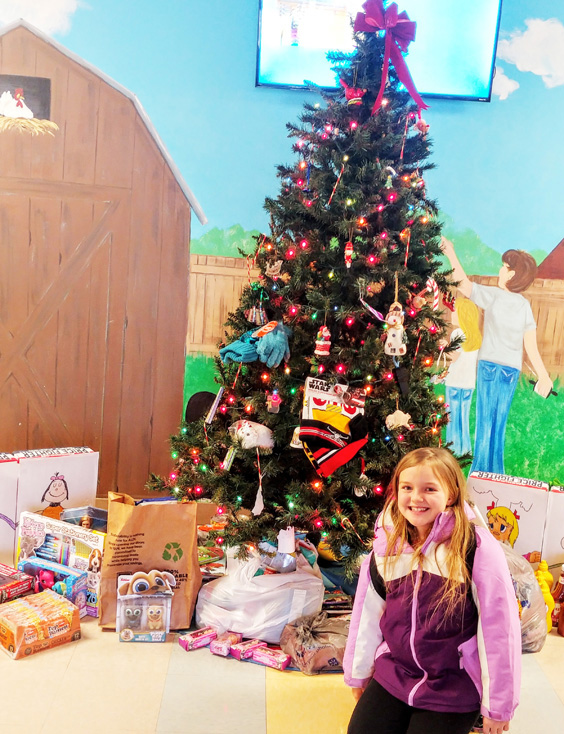 Awnna Aldinger at Forestville school with donations of gifts.

The finale of this community service project is when the club presents the Forestville Food Pantry a check for the amount collected and at the clubs recent Christmas party, the 4-H club president, Jesse Morse, and all the club members, handed Lorraine Hodkin from the Forestville Food Pantry, the check for $502. It is a wonderful statement of love and generosity from the community and one of the favorite community service projects that the club members enjoy doing year after year!

The 4-H Youth Development Program is one of many programs offered by Cornell Cooperative Extension of Chautauqua County (CCE-Chautauqua). CCE-Chautauqua is a community based educational organization, affiliated with Cornell University, Chautauqua County government, the State University of New York system, and the federal government through the United States Department of Agriculture’s National Institute of Food and Agriculture. For more information, call 664-9502 or visit our website at www.cce.cornell.edu/chautauqua. Cornell University Cooperative Extension provides equal program and employment opportunities.