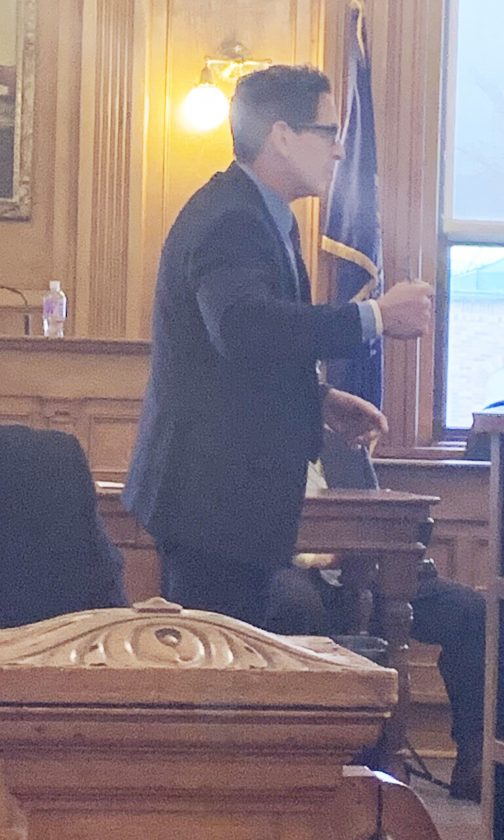 Thursday’s session opened with brief testimony by Lopez’s sister, Tatyana. As reported on Wednesday, Tatyana’s statement was in question as Chautauqua County Judge David Foley said that the witness would not prove recklessness, citing that to prove self defense, which is the route the defense is taking, defense attorney Jason Schmidt has to prove that what Lopez did was what an “objective, reasonable person in that situation would do.”

Following the discussion, Foley ruled that he would review Tatyana’s statement in chambers and decide if it is pertinent to the defense’s case and worth the jury’s time before she is allowed to take the stand. As it turned out, her testimony was at first not considered relevant as the prior altercations that Tatyana was going to be sharing were considered isolated or “remote incidents,” meaning they had no other evidence or witnesses to back them up.

It was only after Ashleyanne Lopez-Lopez took the stand Wednesday that corroboration was founded and Tatyana was then allowed to share her story. However, the only incidents that she could testify on were ones in the parking lot near CVS in Dunkirk and then at Tatyana’s house later, as she was not privy to the other two episodes that Lopez shared.

Ashleyanne Lopez-Lopez, 26, is charged with second-degree manslaughter in the stabbing death of Jefrena Brown, a 15-year-old high school student from Dunkirk. During summations, defense attorney Schmidt stated that there was “more than one story.”

“Nobody forgets that there’s a tragic loss here,” Schmidt stated to the jury. “This case is going to affect everyone’s lives, whether she (Lopez) acted justifiably and was just an interloper that got involved.”

Schmidt then went through the prosecution’s evidence piece-by-piece, attempting to discredit certain witnesses and pointing out that Lopez had the knife at her side up until the flailing blows.

He cited that Lopez had been pushed to this, asking the jury “what decisions do we make when confronted by the bully in the school yard?”

District Attorney Patrick Swanson had a different take on the events.

“She knew exactly what she was doing,” Swanson began, citing the fact that in his case and from reports submitted, she pulled the knife from her bra, it wasn’t found on the ground. “She wasn’t ready to leave the fight, she wants to make a point, she’s in charge and she’s ready and willing to prove it.”

He then added that she knew a knife could kill and pulled it anyway on Brown, who was unarmed.

“She saw friends, she stood with them on the street and watched the fight,” Swanson continued. “If she was that concerned, she would have taken out her phone and called the police and went home. None of what she did was consistent with wanting to go home.”

After Foley explained the laws and rules to the jury, they headed into deliberations until 6 p.m. but were not yet ready to cast a verdict.

Deliberations will continue today at 9:30 a.m. at the Chautauqua County Court House.