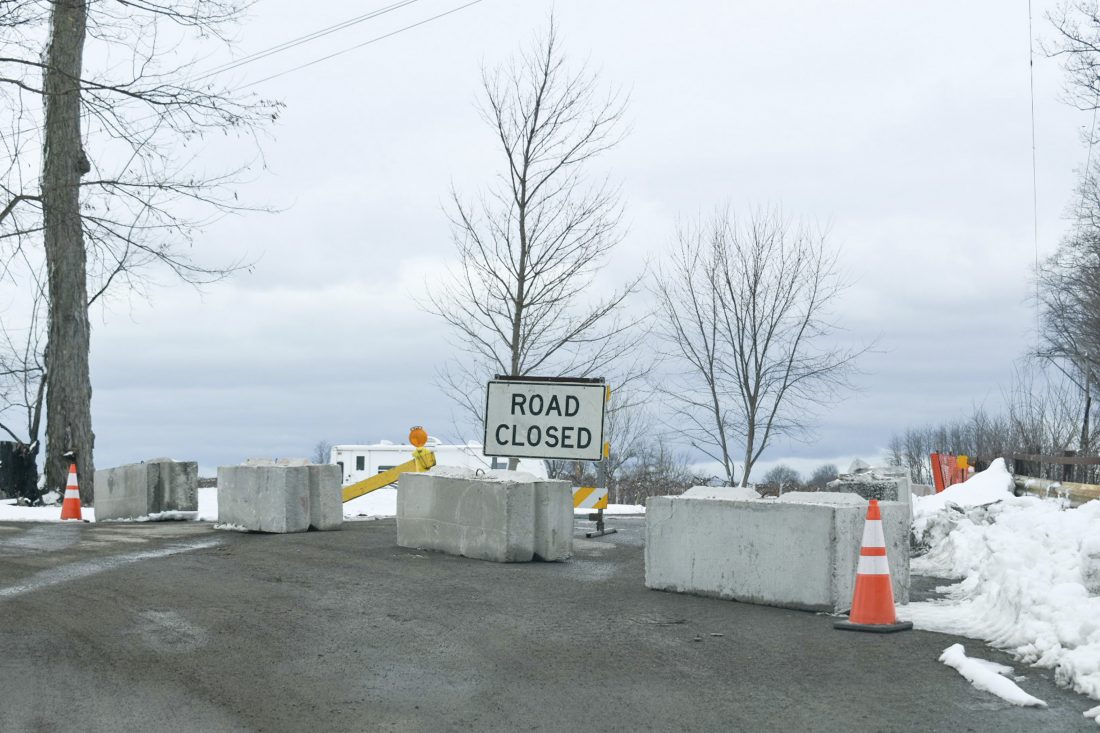 At the corner of Kuhrt Road and Mixer Road is where the dangerous portion is, lined with multiple barriers and signs. OBSERVER Photo by Natasha Matteliano.

FORESTVILLE — A portion of Mixer Road in Forestville will be closed until further notice.

There was a special meeting called this week for the town of Hanover to discuss the emergency closure of Mixer Road in Forestville. The road is being closed due to the loss of the bank on Mixer Road from Walnut Creek. This is making it a very dangerous situation.

Highway Superintendent Peter Pelletter explained to the board that the department closed the road down as soon as they found the issue had progressed since last year. Pelletter also believes that there is water coming from under the road as well, eroding the bank even more. “Now all the dirt is gone and literally a small car could fit between the guard rail and the road,” he said.

The board then discussed resolutions for the road. Pelletter said he considered putting some gravel in, building the road back up temporarily, but was advised that that would not fix the issue. The advisor said that the only way to fix the road properly was to dig it all the way down to the shale, build it back up, put drainage in and possibly move the road over as far as possible. The whole section of the road will need to be redone. Pelletter says that the advisor is confident there is grant money to pay for this issue and it will be cheaper if the advisor does the job himself.

“The problem is,” said Pelletter, “by the time we get the grant money, we are looking at next year.”

Pelletter considered and proposed a one-lane road to the board, but Louis Pelletter, Deputy Supervisor, said “I think when you go from a one-lane to a two-lane road, you have to have some special equipment to do that.” The board then tossed around the idea of borrowing a light from the county, but figured that would not be an option. They discussed renting a light, but ultimately came to the decision that it was not cost-effective.

The topic of safety then came up, making the board weary of even letting cars pass by the dangerous portion of the road. The board ultimately decided to leave the road closed until the situation can be fixed and be sure that everybody stays safe.