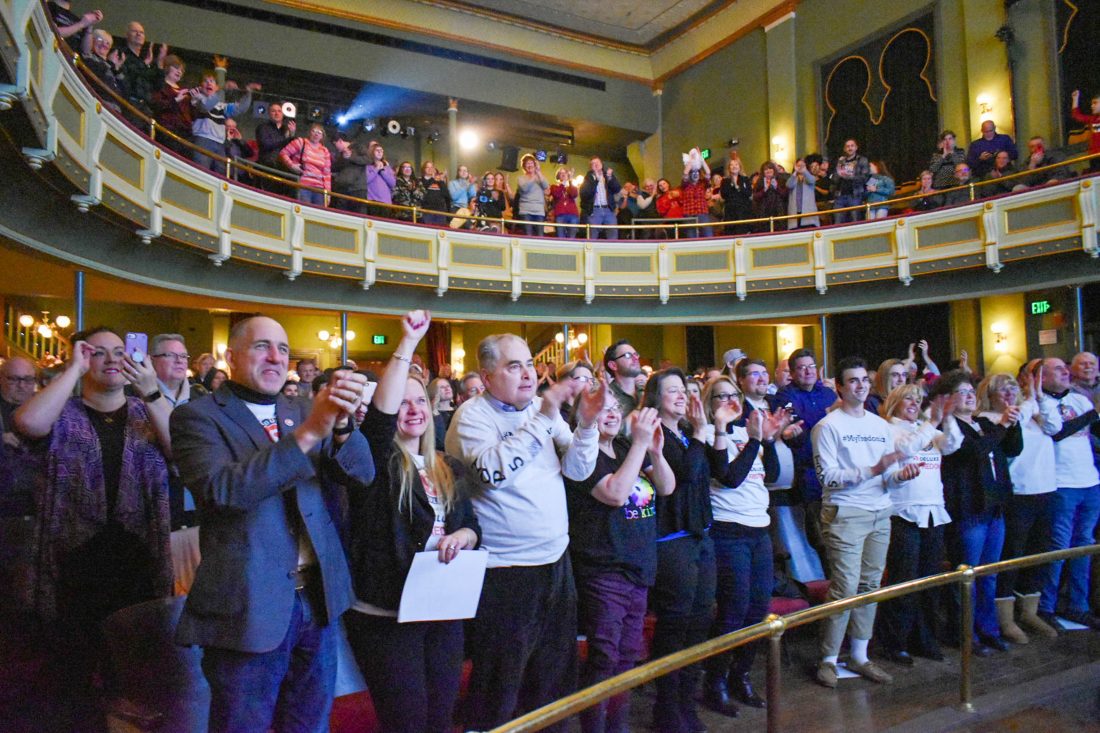 The Fredonia Opera House crowd erupted Tuesday night after finding out Fredonia was the winner of the “Small Business Revolution” Season 5 competition.

Fredonia was announced as winner of the “Small Business Revolution” competition, winning $500,000 to revitalize seven businesses in the community.

With America voting on the top five towns, Fredonia was the top town throughout the whole week given to vote, according to “SBR” on its Facebook page. They posted three updates during the voting week, Fredonia coming out on top for every one.

On their last update they wrote, “Keep those votes rolling in — a lot could change with 24 hours left on the clock.” Thanks to the support of neighboring towns, villages, all of New York State, the United States and even other countries, Fredonia kept their lead and won.

On one of the slides at the Opera House that played as people were taking their seats for a rally built around the announcement, it stated that there was support from six other countries, including the UK, Italy, Germany, Canada, Thailand and Japan. The slide also stated that on social media, there was an estimated 381,000 people reached, which is 38 times the population of Fredonia itself.

“Everyone has really come together in a way that I think is completely unprecedented,” said Grace Czechowski, who originally nominated Fredonia for “SBR.” “Not just in this town, but across the country and is a true testament to our community here in Fredonia. … I even have friends in Australia watching tonight.” 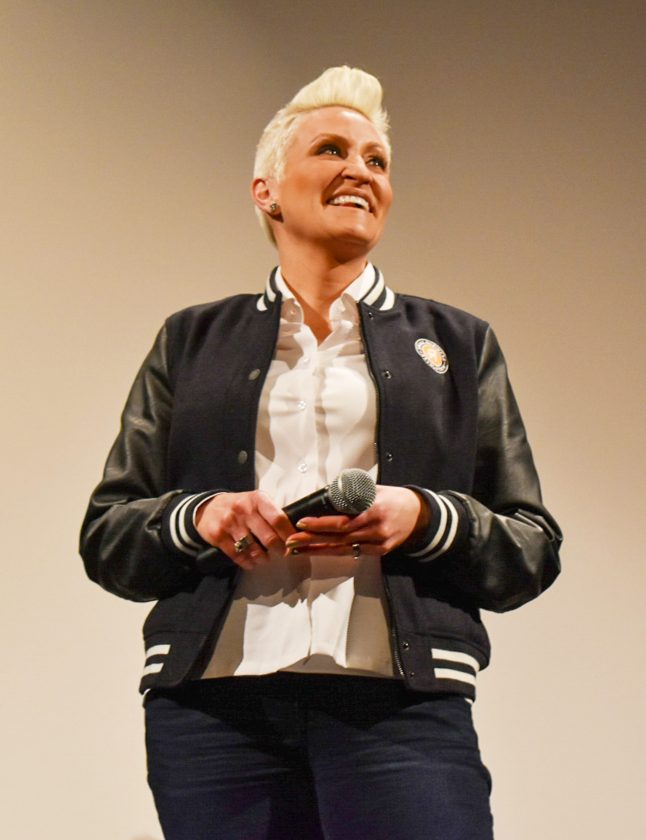 “Small Business Revolution” host Amanda Brinkman stands, happily waiting for the crowd to simmer down after the announcement of Fredonia’s victory.

The Opera House filled up very quickly, within ten minutes they had to close the doors. Outside the Opera House, about 200 more people came to watch the livestream of the announcement and also a live feed of what was going on inside.

Rich Ryan and Czechowski were the co-hosts of the rally, getting the whole crowd riled up and ready to welcome the news, win or loss. They took the time to thank all of the sponsors of the past few weeks, including lots of businesses and people from around the community.

“This has been a super humbling experience,” said Czechowski. “This has just been absolutely wonderful. I’ve loved being able to work with people in the community, the business owners, the Chamber of Commerce, the news outlets and the Comedy Center.”

Czechowski then announced a bit of sad news, that a small business owner in the area had an unfortunate accident that resulted in a traumatic brain injury. “Jeremy Dolce is a wonderful father, husband and local business owner here in the community,” said Czechowski. “This entire initiative has really brought the community together and shown how we can support each other.” They then sent around baskets to collect donations for medical bills for Dolce and his family.

“If we win this thing or not, we’ve already won this,” said Ryan, taking the stage. “I can’t be more proud to be a part of this.” Ryan thanked the small business for all the donations for the prizes that were made available to people who voted for the village.

Fredonia Mayor Doug Essek then took the stage, joined by Daniel Pacos, Supervisor of the town of Pomfret. “We want to thank each of you for the support you have given to Fredonia over the past two months,” said Essek. “This experience, win or lose, has shined a spotlight on Fredonia and our surrounding communities.”

Pacos offered his thanks to everybody as well, highlighting the process through which the word spread. Essek asked the town of Pomfret to join in, then Chautauqua County got involved, then the different schools became involved which spread the message throughout the whole state.

A video was then played, featuring clips from news stations around the area, the top 10 and top five announcement from Ty Pennington and Amanda Brinkman, hosts of the Small Business Revolution show and pictures of Fredonia and the small businesses in the community.

Another short video was then played, featuring a resident from Waseca, Minnesota. Waseca was a top 10 town in the competition, not making it into the top five. The town in Minnesota recently had a tragedy occur, the falling of police officer Arik Matson. Fredonia reached out to Waseca and offered their support for their loss. “I just wanted to say thank you so much to your community,” said the representative from the allied town, “Good luck in the Small Business Revolution.”

Precisely at 8 p.m., Amanda Brinkman came on the screen in the Opera House, giving a speech about how small businesses make up America and how they make small communities special. “Last October, we received thousands of nominations of towns who are passionate about their small businesses,” said Brinkman in the video. “From there, we narrowed it down to the top 10 towns.” She then announced the top five towns again that made the cut.

“I am so excited to declare the winner of the Small Business Revolution season five is…” said Brinkman on the video. Then Brinkman herself ran out on stage yelling, “Fredonia, New York!”

The crowd erupted in cheers and screams of happiness, a lot of the building getting emotional and even crying. The crowd cheered for about three minutes straight, Brinkman just watching the crowd with a smile on her face.

“You guys have incredible entrepreneurs in this community,” said Brinkman, finally able to get a word in. “It was so rewarding to see so many people come forward. … We never need to invent the heart of a community. We never need to create the spark. We may add some fuel to that flame, but it is you who did this for Fredonia.”

“Everything from Grace’s original application and passionate words about Fredonia,” said Brinkman. “To the hospitality everyone showed Erica and Julie when they came to visit, to the songs you’ve created, the tattoos you’ve created.”

Brinkman finished the rally off, saying “I bet everyone is curious as to what happens next, other than the big party that will ensue following this. We will be opening up the applications for small businesses to apply to actually be on season five.”

After the rally, there was music outside, a street party and a pub crawl held in the village to continue the excitement.

“Small Business Revolution” host Amanda Brinkman stands, happily waiting for the crowd to simmer down after the announcement of Fredonia’s victory.

The Fredonia Opera House crowd erupted Tuesday night after finding out Fredonia was the winner of the “Small Business Revolution” Season 5 competition.