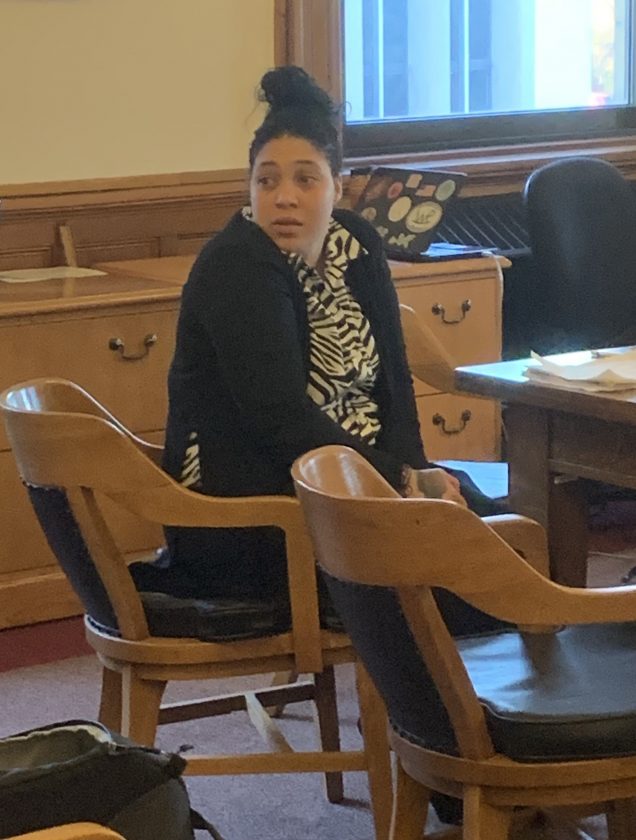 OBSERVER Photo by Jo Ward Ashleyanne Lopez-Lopez took the stand to give testimony in her defense on the third day of her trial for second-degree manslaughter Wednesday.

MAYVILLE – The defense began calling their witnesses on Wednesday with Ashleyanne Lopez-Lopez, 26, taking the stand. Lopez is charged with second-degree manslaughter in the death of 15-year old Jefrena Brown, who died on May 16, the day after a fatal stabbing.

Defense attorney Jason Schmidt began his questioning with what happened on May 15 at around 3:30 p.m. According to Lopez she had gone down the street to view an apartment for rent just a couple of doors down, at the time she was living with family and was looking to move into a place of her own. After looking the place over and discussing it with her potential land lord she noticed a young man bleeding in the street. After a few minutes another person arrived and a fight broke out with the young man and another individual. Lopez allegedly tried to stop the fight as the boy was already hurt, because of this the crowd purportedly turned on her and began yelling in English, which she doesn’t understand.

After a few moments Lopez went back to the sidewalk to return home telling people she “didn’t want any problems.” “I only wanted to go home to my kids,” Lopez stated through an interpreter.

Lopez then testified that earlier incidents stemming back over a year with three girls present at the fight is what led to her state of mind in pulling a knife on the crowd that day.

The first incident took place around February or March of 2018 in which Lopez, along with her sister, Tatyana, were heading to Tatyana’s house. It was soon after that they were allegedly accosted in a parking lot near the CVS in Dunkirk. Shouting ensued between the individuals who, according to Lopez, wanted to fight her. The pair then made it to the house where soon after the girls, including Doniesha Brown, Jefrena’s older sister, showed up. The girls came brandishing a kitchen knife, baseball bat and golf club and called out to the occupants of the house to come out and fight them. The police were called and the girls ran off dropping the club and knife.

The second incident, according to Lopez, took place at the Halas Hotel in August 2018. Again Lopez iterates that the same three girls were there and a knife was pulled on her following a brief argument. The third alleged incident took place at Mo’s Mini Mart on Fifth and Main Streets in Dunkirk in March of 2019. According to Lopez she was confronted by two of the girls, one being Doniesha Brown, and a new one she didn’t recognize. The three girls allegedly began bullying her and a fight broke out; Lopez claims that she saw Doniesha Brown with a knife tucked in her pants.

This all led up to the May 15 stabbing of Jefrena, where Lopez told the court that the three girls that had been bothering her were in the crowd that day and she feared for her life, especially after she claimed to have broke up the fight between the boys. Lopez claimed and video evidence showed Jefrena approach her from around a tree. At this time Lopez had picked up a discarded knife from the ground and told Jefrena to “stay back” and that she “didn’t want to hurt her.” Jefrena then punched Lopez in the face and two girls grabbed her from behind and pulled her hair. Lopez then stated that she flailed her arms wildly, resulting in a cut on her own arm and claimed to not realizing that she had stabbed Jefrena; Lopez then dropped the knife and ran off.

Lopez then headed out to Buffalo the following morning, but claimed that she contacted the Dunkirk Police Department at 8 a.m. that day, wanting to tell her version of events; the police ventured out to Buffalo where they questioned her. Lopez did cite in her testimony that parts of her statement weren’t written correctly, but that the statement was overall accurate.

Lopez did share with the court during cross examination by prosecutor and District Attorney Patrick Swanson, that she didn’t know Jefrena prior to that day.