Even at home, Democrats stuck in neutral 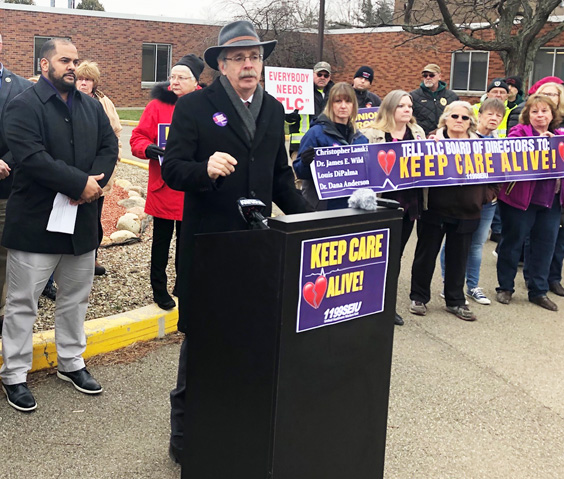 OBSERVER Photo Republican state Assemblyman Andrew Goodell of Bemus Point is in the middle of serving his fifth term.

Loyal Democrats across Chautauqua County and the nation are focused on one objective come November: remove Donald J. Trump from the office of United States president. That, especially at this point in time, appears more easily said than done.

Within the last 10 days, Trump has put together a solid State of the Union address and was acquitted of impeachment in the U.S. Senate. Since those two developments, he also continues a vindictive run of firing those who he believes have betrayed him while continuing to put fear into anyone who opposes his ideas.

For better or worse, his grasp of power continues to grow.

Democrats, on the other hand, continue to go through the motions. Instead of continuing to bang the drum over their obvious disdain for Trump, they need to be more than concerned by the chaos and confusion that continues in their party. The Iowa caucus was an embarrassment in execution and the New Hampshire primary won by Bernie Sanders appears to be a step back, not forward for the listless party.

Elected Republicans, no matter what their personal opinions are of a brusque and temperamental Trump, are riding a wave of confidence, especially in this region. According to the Chautauqua County Board of Elections, Republicans held a slim lead — by a 1% margin — in registration at this time last year when compared to the Dems.

Taking a closer look at the local government landscape, however, shows a very different trend. Major leadership roles at the county level are being dominated by the GOP, who have the county executive seat, 14 of a possible 19 legislators, the post of sheriff, clerk, Chautauqua County Court and Family Court judges. Even our state and federal leadership with Sen. George Borrello, Assemblyman Andrew Goodell and U.S. Rep. Tom Reed leans right.

Only District Attorney Patrick Swanson holds a county position as a Democrat.

Will anything change this year?

Residents tuned in to the local happenings should get some sort of idea soon as to what candidates are beginning to emerge in the campaigns for local and federal office that impact us on a local level. On Feb. 22, Democrats are expected to announce endorsements for the major races in a committee meeting in Mayville. Republicans, who are in command, only need to name one candidate.

Here’s how the field currently appears:

¯ County executive — Incumbent PJ Wendel was gifted this seat by 18 county legislators, not the voters. On the day Wendel was put into the post, county Democratic Chair Norman Green vowed to have a candidate to oppose Wendel. So far, no names have surfaced, but Michael Ferguson — who ran an excellent race against George Borrello in 2017 — has more name recognition than our current executive countywide.

¯ U.S. representative — Tracy Mitrano has been effectively campaigning since the 2018 race — and this year she does not have to challenge seven Democrats for the party nomination as she did last election. Over the summer, Mitrano lived in different areas of Chautauqua County and took on an active role in the community. It provided her with an excellent opportunity to learn about the region that is the farthest west in the district. Incumbent Reed has been a consistent Trump supporter, which will benefit him in this race that is filled with plenty of rural Republicans.

¯ State Assembly and Senate — Who will rise to the challenge against Goodell? Previous challengers, including Barrie Yochim, Jason Perdue and Judith Einach, have not disappointed when it came to their knowledge of the issues. But Goodell, a former county executive, seems to have won over this county with a folksy and realistic tone that often is not loud enough in Albany. In the Senate, there is no question this is Borrello country from here to Allegany and a portion of Livingston counties. He won big in a primary in June and in the election in November. Is there a candidate for sacrificial lamb?

¯ District attorney — Incumbent Patrick Swanson is likeable, but his trial record is a definite setback. Swanson, who has sided with the Republicans on the bail reform issue, has done an excellent job of remaining accountable to the public. However, his run for re-election will not be easy. Four years ago, he ran against Jason Schmidt for the position. Schmidt won a high-profile case last month in defending Ashleyanne Lopez-Lopez in a May stabbing death in the city of Dunkirk.

That is one of those cases that has not sat well with county residents as well as some law enforcement.