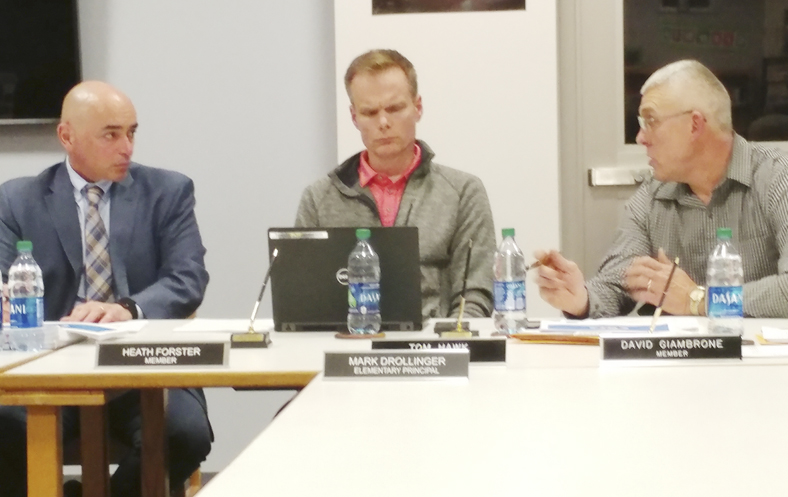 OBSERVER Photo by M.J. Stafford Fredonia Board of Education member Tom Hawk, right, speaks to District Superintendent Jeff Sortisio, left, during Tuesday’s board meeting. In the middle is board member Heath Forster.

The Fredonia Board of Education tabled some $57,011 in change orders this week intended to add to the district’s ongoing construction project.

Board member Tom Hawk said he was not against the spending but was not properly informed about it. Hawk asked to table it until the board’s Feb. 25 meeting so he could get more information, and his motion passed, 5-2. Board members Lisa Powell Fortna and Cristina Gegenschatz voted “no.”

District Superintendent Jeff Sortisio pushed back on Hawk’s contention that there wasn’t enough information released about the change orders. The orders would pay for the addition of new trophy cases in the high school lobby and some renovation of the Life Skills classroom.

“The change orders before you have been talked about and discussed,” he said, adding that they came up more than once in the Board of Education’s Facilities Committee.

Noting the Life Skills renovations were scheduled to start Monday, Sortisio said, “If these are tabled until next meeting, it’s my understanding that I should halt construction.”

Hawk was unmoved. “We haven’t really approved the restoration of the Life Skills room, is that correct?” he later asked Sortisio.

The superintendent disagreed. “I haven’t really seen a formal plan from a manager, an architect or yourself on how this is going to roll out,” Hawk replied.

Hawk called for clear financial information and the work scope of the change orders. Sortisio continued to insist that the Facilities Committee discussed the proposals, but acknowledged, “I should have included a schematic. I thought there was a better understanding than apparently there was.”

Hawk said he was not against spending money to help students. However, “I don’t feel like approving items I am unsure of,” he said.

Later in the meeting, Sortisio provided the board with a spreadsheet detailing items that the Facilities Committee reviewed to add to the project, along with some things that were considered but rejected. Added items include things such as new wall pads in the elementary school, new backstops at the baseball and softball fields and landscaping to discourage motorists from driving down the new pedestrian walkway near the tennis courts.

“I think one of the things I owe this board, at maybe the Feb. 25 meeting, is a list of the work that was done, both as part of the original project as well as the additional scope,” he said. “I think when we review that additional scope it will become clear why we have the number of change orders that we’ve had.”