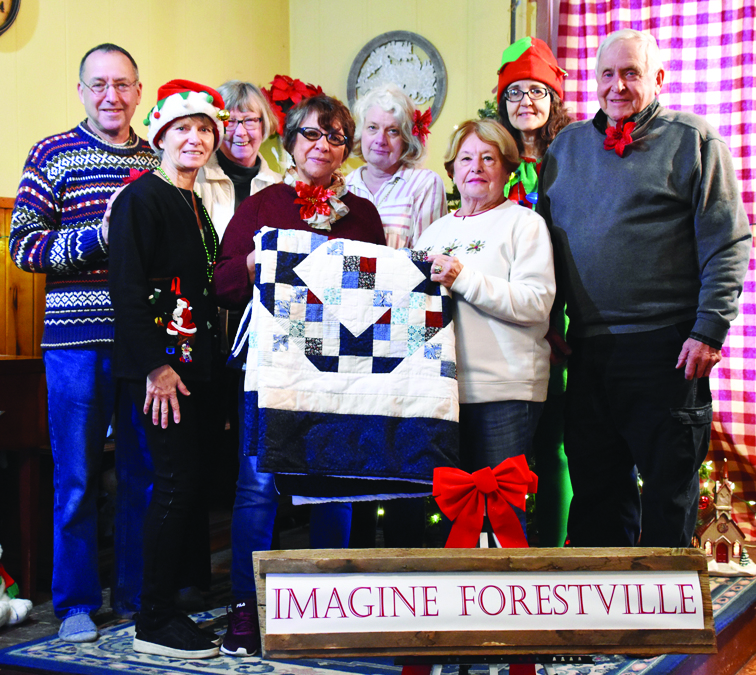 The group chose the Jacob’s Ladder pattern because it was popular for quilts from 1850 in 1940, a historic time of prosperity in Forestville.

And so began the new adventure of fund raising. It was a great journey, which led to Imagine Forestville participating in the Wonderful World of Women Expo sponsored by the OBSERVER, the Fall Festival in Forestville and, of course, its members selling tickets to friends and family.

The quilt raffle culminated at Imagine Forestville’s first Christmas dinner, held at the Forestville Meeting House on Dec. 19. Beth Benchley was the “Lucky Elf” who had the duty of pulling the winning ticket, which was purchased by Forestville resident Gloria Yeager.

“Imagine Forestville would like to Congratulate Gloria and thank Carmen for sharing her talent so generously, and all those who purchased a raffle ticket or two!” said group spokeswoman Aimee Rogers.

The total raised was $1,030. The funds will help with the many projects Imagine Forestville has initiated for the benefit of the community, such as working toward establishing a National Historic District and a Local Historic District, creating a scenic walking trail, distributing “Welcome to Forestville” baskets, participating in BLOOM 2020, conducting church tours during the Fall Festival, and many new projects to come in 2020.