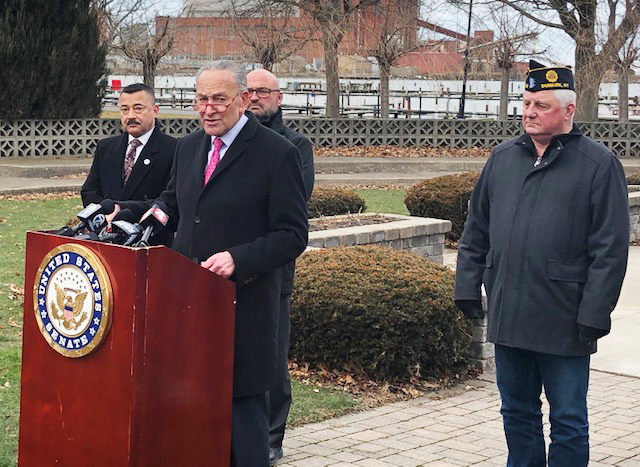 Standing at Memorial Park in Dunkirk, flanked by Vietnam-era veterans as well as those from other wars, U.S. Sen. Charles E. Schumer this morning called on the Office of Management and Budget and the Department of Veterans Affairs, to stop playing games with the health and well-being of upstate New York veterans, end the years-long dispute, and add new conditions to the Agent Orange presumptive conditions list.

Schumer announced a letter to OMB and the VA demanding a detailed explanation as to why the agencies continue to block billions in health care coverage and benefits for thousands of Vietnam veterans. A 2016 National Academies report found suggestive evidence that bladder cancer and hypothyroidism were associated with veterans’ service, as well as clarified that veterans with “Parkinson-like symptoms” should be considered eligible under the presumption that Parkinson’s disease and the veterans’ service are connected.

Following this report, former VA Secretary David Shulkin announced that he would be adding the three conditions to the Agent Orange presumptive conditions list in the near future-which would allow Vietnam War-era personnel stricken with these illnesses to receive health care benefits, but that announcement never came.

Diagnoses of hypertension among Vietnam War-era veterans have also been linked to Agent Orange exposure. Even though Schumer secured a provision in the recently passed budget deal requiring OMB and the VA to issue a detailed report to Congress on the delay in adding these conditions to the presumptive conditions list, the report was woefully insufficient and both agencies have failed to properly explain why they are denying these veterans.