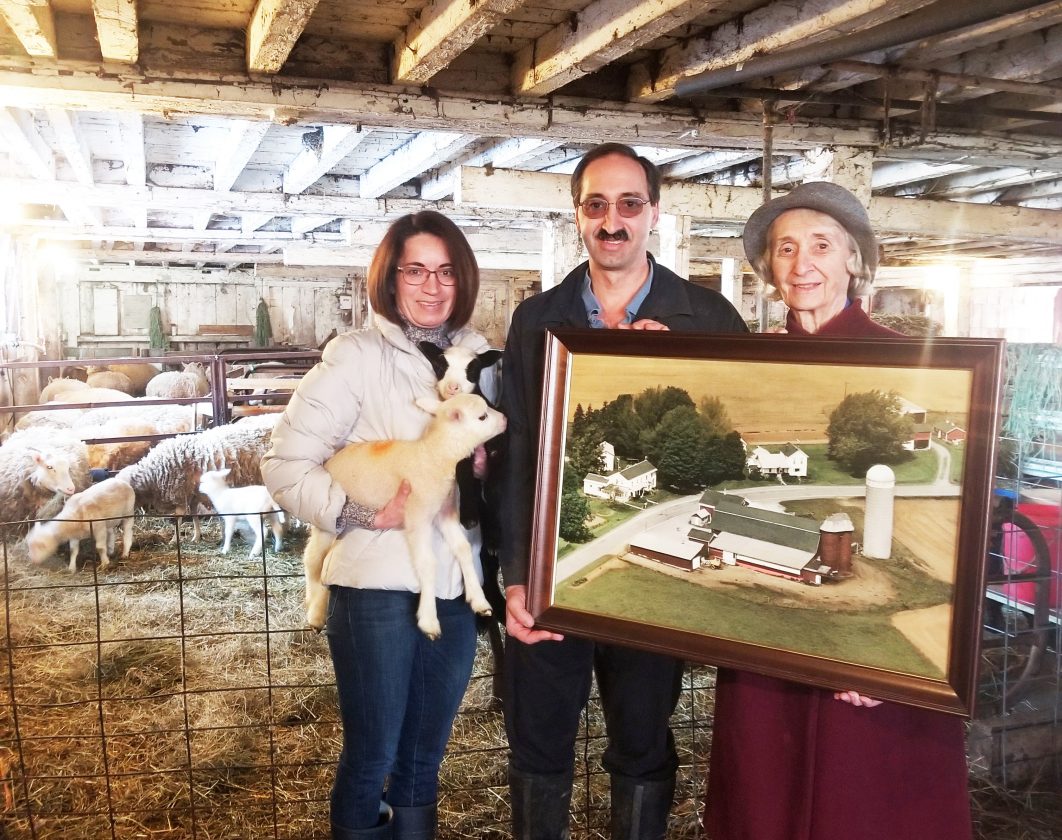 From right are Ann, Mark and Martha Woolley with a photo of the farm.

ARKWRIGHT — The Woolley family of Forestville have owned and operated the family farm from 1845 to current.

The farm is currently owned by the Woolley Family and operated by the sixth generation, their son and daughter-in-law Mark and Ann Woolley and is referred to as Arkwright Summit Sheep Farm.

Since the farm has been in the family, it has operated mainly as a dairy farm and was known as Mapl-Camp Farm until 1998, when the milking operation stopped. During the farm’s operation it has also produced many other products including maple syrup, honey, wool, Eggs and Meat (pork, chicken and lamb).

The main pond on the farm, known as Black’s Pond hosted the first Girl Scout Camp in Chautauqua County before a designated one was actually built. Longer ago, Black’s Pond used to be an area for people to gather to go swimming, have row boat races and picnics. From the 1932 to 1957, there were 2,500 visitors, not including swimmers, ice skaters and sightseers. We have records of people visiting the pond from as far away as San Bernardino, California.

During the time that Arthur Black owned the farm, it was the first farm in the town of Arkwright to have electric, around 1930. According to The Annals of Southwestern New York, Volume III, published in 1940 “this farm which is electrically equipped throughout, is cited as the model farm of the local electric company.”

Also, according to the same publication, “In 1905, Mr. Black purchased the first automobile to be owned in the town of Arkwright.” It also is one of the few farms in the United States to have three 40-foot clay tile silos under one roof. They were built in the early 1900s using wooden scaffolding and are still standing today. With the way the curve in the road is, you can only see two silos at a time from either direction. It’s only from behind the barn that you can see all three.

At one time, the farm was 650 acres it is currently approximately 500 acres with about 200 acres of woods. The woods are on a maintenance logging program to promote proper growth and at one time had the largest stand of virgin timber in Chautauqua County. Over the years it has had natural gas wells to help supply the area and a Brine Well, which was used to treat the roads in the winter time.

There is an abandoned cemetery located on the farm which has a drummer boy from the Civil War buried in it. After this, is when the Arkwright Summit Cemetery was opened on the farm along Farrington Road, which is still a public cemetery and currently operating. Our family still carries on the tradition of placing an American Flag on the grave of the drummer boy in the abandoned cemetery every year.

Nicholas Black built the two-story white house, which was originally three stories, at the corner of Farrington Road Route 83 as a dowry to Mr. Abbey to prove he could provide for his daughter. This is the corner known as “Black’s Corners.” Arthur Black, his son, was also a justice of the peace for the town of Arkwright and held court in of the outbuildings on the farm. He was also a taxidermist, an apiarist with approximately 75 hives and a woodcrafter, turning many desk lamps, floor lamps & pencil holders out of wood.

Over time, the farm incorporated raising sheep so the price of wool would pay the taxes. In 1967, Jared Woolley added a “Herringbone Double 4” milking parlor onto the barn. This allowed him to milk four cows at a time on each side of the parlor, reducing the amount of time to milk the herd. The herd size typically averaged 70 head of cattle, mainly Jerseys and milked twice a day. At that time, there were also approximately 100 head of sheep in the flock. The crops mainly grown on the farm were: hay, corn and oats. The equipment mainly used on the farm were Allis-Chalmers tractors and New Holland equipment and the farm was one of the few in the area that had enough buildings to store all of the equipment inside for winter.

Having the farm located on such a tight curve has presented many challenges over the years. Not only with getting equipment in and out but, when the milking herd would be brought across the road from the pasture to the barn and back twice a day to get milked. We would put out traffic cones and have people stand in the road to stop traffic and there would still be times drivers weren’t paying attention and the cows almost got hit.

For many years, people would quite often see Alfreda Woolley sitting in her living room window crocheting afghans and waving to everyone that drove by. She was also one of the first entry clerks for the Chautauqua County Fair in Dunkirk. The Woolley family has exhibited both dairy and sheep at the fair over the years, with the sheep being their main exhibit. Jared and Martha have been very active with the Chautauqua County 4-H Sheep Project and so are Mark and Ann. Mark and Ann still exhibit sheep at the fair and they have a flock of around 30 ewes.

In memory of his father, barn 3 at the fairgrounds has been named The Jared Woolley Sheep Barn. The farm still continues to sell lamb and raise it’s own hay, making both the standard square bales & a custom size 3- by 5-foot round bale, which are easier to maneuver by hand inside the barn.

I remember growing up on the farm and one nice thing as a kid was, the closest neighbor in one direction was a quarter-mile and the other direction was a half-mile and we owned all the property in between. I also remember during the Blizzard of ’77 we had to maintain Farrington Road from the main farm on the curve down to Route 83 for two reasons. The first reason was, we had animals at the barn on Route 83 that had to be fed and attended to and the second reason was, we had to be able to get the milk truck up to the farm every other day to load up our milk and haul it away.