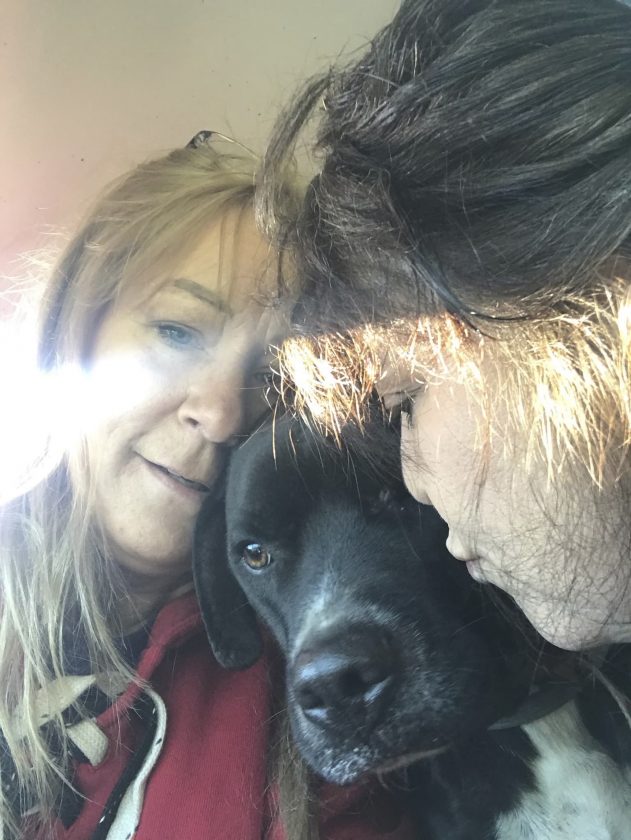 Joelle Stanton and Mary Beth McElligott pose with Conan after getting him safely back in their care. Submitted Photo.

ALLEGANY — T&M WNY Lost Pet Rescue, Search, and Trap, a volunteer rescue service out of West Seneca, put their skills to work on a hard case in Allegany State Park. A dog lost for 10 days was tracked and trapped by the duo, Mary Beth McElligott and Joelle Stanton.

“I just want them to give some recognition,” said Cynthia Furman of Brocton, the owner of the lost dog. On May 3, Furman went to Allegany State Park with her family to meet other relatives. Furman also brought her dog along, which is a pitbull and lab mix named Conan.

Unfortunately, Conan got loose when Furman’s nephew was walking him, with a leash attached to the harness he was wearing. Conan ended up being lost for 10 days, with multiple sightings on different days, but nobody, even Furman, could get close to him without him running away.

The police even tried to catch him, but did not succeed. Furman ended up calling in T&M WNY Lost Pet Rescue, Search, and Trap to help track down and trap Conan once and for all.

“We estimated him to have run at least 20-30 miles in the 10 days he was missing,” said Stanton. “I’ve never seen a dog run like that before.”

Conan went into what is often called “survival mode” by trappers. He would not go near any humans, even when baited with food. Conan ended up losing 20 pounds in the 10 days he was missing, according to Stanton.

At one point, Conan was running along Route 86, which is a very busy highway. Furman thought she was going to lose him at that point. “My heart was breaking,” said Furman. Fortunately, he ended up running back towards the boat house where he was originally lost, which is when Stanton and McElligot set up a trap and this time, Conan went into it.

He has been home safe ever since, and has gained back some weight. “It was a long 10 days,” said Furman.