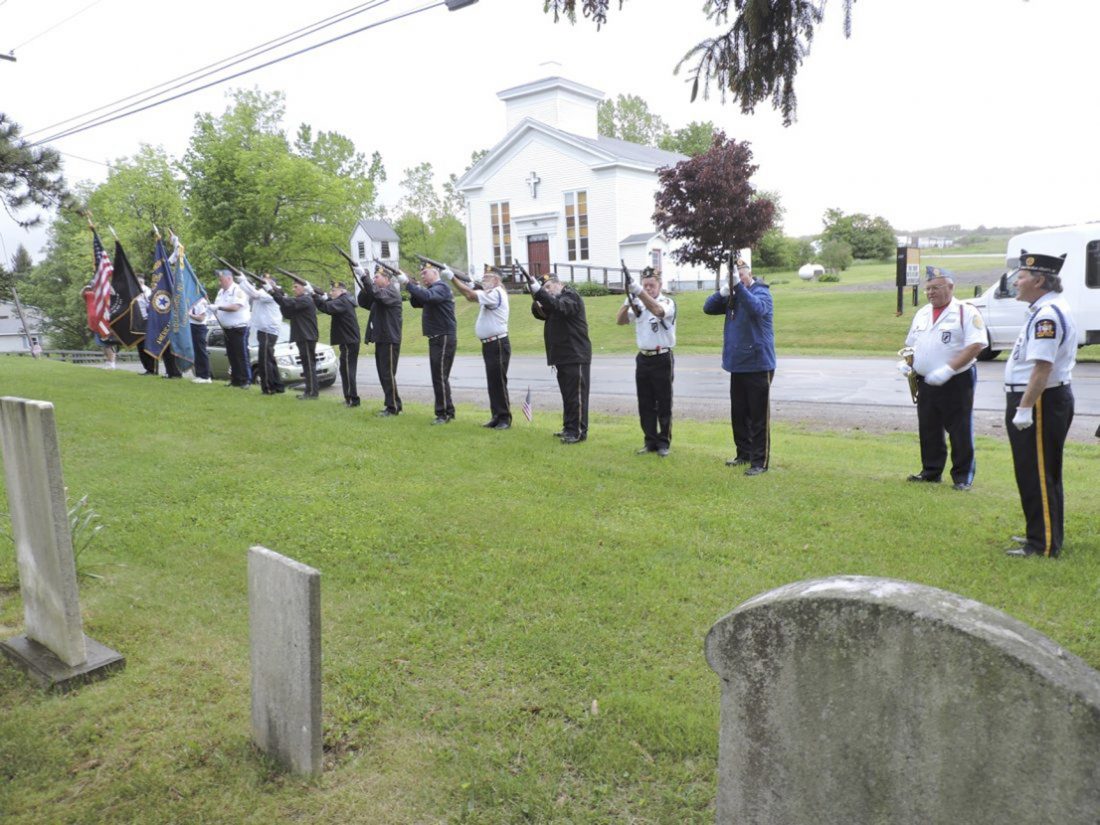 Members of the Cassadaga American Legion Post 1280 Honor Guard are pictured in May 2017. The group plans to visit about a dozen cemeteries Monday, while practicing social distancing, to recognize those who lost their lives. Submitted Photo.

For years, the group has visited about a dozen cemeteries in the Cassadaga Valley area each Memorial Day to honor military personnel who died while serving in the United States Armed Forces. This year will be no different, though Karl Lawson, local Honor Guard chairman, said members will stand about two arm’s lengths apart (roughly 6 feet) at each cemetery in addition to wearing face masks.

Despite the coronavirus pandemic, which has altered life across the globe and ground the economy to a halt, Lawson said there was never a discussion on canceling this year’s Memorial Day tribute.

“We’re going to be doing what we always do, which is get the guys together,” he said. “The guys will be wearing masks. Normally we stand one arm’s length apart, which is about 2-3 feet. This year will be two arm’s lengths. We will still be practicing social distancing.”

At each stop, Lawson said members will get out of their vehicles and line up. A prayer will be said in addition to a brief history of the holiday before a 21-gun salute is performed.

“I have said from the get-go, one thing we will be doing is honoring our deceased,” said Lawson, a veteran of the U.S. Air Force who served from 1964 to 1968 during the Vietnam area. “It’s to honor those who have served in the U.S. military, especially for those who gave their lives for this country, and to me and the rest of us it’s very important.”

The yearly tribute has been going on since the late 1980s.

Meanwhile, Gov. Andrew Cuomo said Tuesday that the state will allow Memorial Day ceremonies despite statewide lockdown rules. Ceremonies marking the Monday holiday with 10 or fewer people will be allowed by the state, but at the discretion of local governments, Cuomo said.

Nonessential gatherings have been barred in New York since March, but the governor said honoring the sacrifices of military members is an “important tradition.”

Localities can also stage vehicle parades, which have become more popular during the pandemic.

Cuomo didn’t immediately explain details of what types of ceremonies or events might qualify for the exemption.

New York officials have been gradually relaxing lockdown rules as COVID-19-related hospitalizations and deaths decline. There are an average of 335 new hospitals admissions a day.

The pandemic has forced many local municipalities and organizations to cancel Memorial Day activities.

The village of Falconer, along with the Henry Mosher American Legion Post 638, recently canceled its annual Memorial Day parade. “The safety of our residents is of the utmost importance,” the village said in a statement. “As a display of honor and remembrance to the men and women lost while in military service for the United States, we encourage our entire community to decorate their homes and businesses with American flags, large and small.

The Associated Press contributed to this story.