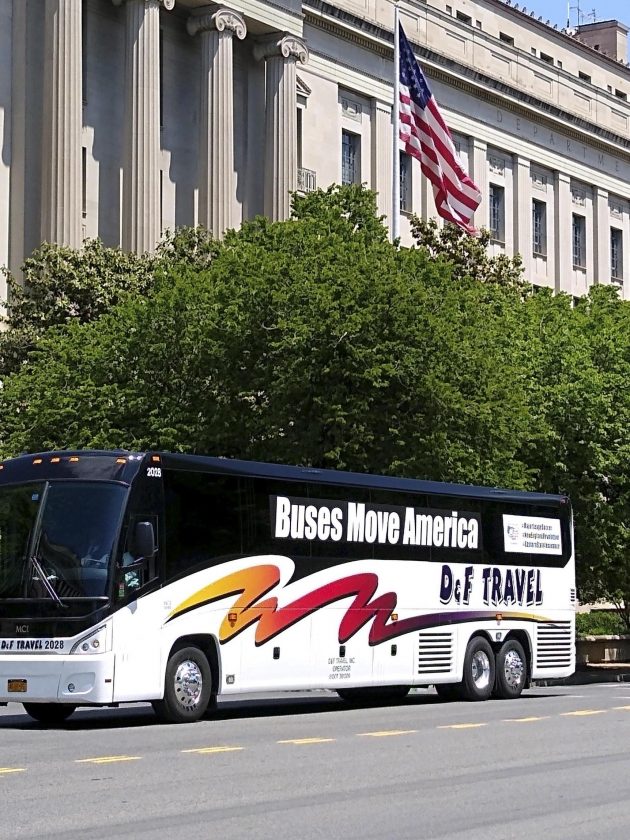 The owners of D&F Travel visited Washington, D.C. to discuss the needs in the motorcoach industry. Submitted Photo.

Two buses from D&F Travel, motorcoach company, attended a rally last week. The rally included an eight mile long line of buses all in the nation’s capital, rallying for support from Congress.

The purpose of the rally was to demonstrate that the motorcoach industry needs help. The bus industry, for public purposes, has come to a screeching halt because of the pandemic, leaving businesses to cover all costs with no income.

The motorcoach industry transports about 600 million passengers annually, making it one of the largest transportation industries in the United States, yet they’ve seemed to have been forgotten about by Congress.

“We don’t want to make it just about us, but we feel like we’re being left behind here,” said Richard J. Swanson, operations manager. “We know that everyone is hurting but the bus industry has been left out of every bill so far, it’s just not fair.”

Motorcoach companies have been advised to apply for loans from the Small Business Administration (SBA), but some, according to Swanson, don’t feel great about taking the money away from actual small businesses, as D&F Travel is a large motorcoach company with 12 buses in total.

“My dad, he’s put in a lot of hard work, sweat, and money into this company. It’s hard to watch it suffer, we just want to keep our doors open,” said Swanson. “We’re fortunate enough to have them open for a little while, but if this keeps going on it’ll be tough to keep them open.” Swanson and his father have managed D&F Travel for years.

Bus companies as a whole, across all 50 states decided to come together on May 13, rallying for a movement from congress to support motorcoach companies. There were over 1,000 buses at the rally in total, two being from D&F Travel.

“Every single state was accounted for in the rally,” said Swanson. “Alaska drove their own bus down and Hawaii flew in and borrowed a bus to represent themselves. We (motorcoach companies) are all in this together, so I’m glad there was representation from every state.”

Congress has yet to respond to 30,000 letters from the motorcoach industry overall, according to Swanson. “We’re still out here with unanswered questions,” said Swanson. “We just don’t want to feel left out, that’s all.”