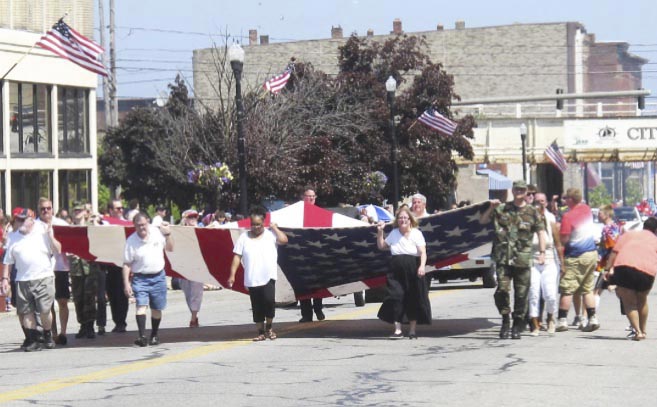 A tradition by Elks Club members and volunteers carrying the large U.S. flag will be missed this year, just like the city parade. OBSERVER Photo.

Dunkirk Mayor Wilfred Rosas did not take the decision lightly in late April. Canceling the Memorial Day services and parade would not be greeted with enthusiasm by anyone.

Normally the last Monday in May is when the summer season unofficially begins here. Thousands make their way to Central Avenue — from the city and around our region — to celebrate America and remember who gave their lives for our country.

This year, however, is very different. Gatherings, at a halt for so long, may be starting to slowly come back. Many businesses continue a struggle to stay afloat. There’s also little to no planning taking place for any annual event.

We’re moving forward while still in a waiting period. No one is quite sure how long it will last and just how it plays out.

Rosas, however, was the first in the region to take the drastic step of nixing the Memorial Day activities. Within the next week, more dominoes began to fall.

“The first two weeks of Music on the Pier will be canceled. The first Thursday in June we were going to start, but at this point I don’t think that is going to be a good idea to have it.

“We can’t control social distancing, therefore I don’t think it will be helpful in protecting against the spread of the virus,” Rosas said on April 30. “I know that there are people that wanted to have it, but this is a matter of public safety right now. We’re trying to prevent the spread of the virus. These events draw more people than we’ll be able to control with social distancing.”

America is in the great tug-of-war regarding the coronavirus. One side cannot reopen soon enough. Another is still not sure when to do it.

State Gov. Andrew Cuomo, politics aside, has tried to base the decisions on numbers and regions. That is not popular here since we have had 57 cases in Chautauqua County over two months as metropolitan and the suburban areas of Erie County have been among the hot spots for the virus.

Cuomo’s unpopular method has some validity. Most of the cases here are in the north-county sector, which is tied to the Buffalo region through jobs and the economy — much more than our neighbors from Jamestown.

Even the smaller towns of southern Erie County have triple the cases of the west, east and south quadrants as spotlighted on the Chautauqua County COVID-19 map, which total 18. The towns of Brant, Evans, North Collins and Collins have 58 cases.

Numbers aside, summer here is more than just about the fun. It’s an economic lifeline.

Dunkirk comes alive every Thursday night when music plays. Venues near the waterfront fill with friends. Its Fourth of July, which also has been nixed, is traditionally a traffic jam. Visitors are wall to wall from late afternoon to the fireworks.

Each happening is a little bit of magic after eight months of cabin fever.

This year, other entities have started slowly canceling events. On Tuesday, the Chautauqua County Fair took a pass. Earlier, Festival of Grapes organizers in Silver Creek shocked many when they canceled the September happening. Many thought it was far too soon to take that drastic step.

But anyone who has ever been part of organizing even a minor gathering or just a simple dinner party knows all details that go into planning. There’s no consolation to agonizing over hours, days, weeks and months and not having any event to show for it.

Our great outdoor season from late May to early September has always been one to relish. Just like everything else the last two months, this summer — in Dunkirk and across Western New York — will be like no other.