Some Memorial Day festivities will remain 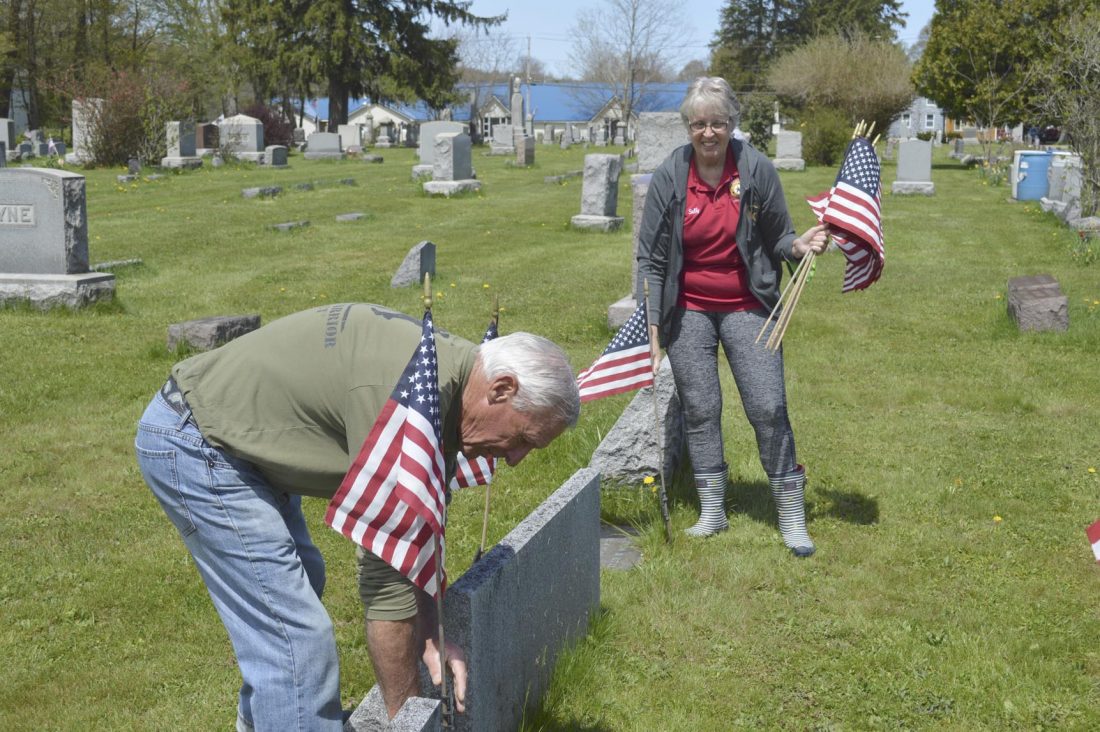 Nine representatives from the Cassadaga American Legion Post 1280 recently placed American Flags on the graves of veterans in the Cassadaga Cemetery, the Stockton Evergreen Cemetery and the Stockton Greenwood Cemetery. The volunteers walked around the cemeteries placing nearly 430 American Flags on the graves of the veterans. In the photograph are two of those who placed flags, Karl and Sally Lawson of Cassadaga. Submitted Photo.

Memorial Day is a day to honor and mourn the military personnel who have given their lives while serving in the United States Armed Forces. Some Memorial Day festivities will carry on, but most are canceled.

During one of his press conferences from this past week, Gov. Andrew M. Cuomo announced that the state will allow Memorial Day ceremonies of 10 people or less statewide, with final decisions about ceremonies being left to local governments. The governor also encouraged vehicle parades in honor of veterans for Memorial Day.

The following events for Memorial day have been announced a go from local governments:

To honor Memorial Day this year many areas are having a “Ring For Remembrance”. Angola leaders ask that any churches and venues in Erie County with bells or chimes to stand united and ring them at 9 a.m. on Memorial Day, with a moment of silence to follow.

Cassadaga Legion Post 1280 Memorial Day Honor Guard ceremonies will travel to 12 cemeteries to honor veterans. Full Military Honors will be performed at each stop. Public will be permitted to the ceremonies, but they recommend social distancing and masks. Each ceremony should last about 5 minutes. The approximate times and locations are as follows:

Cassadaga will also hold a Memorial Day Boat parade at 2 p.m. Boaters will assemble in the middle lake at 1:45 p.m. Spectator viewing areas include: Dale Drive, Park Avenue, Lakeview Avenue and portions of Maple Avenue. Boaters and spectators are encouraged to deck out in patriotic gear. A rain date is set for May 31. The boat parade is sponsored by the Cassadaga Lakes Association.

Dunkirk is having a private ceremony that will be livestreamed on the local spectrum 1301 channel and on YouTube. Throughout the day, the local channel will also be showing previous year parades as well.

The Chautauqua Mall is hosting a Memorial Day drive-in ceremony. The event starts at 1 p.m. Attendees are encouraged to bring their own flags and they will stay in their cars and tune in to 1240 AM or 101.3 FM as the Media One Group live-streams the ceremony. Ceremony features local dignitaries, Color Guard, Lakewood Fire Department’s ladder truck and flag, bagpiper, bugler and special guest speaker Chautauqua County Veteran’s Officer Major Greg Carlson. The location is at the Chautauqua Mall parking lot at the corner of Mall Boulevard and Fairmount Avenue (behind the former Ruby Tuesday location).

Abbreviated service in the Sheridan Center Cemetery, weather permitting. If it is raining, the Honor Guard and VFW will be in the community center, right next to town hall. The town encourages guests to maintain social distancing and if the ceremony is indoors they will limit the people in the building. Masks are necessary. This will take place at 11 a.m.

The following events have been officially cancelled due to the pandemic:

Angola parade and other ceremonies