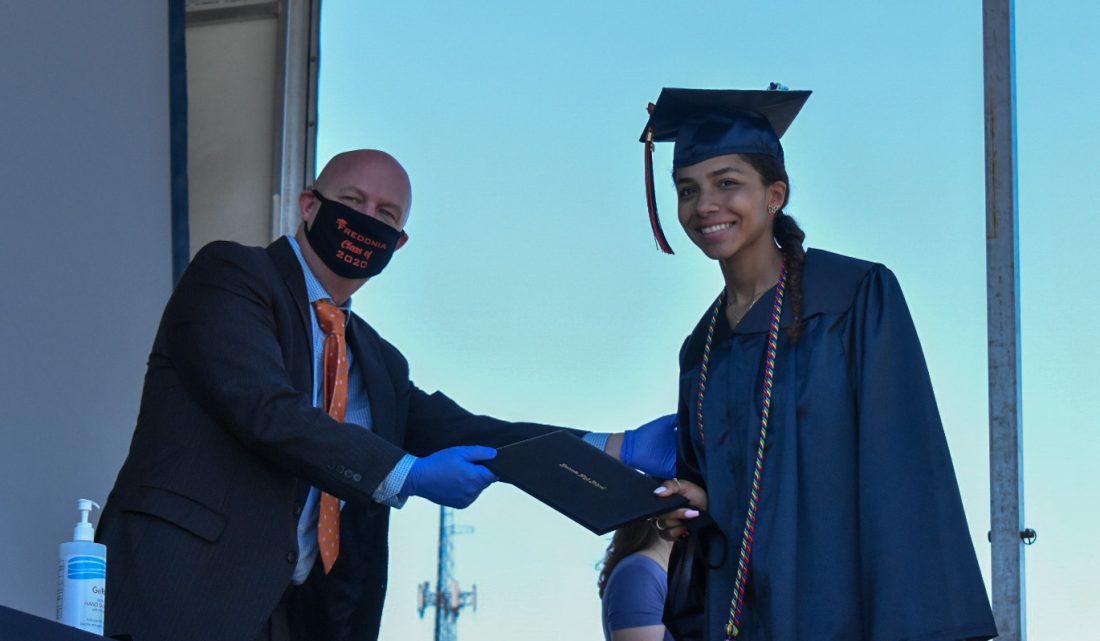 Fredonia’s class of 2020 persevered and overcame adversity, graduating with their high school diplomas on Sunday afternoon.

The ceremony was held at the Chautauqua County Fairgrounds, where a stage was set up, and chairs in front of it for the students. Families were behind the students in their cars, watching the event from afar. The event was also live streamed on the radio and Youtube.

Darrin Paschke, principal, said “This class has had to overcome several mountains. … Some of us tried to just speak or complain about our mountains, but the mountains were still there. Eventually, some of us decided to grab shovels, the mountain seemed to level out, and changed from ‘I’ to ‘we.'”

The Valedictorian, Alec Schrader, spoke in his speech of the many firsts, lasts, and losses that the class of 2020 has endured and experienced. He also spoke of how he hopes his class will change the world for the better, with hope for his and their futures.

“Although the end of our senior year wasn’t exactly a ball, we remain positive and hopeful through it all. … Right now, more than ever, we live in a nation full of hatred,” Schrader said. “Like MLK (Martin Luther King Jr.), I too have a dream. I have a dream that as fellow classmates, citizens and humans, we start to listen to each other again. I have a dream that the left doesn’t always fight with the right, that we don’t drown out color with white, and that as a class, we are not afraid to stand and fight, especially for what we believe to be right.” 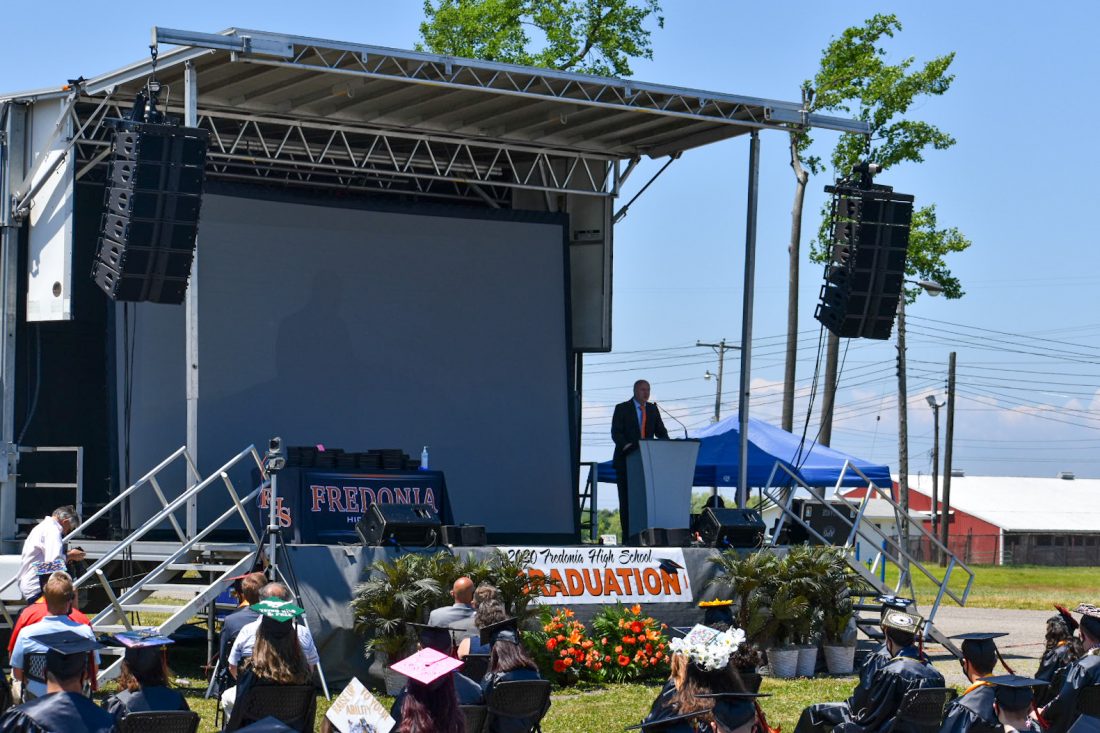 Amy Hontz, who previously taught History at Fredonia High school, was the guest speaker for the ceremony. She spoke of her adversities in her life, reminding the class of 2020 that no matter what adversities they may go through, they will always be able to overcome them. In December, Hontz endured two brain bleeds, which ultimately affected her speech, vision, memory, and ability to walk. She is on the journey to overcome her adversity thrown at her.

“In March, adversity became a huge part of your life, and became one of the greatest hurdles you have faced thus far,” Hontz said. “Problems, large and small, present themselves to you throughout your whole life. Accept it, it’s a fact of life. … Learning to contend with hard times that seem beyond your strength is what builds character and resilience.”

President of the Board of Education, Brian Aldrich, presented the students with their diplomas, alongside Paschke. Each graduate lined up and walked across the stage, completing their biggest achievement in their lives so far. Tested in all aspects and challenged greatly, the class of 2020 Fredonia graduates persevered and learned lessons from all that they have gone through not just in their senior year, but their whole lives. 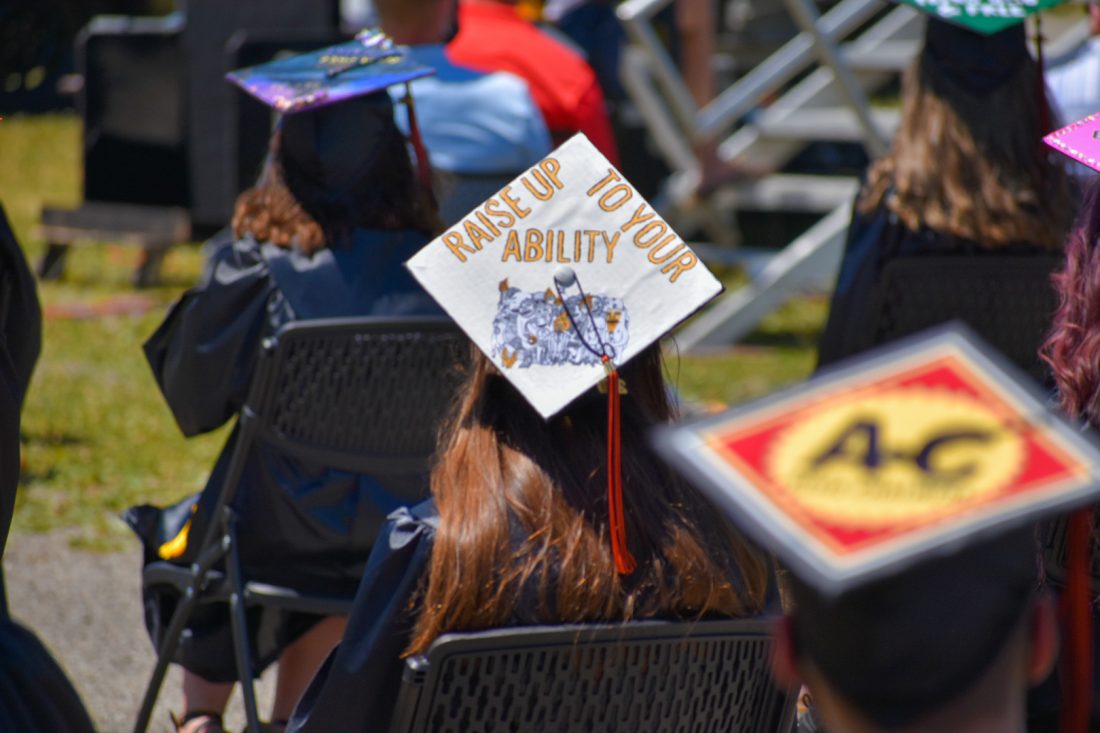 One of the many decorated graduation caps on Sunday. 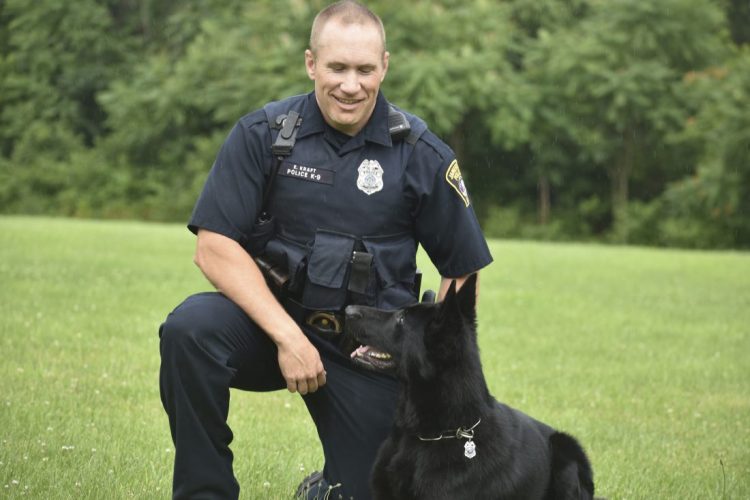 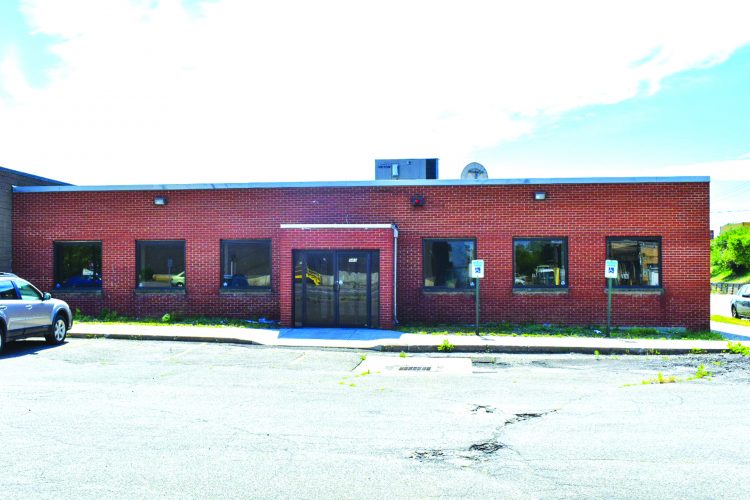