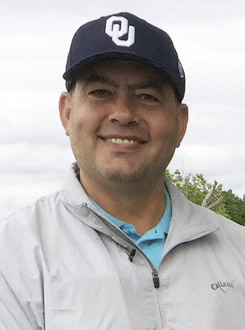 Vehicle Clasp. Dave was working at the time of his death for Northrop Grumman as a Senior Technical Trainer. Dave was always busy. He obtained his bachelor’s degree in business administration from Cameron University, was a musician,

golfer, gardener, carpenter and brewed his own beer and wine. He was a lifelong Cleveland Browns fan. He is survived by his

Flores, El Paso, Texas; nieces and nephew, Katie Urbina, El Paso, Texas, Zac Paris, Verona, Wisconsin and Abigail Farkas, Beulah, Michigan; as well as numerous other relatives. His father, David Joseph Lukasik, Sr., and his father-in-law, Raul Flores, Sr., preceded him in death. Memorial contributions may be made to the Juvenile Diabetes Research Foundation, 2212 NW 50th St, Oklahoma City, OK 73112. The date and time for a memorial service will be announced at a future date. An online guest book and sympathy cards are available at www.becker funeral.com.