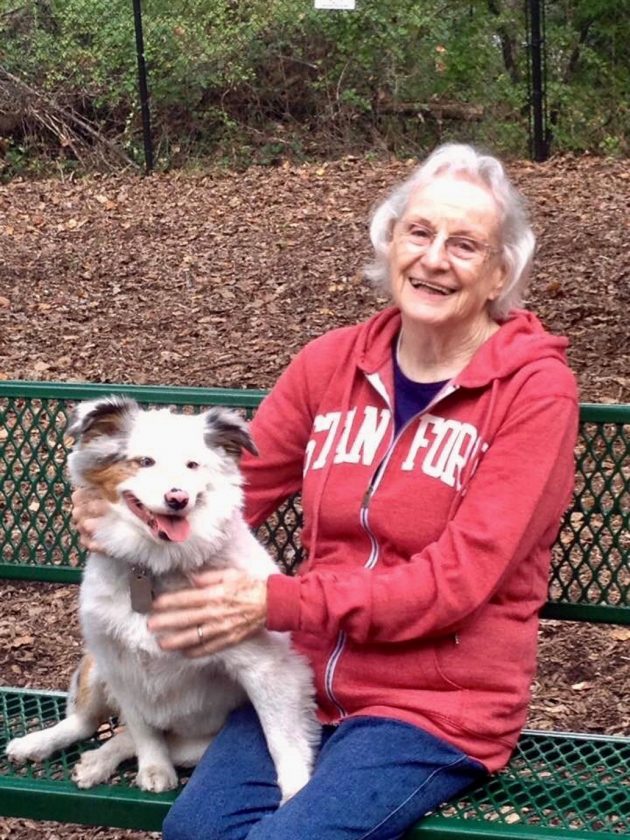 Anne Shirley Stebbins (nee Russell), an always smiling contributor to her community and matriarch to many, passed away peacefully June 30, 2019, after a short illness at the age of 86 in Mitchellville, MD, where she resided. She is survived by five sons – Russell Stebbins of Princeton, NJ, John Stebbins of Clarksville, TN, Peter Stebbins and his wife Meg of Boston, MA, Mark Stebbins of Clarksville, TN and Michael Stebbins and his husband Robert Harp of Cheverly, MD; seven grandchildren – Laura,

Matt, Emily, Sarah, Chris, Nick and Riley Stebbins; and her sister Dolores Pratt of San Antonio, TX. She was preceded in death by her husband Schuyler (Sky) Stebbins and son Douglas Stebbins. Shirley was born September 17, 1932, in Freeport, NY as one of five children of Guy Angus and Clothilde (nee Murphy) Russell who were of Scottish and Irish descent, respectively. Growing up on Long Island, Shirley attended Holy Redeemer Catholic school through 8th grade and graduated from Freeport High School in 1950. Shirley grew up during the Depression and was influenced by World War II, as her three older siblings served over-seas (and her aunt discovered that her German housekeeper had been communicating with German submarines in Long Island Sound!). With her friends and cousins, she would often visit New York City. As the family social butterfly, her family half expected her to live in the City eventually. She worked summers at the world-famous Jones Beach on Long Island. She graduated from Oneonta Teachers College (now SUNY Oneonta) where she was a member of Arethusa Sorority. From there she taught at Cazenovia elementary school for one year in upstate NY. She met a small-town farmer Schuyler Stebbins at a Cornell football game and fell in love. Eventually, they married and moved to Silver Creek on the shores of Lake Erie, settling on Stebbins Road with its family grape farm and apple orchards dating to 1803. There, she was a critical part of the roadside farm stand operation, helping to polish, sort and pack apples in the garage and sold along with peaches, pears, cherries, and plums in the fruit stand in the front yard, replete with a ‘make your own change’ cash box. A natural conversationalist with a thirst for knowledge, Shirley taught elementary school before and after raising her own children and consistently tried to impart knowledge to others throughout her life, whether sending along clippings, telling stories, or just informing those around her (including strangers) of useful information. In that same vein, Shirley was a long time board member of the Friends of Anderson Lee Library in Silver Creek, a town of 3,000. Similarly, she was a member of the Fortnightly Club – a group of two dozen women who met every two weeks for decades to review and discuss the latest in non-fiction books and educational topics. Other examples of her community leadership were her involvement in the Bishops Committee of the Diocese of Buffalo (which helped modernize the Catholic Church during the turbulent 1970s) and with the Health Systems Agency of Western New York (which helped address the challenges facing the health care and hospital systems in Western New York in the 1970s and 1980s by providing recommendations for hospital closures, con-solidations, and bed reductions).Shirley was a magnetic mother – and not only to her own sons. Through her local parish, Our Lady of Mount Carmel Catholic Church, she hosted summer exchange students from Mexico and Ecuador several times. Never one to say no to a social event, she threw open her house for parties (with and without her knowledge) at every age – featuring a ballfield with backstop, two basements, a garage and a backyard, was a Cub Scout den mother and anxiously greeted the dozen or so grimy teenagers working on the farm for lunch to eat and invade her living room to sleep. Of special note as honorarychildren are her nephew David Pratt who lived with her family for his last years of high school and family friend Pat Livecchi who continued to correspond religiously up to the end. As the six boys at home started to thin out, she began teaching grade school

up the road in Forestville. There she was known for being the school mom -mentoring teachers and students alike, to be better at

whatever they were doing whether it be academics or life – and for her immense knowledge, through which she gave topics depth and meaning well beyond what the textbooks could. After retiring from teaching at Forestville Elementary School, she and Schuyler sold the farm in the late 90s and moved to Kilmarnock, VA, on the Chesapeake Bay, where they built a life and contributed to the community through running the local Interfaith Furniture warehouse which collected furniture for distribution to those in need. She and her husband were active in the Northumberland County Democratic Committee. She also was a docent at

Christ Church, a historically significant brick Episcopal church in Weems, VA, built in 1732 – perfect for a conversationalist sharing knowledge. Shirley eventually did become the City Girl her family thought she would be when she moved to Washington, DC, upon Sky’s passing to be closer to her

youngest son, Michael. From a base in Friendship Heights, she upgraded her wardrobe and became a devotee of all the museums, concerts, culture and people-watching DC has to offer. She walked or took the metro or bus everywhere. At Friendship Terrace Senior Living, she was a social force reverting to her younger days, as reflected in her organizing and throwing increasingly involved monthly birthday parties. Though slowed down eventually, Shirley continued to the very end to smile infectiously to friends and strangers alike and to think positively about the world and the people she was with. She was loyal to her friends and family and very proud of her family and their friends (many of whom she helped shaped). The staff at Collington retirement and continuing care community, where she lived the last four years of her life, noted that she al-ways had a smile on her face and waved hello to everyone she encountered. The family has heard from many, including her former students over the years, about the impact she had them. Her family is proud of this amazing woman – especially of the example she set of connecting with

others, of assuming the best in people, of valuing knowledge, of having a zest for life, her sense of humor, and of smiling! To honor Shirley’s life and in lieu of flowers, contributions can be made to either Friends of the Anderson-Lee Library, 43 Main Street, Silver Creek, NY 14136 or to the SCCS Stebbins Scholarship Fund c/o Silver Creek Central School at 1 Dickinson Street, Silver Creek, NY 14136. There will be two memorial services celebrating her life. The first will be held at St. Elizabeth Ann

Seton Catholic Church in Crofton, MD, at 11 a.m. on Saturday, July 13 and there will be a graveside service at the family plot in the Evergreen Lawn Cemetery in Silver Creek, NY, on August 3rd, with further details to be announced.