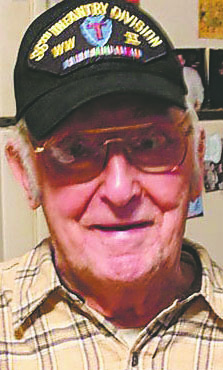 A World War II veteran who served in the 141st Infantry Regiment 36th Division, he was awarded the European-African-Middle Eastern Theater Ribbon, Bronze Star, Combat Infantry badge, and the Combat Medical Badge. He was injured and sent back to the states where he served as camp medic for over 400 enlisted men and German prisoners at the Prisoner of war camp at the Fairgrounds on Central Ave. in Dunkirk.

He enjoyed hunting, metal detecting, fishing, camping and anything outdoors.

And most of all his wife of 74 years Ardeene (Jankowski) Lisa.

He was employed at the U.S. Postal service in Blasdell and retired after 25 years of service. And prior to that he worked at the Alco plant in Dunkirk till its closing.

Relatives and friends are welcome to call today from 12 noon to 2 p.m. at the R. Mackowiak Funeral Home Inc., 56 E Doughty Street, Dunkirk, where funeral services will be held at 2 p.m. The Rev. Jan Trela will celebrate Christian services.

Interment will be in St. Hewdig’s Cemetery.