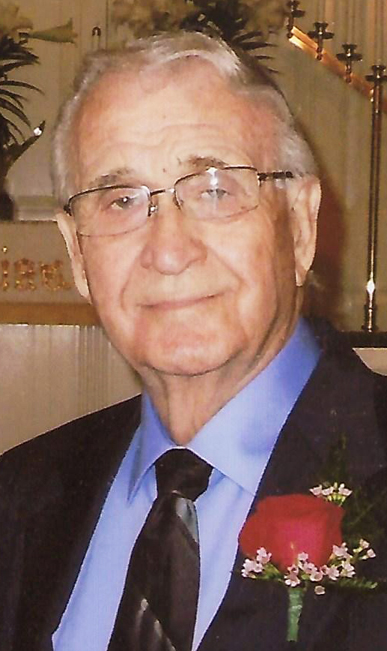 It is with great sadness we announce that Heaven’s gates opened and Frederick Long stepped through and entered the holy embrace of the Lord. Fred passed peacefully, in his sleep, of natural causes, during the wee hours of May 18, 2020 at the age of 91.

Fred was born in Dunkirk on January 25, 1929, the youngest child of Carl and Henrietta (Wingertszahn) Long. He recalled fondly of growing up in a family filled with love and laughter. His childhood home was a constant flurry of activity filled with friends and family. He used to say it was the greatest time to grow up. It was in his younger years that Fred acquired the nickname Pete from his father, and it carried with him throughout his life.

Fred attended Dunkirk High School and graduated with the Class of 1947. During his high school years Fred was immersed in sports and was known to be quite a gifted athlete. He excelled as a running back on the varsity football team, was an accomplished basketball player, and a notable hurdler on the track team. He earned Letters in all three sports. Fred later played City League Basketball. He also played City League Softball where he was noted by many as one of the best in league.

Fred went on to serve his country. He enlisted in the United States Army during the Korean Conflict. He was assigned to the Army Security Agency (ASA), which was comprised of Army soldiers specially trained in military intelligence.

Upon leaving the Army, Fred continued to serve his community as a member of the Dunkirk Police Department from 1952 to 1960. Back in the day, Fred used to walk the beat in the bustling downtown area and sometimes he would direct traffic. One day a pretty young woman crossed in front of him and caught his eye. He did some detective work, found out her name was Mary Ann Schwerk, of Silver Creek, and he eventually asked her out. The rest is history. They married on June 22, 1957, at the Zion Lutheran Church in Silver Creek. The young couple went on to have three children and eventually moved into the house on the Avenue. And, just like his parents, Fred and Mary Ann soon had a flurry of activity of family and friends at their house. It was a great neighborhood filled with wonderful neighbors and lots of children and the whole group became known as “The Corner”. They held neighborhood parties, hung out in everyone’s yards and became quite a close-knit group.

When Fred left the police force, he went to work at Greater Buffalo Press, working in the mat layout department and pressman until his retirement.

Fred became active in Little League when his sons started to play ball. He coached for one year and then managed the Lakeside Club team for a span of 10 years. He thoroughly enjoyed this time of his life spent with his sons. He loved working with all the kids on his team, helping them develop the skills to not only make them good ball players but, more importantly, good team players. The Lakeside Club even went on to capture the League Championship one year. When his sons moved on to Babe Ruth and eventually City League softball Fred and Mary Ann never missed a game. He enjoyed watching professional sports as well. He was an avid Dallas Cowboys, Cleveland Indian, Michigan State, and LA Lakers fan.

Fred and his daughter shared a very close bond and spent many an hour together. Fred loved to drive along the lake and throughout the city reminiscing of times when he grew up. They often drove through Point Gratiot where they would enjoy sunsets and walks. They set out on adventures together travelling to Philadelphia, Boston, New York City, and Cleveland. They spent 5 days in Washington DC, visiting the White House, Capital, Arlington Cemetery, Mount Vernon, and all the monuments. It was the same destination he and Mary Ann had enjoyed on their honeymoon many years before.

But nothing touched his heart more than the birth of his granddaughter. He and Mary Ann were blessed to have spent a great deal of time with her as a child. They were ever-present throughout her school years and all her cheerleading activities. The birth of their two great grandsons were a further blessing Fred was grateful to enjoy.

Fred loved to work in his yard. He would be out there for hours working on his flowers, sprucing up the gardens, and manicuring the lawn. He grew his Morning Glories every year, meticulously stringing them and nurturing them until they were a sight to behold! He also took pride in his clematis vines that were sprinkled throughout the yard.

Fred had a true compassion for animals. He and Mary Ann have rescued well over 40 cats (and 1 dog) through the years. Most were adopted into their own home. They also had Bassett Hounds when the kids were younger.

But most of all, Fred loved people. He always had a smile and kind word to all he met. He will always be remembered for his soft-spoken, easygoing, and humble manner. He had an incredible gift of gab and could spends hours talking with friends, neighbors, and family. Fred was a guy everyone enjoyed seeing and hanging out with. His quick wit and humor were enjoyed by all. He was a good man who lived a good life in an honorable fashion. We always felt blessed, and proud, to have him as our patriarch.

Fred was a devoted and loving husband. He and Mary Ann were married just shy of 63 years and they shared a love that was deep and abiding. They were truly each other’s soul mate and were inseparable. As a father, grandpa, and great grandpa he couldn’t be beat. He loved with all his heart, was always affectionate, and provided unending support and wisdom through the years. He was a gentle man, and a true gentleman, He left this world the way he lived, with grace and dignity. He will be deeply missed.

Besides his parents, Fred was preceded in death by his sisters June (Donald) Kochersberger, and Lorraine D. Long, his brother Carl (Helen Pietrkiewicz) Long, Jr, and his nephew Carl R Long, III.

He is survived by his loving wife, Mary Ann (Schwerk) Long, his two sons, Frederick C. Long Jr, of Dunkirk, Mitchell E. Long, of Fredonia, one daughter, Leslie A. Long (Bill Carlson), of Dunkirk, one granddaughter, Lindsey A. (Bobby) Long Peting, and 2 great grand-sons, Andrew Bigelow and Brayden Peting, all of Fredonia. He is also survived by many nieces and nephews, and cousins.

Arrangements for a family burial, with military honors, were made through the LARSON-TIMKO Funeral Home. Online condolences can be made at larsontimkofuneralhome.com. Memorials may be made to the Lakeshore Humane Society in Dunkirk.