This land, and park, is made for you and me 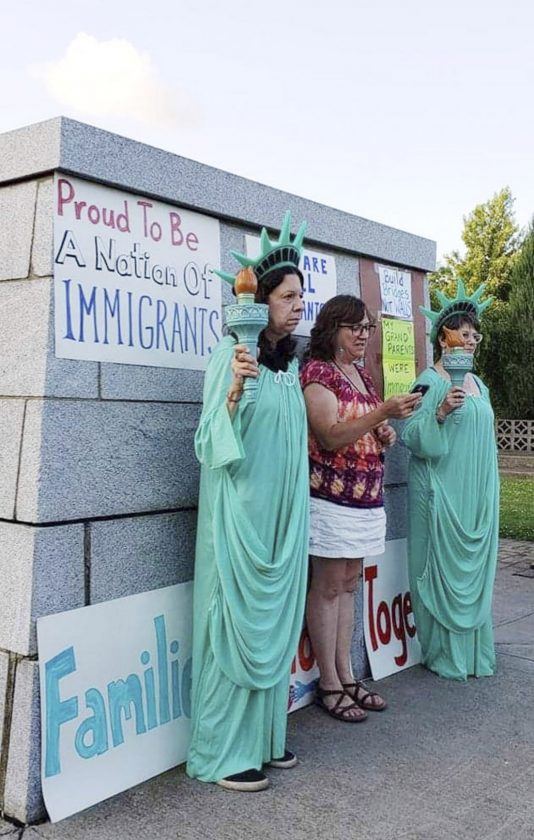 A Lights for Liberty vigil was held in Memorial Park in Dunkirk in July.

The men and women who served our country in various wars did so to protect one thing and one thing only — our democracy and the Constitution that maintains rule of law. They fought against foreign tyrants and dictators and feeble minded dolts who trashed their own countries, led foolish followers down a wrong headed pathway to destroy other countries and ultimately their own country. Those men and women also fought against internal enemies who would distrust and diminish our democracy — the Joe McCarthys, the KKK, the white nationalist terrorists.

I think especially of World War II when a far right ultra conservative white nationalist named Adolf Hitler rose to power by claiming he would make his country great and would eliminate the “evil” Jews who were the cause of Germany’s decline. Wrong headed people followed Hitler and his mad rampage to suppress the rights of anyone not like himself (funny, isn’t it, that Hitler proposed white blue eyed blonde Germans to be the “best” but he himself was not blue eyed nor blond). We fought Japan’s Emperor Hirohito and Italy’s Mussolini and others like them.

Our country in turn was led by men like Abraham Lincoln, who fought to stop defiant white nationalists who believed they had yet right to rebel and limit the rights of others, specifically black slaves. I think of Franklin Roosevelt, who led this nation to defeat Hitler and his wrong-headed cult followers. Those men and the soldiers who labored under their roles as commander-in-chief — those men fought for one thing and one thing only. They fought for our democracy and the Constitution that keeps it a democracy.

So those who are honored in Memorial Parks and hundreds of parks like it across the nation helped our democracy remain free, and one of our great rights is that of free speech. And what better place for those who wish to defend our democracy than the very place where men and women are honored for their service to that constitution. Forces of evil seek to limit the rights of others under the present administration in Washington — they scare people into thinking “illegal immigrants” are the greatest threat when the greatest threat is the administration’s mysterious connection with a foreign power and the very corrupt leadership itself.

Memorial Park is not a cemetery. It is a park. In its early history it was part of a dirty waterfront, part of the city’s bustling fishing industry, part of “the lagoon” where boat races were held. In 1927 the world tallest one piece flagpole (138 feet, 8,000 pounds) was erected there, a gift of a Douglas fir from former Dunkirk resident J.T. Heffernan to Dunkirk resident Robert Gross and in turn gifted to the city. For a while a line of wooden stumps held back the shore’s water, and the city had plans to modernize the area as a true park. The city sold bonds to improve the entire area from harbor to park. The area was stabilized and a concrete wall built, but these plans faltered until H.C. Hequembourg, whose own son would be fatally injured in a crash of military airplane in which he was training, donated $5,000 to complete the park with final landscaping.

In 1936 a weather signal tower stood in the park. The water treatment plant stands at the edge of the park. The city’s yacht club sits on its edge as well. People stop as they pass through the city and picnic there. Various organizations have held events there, from those involving Dunkirk to Dunkerque Day in 1946 to present day events held under tents.

And on every Fourth of July that I can remember “we the people” as a city join the nation in holding a big party in Memorial Park, a party with balloons and food and a lot of noise, a party that celebrates our democracy that allows protesters to protest against threats to our democracy.

People bring their blankets and their chairs and their kids and watch the fireworks. It is a park of the people. There is no “disturbance” there that I can see, but only celebrations of the people, by the people and for the people.

When I initially thought of this headline, I thought of the novel coronavirus pandemic that has affected the entire ...

“Who was that masked man?” Citizens of an old west town would ask as the Lone Ranger rode out of sight on our ...

I am blessed with birds that have color even in the drabbest days of mid-winter. The cardinal is a regular, if ...

Last article, we met Aida, a married woman working in the corporate world. Her job called for travel and time away ...