A few weeks ago, I was contacted by Andy Ludwig, principal of Northern Chautauqua Catholic School, and Vince Fogerty, teacher at NCCS of the sciences. The group of boys and girls I was to talk to were from fifth grade to eighth grade. When I arrived at the school, I was greeted warmly and introduced to 45 boys and girls.

Having attended Sacred Heart School from 1948 to 1956, I felt I had been transported back to a time that was golden. At that time, the Sisters of Saint Joseph were our teachers, and it wasn’t uncommon to go through eight grades and never have a lay teacher. Thus began my pitch to them. The group was split with a few more girls than boys. The first thing that grabbed my attention, was their attention. I’ve been in schools where kids are lying all over the place with no attention span.

I stated to them that I had been a chemical dependency counselor, certified by the state of New York for the past 30 years.

I asked the group if any of them knew what Juul was, and almost every hand went up. These children are between the ages of 9 to 13. I would doubt that some adults would know what this “vaping” product was. I said to them, “Most of you have no idea that you are targeted for financial gain from the shoe, clothing, food and recreation companies. You are a target for money, their messages and ads are propaganda that need to be recognized. I can forgive these companies because it’s business and I’ve been in sales for 40 years. What I can’t forgive is the selling of these vaping products to underage children, as young as 12.”

When the “vaping” craze started, the age to buy them was 18. It’s now 21. The 14-, 15- and 16-year-olds were able to get the vaping cartridges from the older kids. The cartridges in the beginning were made by the vaping companies with few problems, even though our kids shouldn’t have been using them. What caused the major problems were the cartridges coming from “across the pond” from China, Malaysia, Taiwan, Japan. These cartridges are “poison” loaded with marijuana oil, synthetic fentanyl, kerosene and a multitude of other chemicals. The reasons the lung problems have sky-rocketed is these drugs in the vaping products. It is now estimated that 37% of our high school students vape on a regular basis.

The chemicals in these vaping products are not for “experimentation.” The marijuana of the Jimi Hendrix era of the 1960s is not the marijuana of today. The game changer is synthetic fentanyl that is made in labs and changes the properties 100 times greater than the drug itself. We have had in the country more than 500,000 overdose deaths due to fentanyl being added to heroin, cocaine, marijuana and other drugs. If it wasn’t for Narcan, a drug to revive people that overdose, it would be much higher. The group was riveted on me, maybe a little stunned, but very attentive.

I then went on to tell them about a football player I worked with that had been an All-American at Michigan State. Herman was 6-foot-11, 365 pounds. He ran the 40 under 5. He was strong as an ox. He had been drafted by the Green Bay Packers when Brett Favre was the quarterback. Herman slept through the try-out, due to going on a “cocaine run” the night before. They cut him without a tryout and other teams were alerted that he had a drug problem. He never got another shot at making it in the NFL at that time. The sad thing was that he was one of the nicest kids I had ever worked with. The good news is that he got sober and coaches football at one of the southern African American colleges.

I now opened the class for questions, and there were many. This was a refreshing lesson, because often in my REBT class I will ask, “Is there anyone who has an issue, problem or concern that they would like to share or ask for help from the group?” Ninety percent of the time, silence is all I hear. These were elementary school children showing care and concern for themselves and others.

A few weeks later, I received a poster and a letter signed by all the kids in that groups, stating in big letters “YOU ROCK” with thank yous and short testimonials about never knowing how deadly today’s drugs can be. I have no affiliation with NCCS, other than speaking there. However, after meeting these children and the staff at NCCS, if our five children were attending school today, they would be a part of Mr. Ludwig’s group at NCCS. I say this because of the moral values being taught, the self-discipline being instilled by a great teaching staff and the spirituality and presence of God in this school.

Mr. Ludwig asked me in front of the group of what role God played in my sobriety. I simply said, “a person may get sober, but without God or spirituality, they won’t stay sober.” The recovery rate for people that get sober and never use alcohol or other drugs again is 9%. Figure this one out for those of you who are teaching “harm reduction.” Sad.

We concluded the group with Tom Petty’s “I Won’t Back Down.”

Mike Tramuta has been a CASAC counselor for more than 30 years and currently runs the REBT program on Thursday nights at the Holy Trinity Parish Center from 7 to 8:15 p.m. Call 983-1592 for more information. 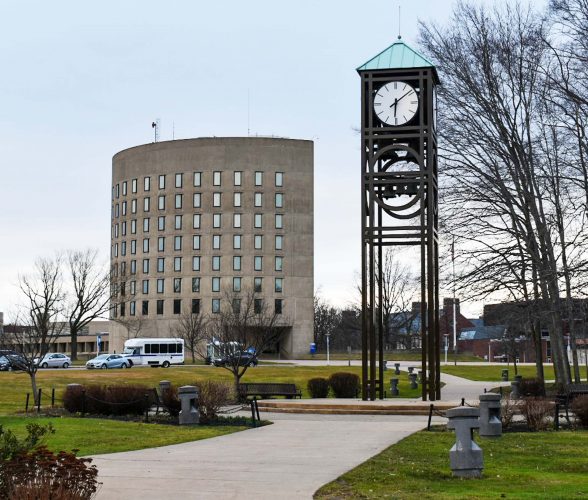